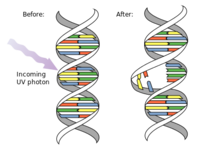 Theodore Beale wrote: "This would also put Bruce Charlton's Mouse Utopia observations into context, as atheism appears to be one aspect of the nihilistic despair that is a consequence of the increased prevalence of genetic inferiority that results from easier circumstances."[10]

Dr. Neil Whitehead writes about left-handedness and homosexuality: "..everyone knows that left-handed people feel in a minority, and different. Very many homosexual people attest to feeling different and not belonging when they were growing up.. Left-handedness could increase feelings of difference and be one important factor in the complex leading to homosexuality. This could apply to both men and women and the authors quote a study in which non-right-handed women rated themselves as less feminine."[11]