Believing in God can help block anxiety and minimize stress, according to new University of Toronto research that shows distinct brain differences between believers and non-believers.[1] See: Atheism and the brain

Below is information related to atheism and anxiety.

According to the researchers Wink and Scott, the irreligious fear death more than the very religious, but fear it less than the lukewarm/moderately religious.[2]

(Under stress, the brain's processing works in a way that prefers unconscious thinking.[5]) See also: Atheism and the brain

For more information on death anxiety in atheists and other types of individuals based on brain research studies (including studies that examined the effects of stress), please see the article: Atheism and death Jean Paul Sartre was a prominent proponent of existentialism.

Existentialism is a philosophical system that originated in the 19th century, and grew in the 20th century, that focuses on the individual striving in a seemingly meaningless universe if one rejects the biblical worldview, and how (and if) one is able to come into grips with this (see: Atheism and meaninglessness). Existentialism, though denying an objective meaning to life, believes that we as individuals can create our own subjective meaning of life, which differs it from nihilism which believes in neither.

Existential angst (or existential crisis, existential despair), is one of the key concepts in existential philosophy, and it means the crisis that one feels when confronted with a seemingly meaningless Universe, along wth the realization that one has free will to make one's own choices. This is illustrated by one standing on the edge of a cliff, looking down, and then realizing that nothing is holding you back from jumping off. The emotions which arise from this revelation is called existential angst.[6]

Existential angst is much more likely to happen in gifted children.[7] See also: Theophobia and Atheism and hatred of God

Atheism and fear of Hell

The journalist and ex-atheist Peter Hitchens and fear of Hell

The journalist and ex-atheist Peter Hitchens, who is the brother of the late atheist Christopher Hitchens, said upon seeing an art exhibit of Michelangelo's painting The Last Judgment he came to the realization that he might be judged which startled him.[10] This started a train of thought within Peter Hichens that eventually led him to become a Christian.[11]

Atheist/nonreligious and fear of conservative Christians 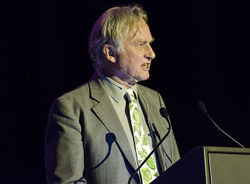 The Oxford University Professor Daniel Came wrote to the New Atheist Richard Dawkins:: "The absence of a debate with the foremost apologist for Christian theism is a glaring omission on your CV and is of course apt to be interpreted as cowardice on your part."[17]

As far as Christianity vs. atheism public debates, in recent years there have been a number of notable instances of atheists doing poorly in debates (see: Atheism vs. Christianity debates).

Beginning in the latter part of the 20th century, there were a number of notable instances of prominent atheists being reluctant/afraid to debate (see: Atheism and cowardice).[18]

On May 14, 2011, the British newspaper The Daily Telegraph published a news story entitled Richard Dawkins accused of cowardice for refusing to debate existence of God.[17]

In The Daily Telegraph article Dr. Daniel Came, a member of the Faculty of Philosophy at Oxford University was quoted as writing to fellow atheist Richard Dawkins concerning his refusal to debate Dr. William Lane Craig, "The absence of a debate with the foremost apologist for Christian theism is a glaring omission on your CV and is of course apt to be interpreted as cowardice on your part."[17]

Religion and the elimination/mitigation of anxieties

Concerning atheism and health, there is considerable amount of scientific evidence that suggest that theism is more conducive to mental and physical health than atheism.[19] The Christian Post reporter Stoyan Zaimov wrote:Double-blind prayer experiments: where people pray for others with terminal illness. Habermas admitted that most such experiments have not worked, but the three that he knows of that have indeed worked were cases of orthodox-Christians praying for the sick.[20] See: Studies on prayer

For example, the abstract for the journal article entitled Religious comfort and anxiety in women with cancer: The mediating role of hope and moderating role of religious struggle published in the journal Psychooncology indicates: "Religion appears to protect against developing anxiety because it enhances hope."[21]

See: Atheism and cancer and Irreligion and recovery from illnesses

The Christian apologist Gary Habermas wrote: "Double-blind prayer experiments: where people pray for others with terminal illness. Habermas admitted that most such experiments have not worked, but the three that he knows of that have indeed worked were cases of orthodox-Christians praying for the sick."[23]