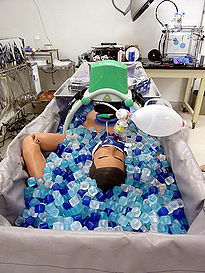 The adherents of cryonics put the deceased person in cryonic suspension via cooling and perfusing the corpse with cryoprotective solutions.[1][2]

Cryonics is a pseudoscience that tries to extend life or achieve immortality in a non-theistic way after a person is legally dead (Cryonic procedures are performed shortly after a person's death).[3][4] See also: Atheism and death

Robert Ettinger was an atheist and American academic who some consider to be "the father of cryonics" because of the impact of his 1962 book The Prospect of Immortality.[5][6] Evan Cooper was also a founding father of the cryonics movement.[7] Cooper was a very private man and there may be no record of his worldview as far as whether he was an atheist, agnostic or theist.[8] Evan Cooper abandoned the cryonics movement after he felt that the extension of life through cryonics would not be achievable in his lifetime.[9]

According to The Cryonics Society:

Isaac Asimov was a popular American science fiction writer and a professor of biochemistry at Boston University. He was also an atheist.[11] According to The Cryonics Society, Asimov said of cryonics, "Though no one can quantify the probability of cryonics working, I estimate it is at least 90%..."[12]

The atheist and American cognitive scientist Marvin Minsky was one of 63 scientists who signed an open letter endorsing the concept of cryonics.[13][14] Larry King is an atheist.[15][16] In 2011, The Telegraph in an article entitled On Larry King and an atheist's fear of death reported about the atheist Larry King, "Larry King, the former CNN broadcaster, made the news this morning after saying he wants to be frozen after his death, so that he can be revived when medical technology improves.[17]

Michael Shermer and other atheist/agnostic critics of cryonics

Today, the atheist/agnostic community is largely skeptical of the cryonics movement. For example, in 2001, the atheist/agnostic Michael Shermer said of cryonics, "Is it? That depends on how much time, effort and money ($120,000 for a full-body freeze or $50,000 for just the head) you are willing to invest for odds of success only slightly higher than zero... I want to believe the cryonicists. Really I do. I gave up on religion in college, but I often slip back into my former evangelical fervor, now directed toward the wonders of science and nature."[18]

The atheist worldview cannot explain the existence of consciousness either and the theistic worldview can offer a reasonable explanation (see also: Atheism and irrationality).[19]