From Conservapedia
(Redirected from Zhengli Shi)
Jump to: navigation, search

Dr. Shi Zhengli (also Zhengli-Li Shi) is a Chinese virologist at the Wuhan Institute of Virology, part of the Chinese Academy of Sciences (CASS) which is under the control of the Chinese Communist Party's Central Commission for Discipline Inspection (CCDI).[1] 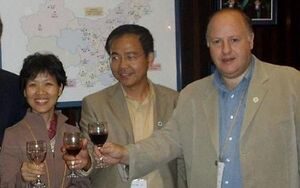 Since the SARS outbreak in 2003, Shi Zhengli had been conducting research on coronaviruses. From 2010 onward, the focus of Shi and her team, was redirected to identifying the capacity for coronavirus transmission across species, specifically putting the spotlight on the S protein of the coronaviruses. Her team's research in the Wuhan virology lab, has been looking into the part that can make coronaviruses transmittable to humans.

In June, 2010, a team including Shi Zhengli, published a paper. It described research to understand the susceptibility of angiotensin converting enzyme 2 ACE-2 proteins, of different bat species to the S Protein of the SARS virus. In the experiments, they also modified key amino acid codons to mutate the bats ACE-2 to examine compatibility with the SARS S Protein. This paper demonstrated their awareness of the special relationship between the S Protein and the ACE-2 receptor. It also signified that Shi had unearthed the passageway for coronaviruses into human bodies.

In October, 2013, Shi and her team published a paper in Nature. They claimed a breakthrough in coronavirus research. They successfully isolated three viruses from bats, one of which had a S Protein that integrated with human ACE-2 receptors. This effectively demonstrated the direct human infection of SARS-like viruses to humans, without the need of an intermediate host.

Then in November, 2015, Shi and her team at the Wuhan virology lab once again published a paper. This time in the British journal, Nature Medicine.[2] They discussed the creation of a synthetic virus, a self-replicating Chimeric virus. This virus had the SARS virus as the framework, with the key S protein replaced, by the one they had found in a bat coronavirus, she mentioned in her 2013 paper. This new virus demonstrated a powerful ability for cross-species infection.

The mice infected with the synthetic virus revealed severe lung damage with no cure. This symbolized that Shi's successful splicing of the SARS virus, was a key to open the door to the cross-species transmission. They planned to further experiment on primates, although Shi Zhengli did not indicate any conclusion from this research. Her move to research on primates wasn't done without controversy. Shi's experiments quickly triggered widespread debates from the academic community. Simon Wain-Hobson of the Pasteur Institute in France, expressed deep concerns. He told Nature, "If the new virus escaped, nobody could predict the trajectory. Propagation could happen anywhere."[3]

Mark Zuckerberg's "Zuckerbucks" was laundered through the Chan Zuckerberg Initiative (CZI). CZI gave $433,000 to Ralph Baric,[4] who was described by Shi Zhengli as her “longtime collaborator” on gain-of-function research on the bat coronavirus.[5]

On November 14, 2018, Shi Zhengli spoke at the School of Life Sciences and Biotechnology at Shanghai Jiao Tong University. The topic was, Bat coronavirus and its cross species infection. Reports of this event have since been deleted from the University website.

After the Wuhan outbreak, Indian researchers compared the S Protein sequence between 2019-nCoV (Wuhan coronavirus) and SARS. They discovered that 2019-nCoV (Wuhan coronavirus) had four new sequences inserted, all of which can be found in HIV sequences, through a search on GenBank.[6] Shi Zhengli discredited those observations, although she never denied the existence of the four inserted sequences. However, scientists probing GenBank, found that there were only three viruses containing all sequences. The first is the HIV virus itself. The second is a bat coronavirus discovered by Shi, and the third is the Wuhan coronavirus. On January 23, 2020 the Wuhan virus exploded. While Wuhan announced the lockdown of the city, Dr. Shi Zhengli published a paper in the authoritative science journal, Nature on February 3, 2020 stating that the Wuhan coronavirus was of probable bat origin.[7] The paper indicated that the Wuhan virus utilized the same key as SARS to gain entry into the human body. She also announced the 2019-nCoV genome sequence was 96.2% consistent with a bat coronavirus originating in Yunnan, China, called RaTG13, signaling a natural source of the Wuhan virus.[8]

Shi Zhengli wrote on social media that those spreading rumors about her lab leaking the virus should "shut their stinking mouths."[9]