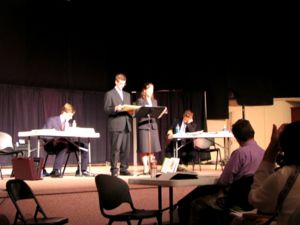 A cross examination at one of the 2007 NCFCA national quarterfinal debates.

In 1996, the Home School Legal Defense Association Chairman, Michael P. Farris, and his daughter Cristy, formed a debate league. It soon began to grow, so much so, that in 2001 it formed its own league, the National Christian Forensic and Communication Association. In addition to becoming independent, NCFCA added Speech and Lincoln-Douglas debate to its competitions.

NCFCA states that its goal is to,

NCFCA is split into ten different regions. Each region has region coordinators, which govern their region. The regions themselves are also split into state coordinators.

The tournament structure for NCFCA is similar to a sports season. There are three levels of tournament competition.

Each region hosts its own tournaments which consist of only competitors from its region. There are only two exceptions to this. The first is a national open, this is a tournament that is open to all regions, and no prior qualification is needed to participate. National Opens give debaters the chance to qualify directly to Nationals (usually two to three slots are handed out for each speech or debate category). The second exception is nationals itself which is not held by any region and represents all ten.

The tournament structure is based on the amount of competitors. All tournaments have to two basic sections, "preliminary rounds"(6 rounds for debate) and "out rounds"( which can either be 3-4 rounds).

NCFCA members vote on the seasons debate topics and the winning resolution are announced at the end of the national tournament each year.