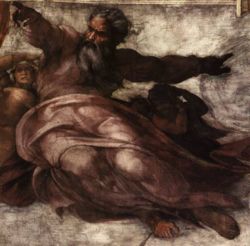 Creation refers either to that which has been created, e.g. Mark 16:15, “Preach the Gospel to the whole creation,” or to the moment or process by which God created, e.g. Genesis is the creation account. This article deals with the second meaning, according to Christian faith. According the Gallup organization, thirty-eight percent of Americans of Americans are creationists.[1] In Europe, Switzerland has one of the highest rates of creationism.[2]

Creation scientists also demonstrate that the theory of evolution is in conflict with the evidence provided by the physical sciences and often cite secular scientific sources which agree with them on various points (for further details please see: theory of evolution).[3] Theistic evolutionists accept an old Earth and believe that evolution occurred, but that it was God’s means of creation.

The first verse of the Bible distinguishes God from the heaven and the earth. The theological discussion of this distinction falls under the named topic of transcendence, and the key philosophical concept with regard to God and creation is the two categories of existence (with regard to causes, or rather sources, of being): a se—from itself and ab alio—from another. That is, God's existence is from God's self while creation's existence is from another.

The late Dr. Henry Morris was the founder of the Institute for Creation Research (ICR), who coined the term “creation science” and began the modern creation science movement. He was a scientist and held a master's degree and a PhD in hydraulic engineering from the University of Minnesota. Dr. Duane Gish, now retired, was a scientist (chemistry), a member of ICR, and a prolific debater for the Young Earth creationist cause. Dr. Henry Morris said of Gish, “at least in our judgment and that of most in the audiences, he always wins.”

Dr. Jonathan Sarfati is a scientist (chemistry), chess champion, and Young Earth creationist, who works for Creation Ministries International in Australia. He has written a number of books refuting evolutionary arguments and various theological arguments that try and accommodate evolution or an old Earth.

Ken Ham is a Young Earth creationist, a founder of the American branch of Answers in Genesis, and prime mover of the Petersburg, Kentucky Creation Museum.

Dr. Hugh Ross is a scientist (astronomy), a progressive creationist, and founder of Reasons to Believe. He considers nature to be the 67th book of the Bible.

The teachings of Judaism are based on Genesis, as in Christianity; however, significant liberal Jewish authorities also believe in the theory of evolution, and that this theory is not incompatible with biblical accounts of creation.[4]

Hindus believe that Brahma, one of their three principal deities, created the universe, while Vishnu is the preserver of the universe.[5] Hinduism has its own form of evolution, and is generally considered to be compatible with the current "scientific" theory of evolution.[6]

Source of the Universe in Buddhism

The Buddhist conception of the "source", substratum, "womb" or "matrix" of the universe is referred to by the Sanskrit term "Garbha" as seen in one of the three Sanskrit words for the "ultimate": 1. "Dharmakaya", 2. "Tathagata Garbha" and 3. "Dharma Dhatu". These three words are all represented by the word "Dharma". These are the ultimate reality that one realizes at enlightenment. These three Sanskrit words (especially "Dharmakaya") is the closest concept that Mahayana Buddhism has that fairly closely resembles the Judeo-Christian "creator God" although it is not accepted by Theravada Buddhists and is not well known among most common Buddhists who are neither serious scholars nor practitioners of the religion. This is why both many non-Buddhists and liberal beginner "Buddhists in name only" (see RINO) especially in America, misunderstand Buddhism thinking it denies the existence of God or a primary causative being of the universe. Those who suggest this misconception have not studied Buddhist esoteric Sutra teachings on these three terms "Dharmakaya" - "Tathagata Garbha" - "Dharma Dhatu". These terms imply timeless, eternality, omniscience, omnipotence, omnipresence, inscrutability and immutability.

Muslims attribute creation of the universe to Allah. The Qur'an does not have one cohesive story of creation, but it does say that the Earth and the rest of the universe were created over six "days," which may not be the same length of time as a modern day.[7] "Young-Earth creationism is wholly absent in the Muslim world."[8]

Versions of creation in ancient, indigenous, Eastern shamanic, and relatively obscure religions are often referred to as "creation stories" or "creation myths." (Note: in this usage, the word "myth" does not necessarily imply that the story is untrue, but that it is a traditional or legendary story.[9]) Here are some examples:[10][11]

There are many other creation stories that are much longer and more complex.

Creationists in the world

Europe's rejection of biblical Christianity, which accepts biblical creationism, explains why Europe is such a mess at this time (see also: Protestant Ethic and the Spirit of Capitalism).

Some prominent biblical creation magazines and journals are given below: