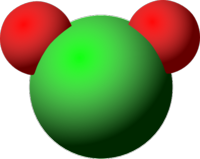 A model of a water molecule. The red spheres represent hydrogen, and the green sphere represents oxygen

Water is one of the most important chemical compounds because no living creature can survive without it. More than half of the weight of most organisms is water.[1]

Water is an odorless, tasteless, colorless liquid. When people describe the flavor of water they are referring to impurities found in it (see mineral water, bottled water).

The chemical formula for water is H2O. It is made up of two hydrogen atoms and one oxygen atom, or dihydrogen monoxide.

The shape of the water molecule is a shallow V, with the oxygen in the middle and having an angle of approximately 105°. Since oxygen is more electronegative than hydrogen, the interactions between the atoms result in the oxygen atom having a partly negative charge and the hydrogen atoms having a partly positive charge. Thus the water molecule is a strong electrical dipole, which accounts for some of its properties.

Although we are accustomed to think of the word "solvent" in connection with organic solvents like gasoline or benzene, water is a powerful solvent for many compounds, a fact that is sometimes overlooked because water is so familiar.

Water, compared to other compounds, has a number of unusual properties, such as expanding rather than contracting when it freezes. As noted by Lawrence Henderson in his 1913 book, The Fitness of the Environment, its ability to support life is directly related to some of these unusual properties. Water has the strongest hydrogen bonding of any known molecule. This is the reason why it is a liquid at room temperature despite its low molar mass. Hydrogen bonding also explains why water is less dense as a solid than a liquid. Water also has an unusually high heat capacity. Heat capacity is the ability of a substance to resist changes in temperature.

In 2017, a study (using a computer-generated model) determined that the earth probably produces its own water. In theory, the heat and pressure beneath the earth's mantle (25 to 250 miles deep) causes silicon to react with liquid hydrogen and form liquid water and silicon hydride.[2][3]

Saltwater is water with significant amounts of salt in it. It exists in oceans and lakes. Saltwater from the ocean has many different minerals and cannot be drunk, unless the water is desalinated and the salt removed (saltwater with ordinary table salt can be consumed in small amounts). Saltwater is known for its healing properties, with gargling of saltwater commonly used to treat sore throats.