Women are the female of the human species, with the biological role of bearing offspring (pregnancy and childbirth). In preparation for this role, women's breasts begin to grow at puberty, forming the most obvious physical difference between women and men other than the reproductive organs. Other differences include a layer of subcutaneous fat under the skin which hides the underlying musculature, and a wider pelvis to facilitate carrying the baby and allowing it to be born. Women also have a greater proportion of fine vellus hair over certain areas of their skin (such as their face and legs) than the coarse terminal hair which appears on men.[Citation Needed]

Men have typically two times more upper body strength than women, and around 50% more leg strength.[1] Women have slightly longer average lifespans than men, which results in women overtaking men in population by middle age despite a 1.05:1 boy to girl ratio at birth in the United States. This rate varies among countries.[Citation Needed]

Compared to men, fewer women have had impact on history as leaders in diverse fields, but large numbers of women have still had enormous impact. Mary Magdalene and other women were the first individuals to Jesus Christ after his resurrection.[2]

Dr. Jeff Myers in his book Understanding the Culture: A Survey of Social Engagement wrote about Christianity and women's rights:

Women in the Bible

Contrary to what many Liberals, Atheists, and Feminists like to say, the Bible does not devalue women.

The Bible says that women, like men, were created by God on the 6th day of Creation, as told in The Book of Genesis:

But from the beginning of the creation God made them male and female. Mark 10:6 (KJV)

Genesis further elaborates that God took a rib from Adam, the first man, and from it created Eve, the first woman, as a helper for Adam when the animals, which had been created for that purpose, proved unsuitable:

And the LORD God said, [It is] not good that the man should be alone; I will make him an help meet for him. And out of the ground the LORD God formed every beast of the field, and every fowl of the air; and brought [them] unto Adam to see what he would call them: and whatsoever Adam called every living creature, that [was] the name thereof. And Adam gave names to all cattle, and to the fowl of the air, and to every beast of the field; but for Adam there was not found an help meet for him. And the LORD God caused a deep sleep to fall upon Adam, and he slept: and he took one of his ribs, and closed up the flesh instead thereof; And the rib, which the LORD God had taken from man, made he a woman, and brought her unto the man. Genesis 2:18-22 (KJV)

According to some biblical literalists, Eve caused sin and suffering to come into the world when she convinced Adam to eat from The Tree of Knowledge, an act directly forbidden by God Himself. As punishment for this, God declared that women shall experience great pain in childbirth.[4]

New Testament statements on the role of women 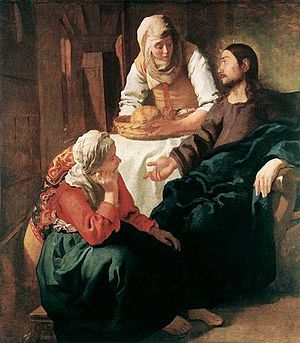 Jan Vermeer, Christ in the House of Martha and Mary.

Saint Paul also has much to say on the status of women in society, most memorably that women should submit to their husbands just as the church submits to Christ. [5] [6] [7] [8] Most of these things are not believed by even the strictest Christians, and such views are considered extreme by even the most conservative Christians.

The New Testament contains several instructions regarding the role of women:

These viewpoints are not widely accepted in secular, first-world nations, although some believers still adhere to them. However, Christians do not always agree on how literal or universal these directives are intended to be. For example, dressing modestly is interpreted by some Anabaptists to mean that women should only wear black or dull colors and that dresses should cover the entire arms and legs, whereas most non-Anabaptist Christians consider the directive to modesty as simply meaning that garments should not be wrongly provocative. The directive that women should not speak in church is regarded by some as being literal for all situations, but due to other New Testament passages which indicate that women were allowed to publicly testify in the early church,[18] the most common Christian interpretation[Citation Needed] of 1 Corinthians 14:34-35 is that women in the Corinthian church were in the habit of conversing casually and gossiping during the church service, and that the apostle Paul was telling them not to do that. However, that interpretation is at odds with the following Scripture passage:

Let the woman learn in silence with all subjection. But I suffer not a woman to teach, nor to usurp authority over the man, but to be in silence. For Adam was first formed, then Eve. And Adam was not deceived, but the woman being deceived was in the transgression. Notwithstanding she shall be saved in childbearing, if they continue in faith and charity and holiness with sobriety. 1Timothy 2:11-15 (KJV)

Another interpretation sees the silence of women being limited to the immediate context of the passage, namely the authoritative judgment of prophecy.

Let the prophets speak two or three, and let the other judge. 1Corinthians 14:29 (KJV)

Some Protestants[Who says?] believe these verses can be taken out of context and applied too legalistically. They believe that the church can conform legitimately to modern egalitarian ideals without sacrificing the literal meaning of these passages.

Strong and important women in the Bible

Among the Bible's several strong and empowered women are Deborah, the only female judge and ruler of Israel; Judith; and Queen Esther, heroine of the Book of Esther. In the New Testemant, Mary Magdalene and other women are disciples of Christ with whom He seems to have close friendships. The Virgin Mary is heavily revered in the Catholic and Orthodox churches.

The Old Testament law states that if a man sells his daughter into slavery there are specific conditions protecting her status.[19]

Studies indicate that women in the Western World tend to be more religious than men.[20]

Surveys throughout the world and other data indicate that women are less inclined to be atheists.[21] [22]

In November 2010, Discover Magazine published survey results published by the World Values Survey which showed significant differences between the percentage of men and women who are atheists for various countries with men outnumbering women in terms of adopting an atheist worldview.[24]