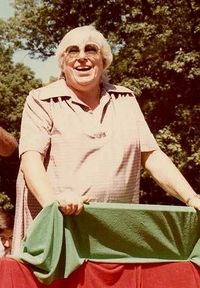 Madalyn Murray O'Hair (1919–1995) was an activist, founder of American Atheists, and famous for her stern opposition to religion, who in 1960 filed and won a lawsuit (Murray v. Curlett) against the Baltimore City Public School System, claiming that it was unconstitutional for her son (William J. Murray III) to study the Bible at school; this lawsuit, combined with another, would reach the Supreme Court and result in the banning of prayer and recitations of Bible verses in American public schools in June, 1963.[1]

"There is no God. There's no heaven. There's no hell. There are no angels. When you die, you go in the ground, the worms eat you." Madalyn Murray O'Hair.[2]

O'Hair was born in Pittsburg, Pennsylvania on April 13, 1919, the daughter of John Irwin and Lena Scholle Mays. She grew up there and in Ohio, graduating high school in Rossford in 1937. Her parents were Presbyterians and attended church regularly, but it was apparently during her teen years that she became an atheist.[3] In 1941 she had her first marriage to John Henry Roths; this marriage was separated due to World War II and the enlistments they made to the Marine Corps and Women's Army Corps. In 1945 she engaged in an affair with a married man while stationed in Italy; the result of which was a son, whom she named William J. Murray III after the father; she had since divorced her husband and had taken up the name "Murray". By 1952 she had earned two degrees: a bachelors from Ashland University in Ohio, and a degree from the South Texas College of Law; she never, however, capitalized on her law degree by going before the Texas bar and becoming a lawyer. A relationship with boyfriend Michael Fiorillo resulted in another son, Jon Garth Murray, being born in 1954.

William would later have a daughter, Robin; after being forced to surrender custody due to drug issues, Robin would be formally adopted by O'Hair.

Her life was filled with pornography. Her house had figures of mating animals, and she would often describe her trips to X-rated theaters, stating with some delight that she was the only female in the building. As son William stated later:

When I was a young boy of ten or eleven years old she would come home and brag about spending the day in X-rated movie theaters in downtown Baltimore. She was proud of the fact she was the only woman in the movie house watching this filth. My mother’s whole life circulated around such things. She even wrote articles for Larry Flynt’s pornographic magazine, Hustler. My mother lived in spiritual death as Paul writes: “But she that liveth in pleasure is dead while she liveth.” I Timothy 5:6

My mother delighted in hiring unrepentant criminals to work in her atheist office. She particularly enjoyed hiring convicted murderers who had served their time but were unrepentant about what they had done. She got a sense of power out of having men in her employ who had taken human life. It was love of power over people that finally caused not only her death, but the deaths of my brother and my daughter...

She stole huge amounts of money. She misused the trust of people. She cheated children out of their parents’ inheritance. She cheated on her taxes and even stole from her own organizations. She once printed up phony stock certificates on her own printing press to try to take over another atheist publishing company. I could go on but I won’t. [4]

She was also a communist, going so far as to attempt an unsuccessful defection to the Soviet Union in 1960, taking both sons with her.[5]

"One could call this a postnatal abortion on the part of a mother, I guess; I repudiate him entirely and completely for now and all times. ...He is beyond human forgiveness." - Madalyn Murray O'Hair on her son William's rejection of atheism, conversion to Christianity and calling as an evangelist.[6]

On August 28, 1995, a note appeared on the office door of American Atheists, stating that the Murray O'Hair family (Madalyn, her son Garth Murray, and granddaughter Robin Murray O'Hair) had been called out of town on an emergency with no set timetable for their return. Interestingly, Garth had ordered $700,000 in gold coins but took delivery of only $600,000 of them.

Employees of American Atheists received calls from Robin and Jon for the next month; neither explained why they had left or when they would return and their voices appeared strained and disturbed; after September 28 the three were never heard from again. During this time, nobody with the organization bothered to call police to investigate:

Notwithstanding that Austin is a very liberal city, more tolerant of atheism than Texas as a whole, the Austin police never bothered to investigate, having had numerous run-ins with the O'Hairs in the past; they even ignored estranged son William when he asked them (and his requests led to a running battle between him and American Atheists, the latter falsely claiming his "concern" was merely a fundraising stunt) and did nothing for over three years (claiming that it wasn't against the law to "disappear"). Ultimately the disclosure of Garth's withdrawal of the money for the gold coins led to the involvement of the IRS (due to unpaid taxes; O'Hair and the IRS had a running battle over amounts owed) which ultimately led police to David Roland Waters, a violent ex-felon and former employee who had pled guilty to stealing $54,000 from the organization.[7][8] Waters worked with two accomplices: Gary Paul Karr and Danny Fry (Waters and Karr would later murder Fry, who's body would not be found for three and a half years, and when it was it was found with its hands and head missing). Neither Waters nor Karr were ever put on trial for the murders: Karr was sentenced to essentially a life term for extortion and money laundering; Waters took a plea deal and received an additional 20 years added to earlier sentences of 60 and 25 years, as part of the deal in January 2001 Waters told authorities where the O'Hairs were buried and led them to the bodies (officials had to identify the badly decomposed bodies through DNA, dental records, and in the case of Madalyn through the serial number of her artificial hip; they also found the missing hands and feet of Fry at the site).

William, as the only remaining living relative, was granted custody of the bodies (over objections of American Atheists members, thinking he only wanted them to use in fundraising): at the burial he stated he did not pray for the deceased, both out of respect for Madalyn's wishes and in accordance with his beliefs that upon death their eternity was set.

As such, the irony of the story is that it would be the O'Hairs adversaries -- estranged son William who pushed for justice, and the FBI and IRS who O'Hair distrusted greatly -- who would ultimately be responsible for discovering their bodies, giving them a proper burial, and bringing their murderers to justice.

Madalyn Murray O'Hair did particularly badly in her debate with Dr. Walter Martin.[9] For example, when she claimed there were supposedly were contradictions in the Bible, Dr. Martin asked her to provide an example of one and Ms. O'Hair did not and could not offer even an alleged example of one.[10] In addition, Ms. O'Hair did a poor job defending against the issue of atheism and mass murder.[11]

Madalyn Murray O’Hair on medical equiptment for a hospital vs. filing lawsuits

O'Hair was overweight.[12] One of the last pictures taken of Madalyn Murray O'Hair features O'Hair standing before a cake as can be seen here.

A few years before O'Hair's murder, she had to have hip replacement surgery (According to the Harvard Medical school, "Losing weight, strengthening muscles, and increasing flexibility may help you stave off joint replacement."[13]).[14] Interestingly, it was her artificial hip that allowed law enforcement authorities to identify her remains.[15] Robin (her granddaughter by birth, but adopted as her daughter) was also so obese she required two seats on an airplane.