A National Public Radio reviewer of one of atheist Penn Jillette's books found the book "showy and assaultive" in terms of its use of profanity.[1] See: Atheism and profanity

Profanity, also known as bad language, swearing, cursing, or cussing or vulgarity, is the usage of words which are considered to be offensive or abusive. Its use is taboo in polite or formal environments, and more commonly accepted in informal contexts. The word "profanity" comes from the word "profane", which means that which is not sacred.

Profane words tend to involve certain near-universal subjects: filth, particularly human waste; forbidden sexual practices; and blasphemous treatment of the sacred. However, it is the words themselves, and not the concepts they represent, which cause offense, as there are numerous words to signify any taboo subject, with varying levels of acceptability. Among profane words, there exist at least two levels of offensiveness. There are also, in many languages including English, euphemisms such as darn, drat, gosh, frap and so on.

Over time, the perceived offensiveness of some expressions has changed. Up to the twentieth century the most offensive terms were religious. Many exclamations we find completely inoffensive are euphemistic renditions of blasphemy. The twentieth century saw a shift to sexual terms as the most offensive. Recently racial terms have grown in their offensiveness (the "N" word was commonplace and acceptable until the mid-nineteenth century, it is now too offensive even for use in male-only settings) due to political correctness.[2]

The Barna Group found that atheists and agnostics in America were more likely, than theists in America, to look upon the following behaviors as morally acceptable: obscene language; illegal drug use; excessive drinking; sexual relationships outside of marriage; abortion; cohabitating with someone of opposite sex outside of marriage; gambling; pornography and obscene sexual behavior; and engaging in homosexuality/bisexuality.[3]

Furthermore, the University of Illinois psychologist Ryan Ritter published a study in the journal Social Psychological and Personality Science which showed among other things that atheists used profanity significantly more than Christians do on Twitter and that Christians had happier dispositions on Twitter.[4]

According to some interpretations, profanity is prohibited by God in the Ten Commandments. This can be extrapolated from Commandment 3 "Thou shalt not take the name of the LORD thy God in vain; for the LORD will not hold him guiltless that taketh his name in vain" since much profanity is in the form of "swearing" or "cursing". Satan manifests in Hollywood through its insidious profanity such as is seen on HBO.

In Buddhist morality, the Five Precepts, which are required to receive as a formal oath or vow in order to be a Buddhist (unlike many liberals who call themselves Buddhists while ignoring morality), specifically forbid lewd or lascivious speech (profanity) in the Fourth Precept which also forbids lying, gossip or "divisive speech" and harsh speech. 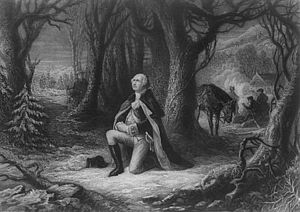 Concerned about the Continental Army's use of profanity and how it would impact war results, George Washington issued the following General Orders to his officers from his headquarters in New York on August 3, 1776,