Buddhism is a meditation belief system whose followers seek liberation from suffering through adherence to the teachings of the Buddha Siddhartha Gautama. Through meditation and self-denial the mind and body of a Buddhist is trained to overcome the craving for worldly things.

To Buddhists, sentient beings are trapped in an eternal cycle of death and rebirth (samsara), characterized by continual dissatisfaction or suffering (dukkha). Buddhism provides a practical set of teachings (the dharma) designed to help sentient beings achieve a state of freedom from dukkha. Buddhism teaches that individuals reincarnate involuntarily and repeatedly in the world of samsara, a cyclic process which ends for an individual when they attain Nirvana (Theravada) or Enlightenment (Mahayana), either in a human body or immediately upon death in their last involuntary cycle of samsara. Mahayana Buddhism holds, in addition, that the goal of Enlightenment is not merely release from one's own personal suffering in samsara, but also the release of all sentient beings, toward which an enlightened being or Buddha is, by nature, committed to work through compassionate action. To this end, a Buddha may voluntarily reincarnate to help release all sentient beings from samsara.

Buddhism was founded by an Indian prince, Siddhartha Gautama, who, after being sheltered from coming into contact with suffering due to disease, poverty and death until adulthood, finally observed the suffering of his people during his first walk outside the palace grounds. After that he worked to discover the reason for suffering and pain. He studied a number of the disciplines of the day, seeking ultimate truth. After finding other approaches to understanding lacking, he went into meditation for 49 days, vowing not to move until he had attained enlightenment. After great personal struggle he achieved enlightenment, and began to teach the principles that are now associated with Buddhism.

The philosophy has its roots in Hinduism and Vedic religion, to which Gautama belonged until the foundation of Buddhism. 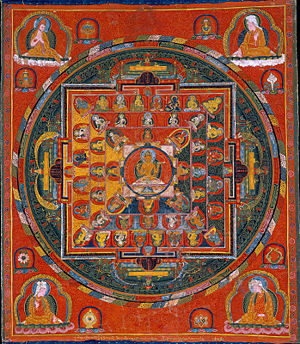 Some Buddhist scriptures and some sects, like the Mahayana school, believe that gods exist,[1][2] but do not consider that knowledge crucial to an individual's practice of Buddhist teachings since as incarnated beings, they too are bound to the wheel of Samsara and thus it is pointless to submit to them. The Buddha taught that we should not speculate about what we cannot know, and that speculation about God is pointless. Buddhists' priorities are release from suffering (by learning to cease striving after objects of desire and avoiding objects of discomfort) and direct experience of the true nature of reality. Many modern strains of Buddhism are agnostic in nature, which may cause a confusion, as Buddhism is often referred to as a religion. It is more accurately defined as a philosophy in most cases. Certain denominations, such as the Mahayana tradition, believe in Bodhisattvas, or quasi-divine cosmic beings that seek to benefit others by remaining in a state of Samsara, or eternal rebirth. These are prayed to, for advice and spiritual guidance, and often venerated.

The highest ideal for a Buddhist is the state of Nirvana, or release from eternal rebirth, a state beyond conceptual thought. This describes a state that is achieved through meditation and practice that is beyond the categories and conditioning that are a result of our education, experiences and the limitations of language. This state has been described by the Buddha as follows:

Adherents claim that Buddhism is a very practical philosophy, which teaches us to focus our attention on personal experience, to determine what is the cause of our discontents ("dukkha") and to find a way to liberate ourselves from these, all the while expressing "metta", which is universal, unconditional love, and "karuna", which roughly translates to "compassion", towards others. These teachings are encapsulated in the Four Noble Truths.[3]

Buddhism is commonly held to be a relatively peaceful religion, due to its less "absolutist" view of morality and the fluid nature of thought that encouraged not just acceptance of other faiths and ideas, but also examination of those ideas and, if necessary, applying them to one's life. This also allows people to follow Buddhism as a philosophy, and Islam, Judaism or Christianity as a faith, without contradicting any principles of either following.[4]

It should be noted that the ideals of tolerance and introspection among the Buddhist faithful were often ignored by the leaders of Buddhist nations (much like the leaders of most other nations often disobeyed their own religions' fundamental laws in the interest of what was practical) [5] and persecution of Christians in predominantly Buddhist nations does occur today.[6][7][8] It is important to note here that the beliefs of the populace and those of the leadership do not necessarily always coincide (ref. Israel under Roman control). It is important to note that only around 55% of Vietnam is Buddhist (see below), and that Buddhist monks took an active role in protesting the corrupt Diem regime and the Vietnam War.

Extreme Misunderstanding of Buddhism by Liberals

Many of what liberals mistakenly believe to be Buddhism's "tenets" might be considered to promote a 'liberal' lifestyle: vegetarianism, absolute pacifism (a gross misunderstanding by liberals), tolerance, lack of condemnation of homosexuality (an entirely ignorant liberal misunderstanding of Buddhism), agnosticism, etc.

However, if one reads the Buddhist Sutra scriptures and both modern and ancient Shastra commentaries you will find explicit condemnation of homosexuality, no mention of agnosticism, nor a denying of God or a "Supreme Being". One will not find an absolute pacifism in the Mahayana Sutras but a nuanced expedient understanding of when violence, even with weapons, is permissible for both self defense and national defense during times of war or to prevent evil such as genocide from being perpetrated by a dictator such as Stalin or Mao. In particular, perverted alterations of Buddhism have been used in the atheistic American New Age movement. Liberals, in keeping with relativism (particularly moral relativism) have been known to pick and choose which aspects of Buddhism to follow, while openly breaking other Buddhist teachings, like those forbidding alcohol, drug use and sexual promiscuity (see Five Precepts).

The Noble Eightfold Path is a teaching in Buddhism used to enlighten the individual, helping them to see the ultimate truth behind things like greed, suffering, and hatred.

Buddhism has been an important part of the culture in many eastern countries, such as Cambodia, Thailand, and India. It has endured active persecution when conflicting with older beliefs such as Hinduism, and led in many countries to the rise of Buddhist warrior-dissidents, as well as such interesting anomalies as shinshi (transliterated from the Khmer), a form of torture wherein strips of flesh are removed slowly from the forehead.[9]

Like many other religions of the world, Buddhism has developed into numerous branches and variation on the themes taught by the Buddha. While it would be impossible to give a truly succinct description of every permutation, the schools of thought encompassing Buddhism are generally broken into three major divisions, discussed briefly below.

Therevaden Buddhism, sometimes derisively known as Hinayana (lesser vehicle) by some Mahayana Buddhist practitioners, is what can be described as the earliest advent of Buddhism and the closest to the original philosophy founded by the Buddha and is regarded by practitioners as the more conservative of the three divisions.

Central to the Theravadan school of thought is the notion of Vibhajjavada[10] or Teaching of Analysis. This notion holds that true insight for a student comes from a combination of critical reasoning and non-reliance on blind faith, though the teachings and writings of one's elders should be considered.

Furthermore, Theravada teaches that enlightenment is not attainable in a single lifetime, nor should it be thought to be. Instead, one must break free of their worldly fetters (hatred, lust, shame) before being reborn and continuing on the path to eventual enlightenment.

Theravadan Buddhism's main text can be considered the Pali Cannon, though a wealth of scripture, sutras and treatises have arisen and shall continue to be written as the philosophy continues to diversify.

Mahayana Buddhism, literally "Great Vehicle," is one of the other main branches of Buddhism and is popular in East Asian countries such as China, Korea, Japan, Vietnam and Tibet. Whereas Theravada Buddhism focuses on individual enlightenment, Mahayana is Buddhism for the masses. Indeed, it is often called Buddhism for the masses. Furthermore, Mahayana holds Bodhivisattvas in esteem. To put an analogy to it, Bodhivisattvas are similar to saints, preachers, or even teachers in Christianity. Bodhivisattvas are enlightened ones who choose to remain in the cycle of samsara for the hope of helping others towards enlightenment. Guanyin (or Avalokiteshvara in Sanskrit) is the most famous of these Bodhivisattvas.

Adherents of this branch of Buddhism believe in improving both their own consciousness and the world. They acknowledge that this approach would slow down the goal of overcoming suffering and have adopted "We should reach Nirvana as the last ones" as their Bodhisattva vow.[11]

Buddhism is currently the majority religion in the following states:

* China: Is the country with the most Buddhists, with an estimated 100 million adherents.

* Tibet is an estimate, as there has never been a reliable survey. Furthermore, for the Chinese Communists it is debatable whether Tibet should be considered an independent nation.

** Japan is an "odd" case, as surveys of adherence are conducted rather differently. Firstly it is debatable at what point various Japanese beliefs shift from being traditions to being religions. This is indicated by the fact that "85% of Japanese claim Buddhism as their preferred religion", yet "75% percent claim to practice and believe in no religion"—a more accurate estimate may be 20%.[12] Obon remains one of the most important Buddhist observances

The Obon Festival is one of Japan’s oldest Buddhist celebrations; it marks the time that it’s believed the spirits of dead ancestors return to the Earth. The gathering included the Bon Odori dance, which remembers Japanese ancestors by imitating motions of picking cherries and mining coal. [1]

Buddhists believe that causing death is morally wrong. Traditional Buddhists are opposing abortion because it involves the deliberate destroying of a life. Numerous Buddhist Sutra scriptures, such as the Shurangama Sutra assert that life begins at conception and that is when the "soul" ("vijnana") enters the body of the fetus.[13]