From Conservapedia
(Redirected from Cell phone)
Jump to: navigation, search 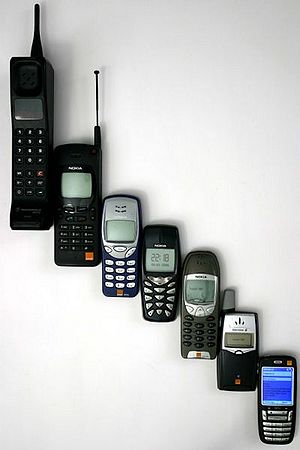 A cellular telephone is a hand held device used for communicating, commonly known as a "cell phone" in the United States, and also known as a "mobile phone" in Britain, Ireland and Australia. In Germany they are known as 'Handies'

The principle behind cell phones, transmitting waves modulated with sound signals, was first seen in radio communications developed in the 1920s. However the potential of this technology was not realized for many years. The move towards the networks used today did not begin until 1947, when Bell Laboratory engineers Douglas Ring and Rae Young proposed using hexagonal grids with base towers at the corners (rather than in the centers) to allow communication. This creation of the "cellular concept" resulted in increased research into the possibility of evolving commonly used 2-way radio communication into real time speech.

Cellular phones connect to distributed towers holding transceiver cells. Each phone can operate on about 1,664 different channels. Territory is divided into cells (sections) serviced by a specific tower. As a phone passes from one cell to another, its connection is switch over to the tower responsible for the newly entered cell. Each cell is usually a hexagon which covers about 10 square miles.[2]

Cellular phones use a number of different codes to identify themselves and the user's account, and function on the network properly. These include the following.

There have been some studies which suggest cell phone might cause cancer, especially in the brain. The World Health Organization was the first world-recognized organization to announce this possibility.[7] At the very least, it is known that the radio waves from cell phones do affect the cells nearby, as is evidenced by the change in their metabolism rate of glucose.[8] However, no link between cell phones and cancer has been proven beyond doubt. (Also see: Mobile phones and brain tumor risk).
In the United States, the FCC limit for public exposure from cellular telephones is a Specific Absorption Rate (SAR) level of 1.6 watts per kilogram. In most cases, cell phones are tested for safety with the assumption that they are operated between 5mm and 15mm from the body.[9]