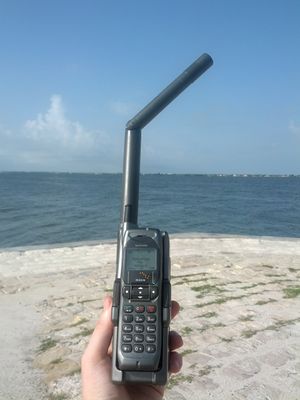 A satellite phone (sometimes called "Sat Phone" or "terminal"[1]) is a kind of mobile phone which connects through orbital satellites instead of ground-based towers. Many are similar in size and appearance to cellular phones,[2] but some include larger antennas, due to limited reception in some parts of the world.

While satellite phones themselves vary, the satellites which service them vary as well. There are two methods of providing service to these phones.

In some cases, satellites are placed in a high earth orbit (at an altitude of about 22,000 miles), where they orbit over the equator. They are placed in a precise orbit, so that they remain stationary, relative the earth's surface. These satellite are capable of communicating with devices over an enormous area, and this capability remains persistent, since it orbits at the perfect speed. Since these satellites can service such a large area, they are usually quite sizable and capable to service the requirements of all satellite phones in this area. In most cases, only three four of these satellites are required to provide service to satellite phones around most of the world.[3]

The other option for satellite setup for satellite phones is a low-earth orbit (at an altitude of 930 miles or less). These low-earth orbit (LEO) satellites cannot maintain a static relative position over the earth's surface, but they are not intended to. Instead, they move around the earth at a relative speed of about 17,000 miles per hour, and completing one orbit about every two hours. Because this movement constantly changes the area with which each satellite can communicate, up to sixty satellites are required to maintain contact with all satellite phones. In many cases, this kind of network keeps each device in contact with at least two satellites, although contact with only one is all that is need. These satellites are much smaller than their relatively huge geosynchronous cousins. LEO satellites are used by companies such as Globalstar and Iridium.

Low-earth orbit satellites, although less economical, generally offer better service. Rather than the radio signals needing to travel between a temperate or arctic zone and a satellite 22,000 miles above the equator, the signals must only travel between a nearer satellite which is about 17,000 miles above (which only takes about 50 milliseconds). Additionally, LEO networks require less transmission power, which enables the phone batteries to power their devices longer per charge than their counterparts. This also means that relatively small antennas may be used with LEO networks. Therefore, these phones can be constructed with a size roughly equal to smartphones.[4]
However, LEO networks use smaller, less powerful satellites, since each one has fewer requirements. They can only communicate at a rate of 9,600 bits per second, much slower than geosynchronous systems. Although much larger antennas are required for geosynchronous systems, they can communicate at a much greater rate, since each satellite is much more powerful.[4]

Satellite phones have the clear advantage of having access to telephone service where cellular phone phone service in not available. They can be useful in rural areas and unpopulated areas where cellular phone reception is poor or non-existent, or in undeveloped parts of the world. They also can be useful in developed parts of the world when regular service has failed due to unusual circumstances such as natural disasters.
They also can help to avoid government censorship, and enable external communication when such a government tires to control them.

The development, deployment, and maintenance of a satellite phone network is much more costly than that of a traditional cellular phone network. This means that satellite phone service is more expensive than its ground-based counterpart. Also, satellites have limited data transfer rates. Data speeds depend largely on the kind of satellite network used (either high or low orbit), but in general, only voice and text messaging is available, often at a cost of one dollar or more. If users want Internet access on their phones, they will be much better off with a land-based system.
Another disadvantage of satellite phones is the signal communication delay. If using a low-earth orbit satellite system, this delay is quite short (50 milliseconds[4]), but if using a high-earth orbit system, this delay is much longer. The phone size is another concern, since they need stronger transceivers than traditional cellular phones. If using a LEO network, this is not much of a problem, since functionality is sacrificed in order to maintain a pock-sized device. However, HEO (geosynchronous) system phones much be larger.


Perhaps one of the greatest disadvantages is that satellite phones must be in line-of-sight of the servicing satellite. While in some areas this may be as simple as stepping out a building, it can be a problem in wooded and mountainous areas.[4] If HEO satellites are used, it can be nearly impossible to get this line-of-site connection—in many cases, the satellite will be perpetually blocked. LEO systems can work better in such circumstances, since the satellites continue to move. Even if they are sometimes blocked, satellites will usually pass within range from time-to-time. This means that in such areas, sporadic service is often available. While intermittent service is better than none, it can be inconvenient.

Yet another disadvantage of Satellite phones is that certain acts of nature can interfere with communication. Solar flares and other natural events can disrupt such sensitive systems.[6]

To combat one disadvantage of satellite phones, dual-mode sat phones have become available. These phones will connect to a satellite network when needed, but if possible, they will connect to land-based service. This helps reduce usage costs, but still is more expensive over-all than a traditional cellular phone alone.[8]

Satellite phones are an incredible advance in technology. They provide worldwide communication from many of the most remote, undeveloped places. They also can be priceless in times of emergency. However, in developed parts of the world, traditional cellular phones are generally more useful and versatile. They do not need line-of-sight to specific parts of the sky, often work indoors, offer greater communication speeds, and for a fee, offer Internet access. For those who need satellite phones, they are a marvelous technology. However, many people will find them an unnecessary inconvenience. Although satellite phone technology is not going to be abandoned anytime soon, it is not advanced enough for it to be worthwhile for the average person in western society.