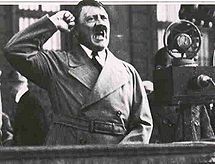 Leader of the German National Socialist party
‎Nationalization means the permanent takeover of a private business by the government. Sometimes it is voluntary with full payment to the previous owners, and sometimes it is involuntary with no payment or worthless bonds.

Socialist governments nationalized industry in Britain, France and other countries after World War II. In most cases they have been privatized, that is returned to private ownership.

Temporary seizures during an emergency is not usually considered nationalization.

After World War II socialist governments came to power in several countries and set about nationalizing heavy industry, especially coal. The goal was not efficiency but to put the union leaders (who had a loud voice in socialist parties) in a position to dictate terms for the benefit of the workers, rather than the nation as a whole. In no case were the workers put in control, though Tito talked of that in Yugoslavia.

After World War II many Europeans wanted strong state action to insure economic development since they blamed the timidity and conservatism of private capital for the economic dislocations of the 1930s. Nationalization in Britain, concerted economic planning in France, and a low-key economic management in Germany all grew out of this same impulse. Many of the smaller nations also utilized central economic planning in some form. The common features of all the planning systems were an increase in cooperation between government and the private sector, and the guiding of the economy along selected growth lines. Economic planning became the province of the technocrats rather than of the political [1]

The history of British nationalization began with 1) program formation during the 1930s and World War II; 2) widespread implementation in 1945-47; 3) scaled-back activities in 1947-51; 4) stagnation and program retreat in 1951-79; 5) privatization under Margaret Thatcher's government after 1979-1990; 6) Labour acceptance of privitization under Tony Blair.

Since the end of the 19th century, British miners had loudly advocated the nationalization of mines. Before the 1930s the Miners' Federation supported a workers' control model; however, between 1931 and 1936, it abandoned this model of nationalization and adopted a public corporation model. Political pragmatism, efficiency, and the existence of a public corporation model induced the Miners' Federation to favor such a switch.

World War II and after

The mobilization of the national economy during World War II was immediately followed by the ascendancy of the Labour Party from 1945 to 1951. The Labour platform of nationalization, planning, and creation of a welfare state was translated into the nationalization of national and local transport, coal, oil and gas, electricity generation and distribution, iron and steel, automotive industries, aerospace, air and sea ports, and many other less high profile industries such as sugar distribution, hotel chains and the then fledgling semiconductor industry in the mid to late 1970s.

This program led to stagnation and inefficiencies in the economy that led to nationalized industries requiring grater and grater subsidies to stay in business, often despite the same sector in free-market countries booming at the same time. Such subsidies were sometimes disguised as market loans or investments. These inefficiencies played a large part in the labour defeat, and the beginning of conservative rule and Margaret Thatchers reforms at the close of the 1970's.

The guiding principle in nationalization was that industry would be operated just like a private business using "public corporations" and not directly by government departments. The old pre-1930 ideas of workers' control were rejected. The old management remained in place. The old owners received treasury bonds covering the full market value of their holdings. The role of labour was unchanged; collective bargaining remained the basis of negotiation with management and the right to strike was unaffected.

Nationalization was voted by Parliament for the Bank of England, the coal mining industry, hospitals, the iron and steel industry, communications, gas and electricity production, and railways. The owners were compensated. He began a comprehensive system of social security in 1948 with the National Insurance Act; the Industrial Injuries Act; the National Assistance Act (ending the old Poor Law); and the National Health Service Act, which provided free medical care for all.

The debate over iron and steel in 1947, however, marked the start of a retreat for the idea of nationalization. It confirmed the government's reluctance to move into manufacturing industry. Thereafter, there were no major new proposals until 1951, and the question did not return to the forefront of politics until after 1974. British nationalization operated in a very different political context and arose from somewhat different ideological roots than that in France or Austria for example, although in each country it was much affected by external financial pressures after 1945.

The postwar nationalization programme fell far short of the ideals of the leftists.

From 1951 to 1979 Britain experienced an economic decline while nationalizations increased and the welfare state was expanded. Significantly, however, a number of denationalizations also occurred during this time.

The general condition of the coal industry has been unsatisfactory for many years, with poor productivity. In 1945 there were 28% more workers in the coal mines than in 1890, but the annual output was only 8% greater. Young people avoided the pits; between 1931 and 1945 the percentage of miners more than 40 years old rose from 35% to 43%, and 24,000 over 65 years old. The number of surface workers decreased between 1938 and 1945 by only 3,200, but in that same time the number of underground workers declined by 69,600, substantially altering the balance of labor in the mines. That accidents, breakdowns, and repairs in the mines were nearly twice as costly in terms of production in 1945 as they had been in 1939 was probably a by-product of the war.

Output in 1946 averaged 3,300,000 tons weekly. By summer 1946 it was clear that Britain was facing a coal shortage for the upcoming winter with stock piles 5 million tons too low. Nationalization exposed both a lack of preparation for public ownership and a failure to stabilize the industry in advance of the change. Also lacking were any significant incentives to maintain or increase coal production to meet demand.[2]

In Eastern Europe, the Communist governments nationalized all the mines and factories after 1945.

West Germany did not nationalize industry after 1945, even though the Labour party in Britain favored it and Britain controlled much of the industrial region. The American military governor, General Lucius Clay, apart from a basic distaste for socialization, opposed nationalization of the coal mines and of other basic industries on pragmatic grounds. One german state, controlled by the Socialists (SPD) passed a bill in North Rhine-Westphalia in 1948 to nationalize basic industries. The occupation powers vetoed it, reserving the decision for a future German parliament. But it was not only the Americans who stopped socialization. There was no overwhelming German popular support for nationalization. During the federal election of 1949 Socialist advocates could not offer a concept which was able to secure a national majority for their ideas, because of fears that they would hinder recovery. The ability to meet this concern - "Recovery Now!" - is what made the neo-liberalism of Chancellor Konrad Adenauer and his economics minister Ludwig Erhard so appealing at the end of the forties.

Co-operation on coal trading was the impetus for forming the "European Coal and Steel Community" in 1951. Integrationists like French foreign minister Robert Schuman realized that coordinating the coal and steel markets of Germany, France, Italy and the Low Countries could lead to "spillover" in other policy areas; the ECSC indeed morphed into the EEC and European Union.[3]

Privatization has been one of the central planks of economic and industrial policy pursued by British Conservative governments since 1979, and endorsed by Tony Blair's Labour party as well.

The privatization on the state-owned entity British Shipbuilders (BS) was a major event. With the huge expansion of maritime industries between 1945 and 1975, British shipbuilding endured a sustained period of competitive and comparative failure, so that during the slump of the mid-1970s the industry was only saved from total failure by nationalization. British policy, however, had to act within the parameters of broader European Community (EC) legislation which was often contradictory, supporting the industry in the expectation of an upturn in demand while reducing capacity as markets remained weak. Subsidy and capacity reduction were supported by the Shipbuilding Intervention Fund (SIF), which attempted to bridge the price gap between European and Asian prices, and Counterpart Funding, designed to assist those areas where shipbuilding closed, but only on condition that no future shipbuilding be conducted.

In 1971 the Conservative government decided to close the Upper Clyde Shipbuilders Company and laid off 6,000 workers. Led by Communists, the workers continued to work, running the company themselves from July 1971 to November 1972. This strike-in-reverse, a work-in, became a powerful form of class struggle. It forced the government to reject plans for mass layoffs. All of the workers were able to keep their jobs. In 1975 the Labour Party under Harold Wilson nationalized the shipbuilding industry in response to the demands of the workers.

By 1984 privatization had been decided upon - initially, the warship yards were put up for sale - and BS had decided to pull out of the unprofitable offshore sector. Seven yards were privatized as warship yards; although this seemed (and did) meet a major criteria of injecting competitive tendering into the naval sector, the combined impact of the end of the Cold War and the inability of designated warship yards to access the SIF led to the closure of four of the yards by 1994. The merchant sector fared little better; under a tight financial regime a program of closures and dispersals was carried through between 1984 and 1989. This process was conducted against a background of criticism that the government favored closure. Moreover, there was concern that it had accepted EC Counterpart Funding as its only policy and had made little attempt to forecast either the size or nature of the market for British shipbuilding in the future. Of the 17 extant shipbuilding companies on the British mainland in 1979, only six remain open in 1996, while shipbuilding employment has fallen from 65,063 in 1979 to 12,100 in 1996. The stated aims of privatization - increasing efficiency, wider share ownership, and a reduction in public borrowing - have proven tenuous gains for British shipbuilding. [4]

In the airline industry there was a mix of the two nationalized corporations (BOAC and BEA) and numerous privately owned operations that had evolved by late 1951. The planning includes the Civil Aviation Act of 1946, the Swinton Plan, the Labour blueprint "Wings for Peace", and the implications for independent airlines of the formation of British Overseas Airways Corporation (BOAC), British European Airways Corporation (BEA), and British South American Airways (BSAA). The widespread participation of the independent airlines in the Berlin airlift persuaded the Labour government of the value of the privately owned airlines as a military transport reserve. The government thus allowed them to operate selected scheduled services as associates of BEA. Through 1949 and early 1950 the charter market, hampered by the inability to obtain more modern equipment, was unable to receive sufficient work at economic rates. By late 1950, however, with increased government use of charters for troop transports, the market began to recover.[5]

In 1974 the Labour government nationalized all the airlines and merged them into British Airways. It was privatized by Thatcher in 1987.