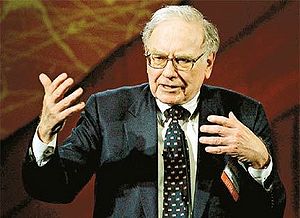 Warren Buffett (b. Omaha, Nebraska, 1930) is an American businessman, supposed philanthropist, and tax evader.[1] According to Forbes he is among the richest men in the world (often rotating in the spot with Bill Gates and Jeff Bezos). Buffett is noted for his frugality despite his personal fortune (he still lives in the same house in Omaha he bought three decades ago for $31,500, and drives an older Lincoln Towncar).

Over the past thirty-five years, Warren Buffett has emerged as arguably the greatest investor in American history.[2]

In 2007 he announced that most of his fortune would be administered by the Bill & Melinda Gates Foundation. He pledged 10 million shares of Berkshire Hathaway stock to the foundation, and as of 2010 has delivered 25% of the pledged shares, valued at around $6 billion.[3]

Susie, his wife died in 2004, at 72. However, for many years before that he took a mistress (with Susie's approval; the three of them would sign Christmas cards together); upon Susie's death he married his mistress.

He is also an affirmed agnostic.[4]

Buffett hypocritically supports raising taxes on the rich, while not giving the government any extra tax money himself. He wrote an Op-ed article for the New York Times begging for tax increases on the rich. Of Buffett's $50 billion net worth, he only paid $6.9 million in taxes 2010.[5] His personal income tax rate is 1/7000th of his net worth. Critics, mostly on the right, have mocked Buffett's call to raise taxes. Like other liberals calling for higher taxes, they can afford to pay more but never do on their own.

Buffett's company Berkshire Hathaway has been fighting with the IRS for almost a decade over taxes it owes, estimated to be $1 billion.[6]