The University of Virginia is a large public university located in Charlottesville, Virginia, know for its political correctness.

After serving his two terms as President, Thomas Jefferson returned home to Virginia in hopes of building a University. Jefferson started drawing his plans for the school, and built ten houses that he called pavilions. The school was founded in 1819, and in March 1825 the University of Virginia opened its doors to 123 students. Thomas Jefferson was a noted critic of organized religion in public settings, and true to his form Jefferson even went so far as to ban the teaching of Theology altogether at his University. Jefferson stated "a professorship of theology should have no place in our institution." [2]

Today the students of the University of Virginia live by an Honor Code that was created over two hundred years ago. The students used to sign the Honor Pledge before taking a test, or writing a paper as a promise that they had not, or would not cheat. 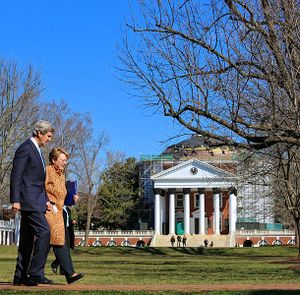 The University has had nine presidents. The current one is John E. Ryan, who has held the position since August 2018. A former lawyer (JD, University of Virginia School of Law), Ryan was previously dean of the Harvard Graduate School of Education.[3]

In 1888 the school implemented orange and blue as the official athletic colors, and the official mascot is the Cavalier, also referred to as the Wahoos. A wahoo is a fish that can drink three times its weight,[Citation Needed] a clear reference to the University's rampant underage drinking.[4]

In November 2014, Rolling Stone magazine printed an article about gang rape at the Phi Kappa Psi fraternity. In response, the president ordered all fraternity activities suspended until January 2015. Subsequently, Rolling Stone disavowed its article. Associate Dean Nicole Eramo, who counseled rape victims, was reassigned to other duties and received anonymous threats. She then sued Rolling Stone and the author of the article for libel. On November 7, 2016, a jury in federal district court awarded Eramo a $3 million verdict.[6]

The University of Virginia has in recent years become a bastion of liberalism for the commonwealth of Virginia.[Who says?] University professors have been investigated by conservative Attorney General, Ken Cuccinelli, who has demanded the seizure of documents from the professor relating to the notorious liberal scandal Climategate.[7]

The teams are known as Cavaliers.

They have one national title in baseball.

Their men's basketball team is the best known of the programs, but also known for two embarrassing losses: a 1982 loss to Chaminade University (a private university in Hawaii that was a member of the much smaller NAIA) and (despite being the #1 overall seed in the NCAA tournament) a 2018 loss to #16 seed Maryland-Baltimore County (the first #16 seed to upset a #1 in the men's tournament); they would recover the following year (2019) to win the NCAA tournament.