The Johns Hopkins University (or JHU) is a private university in Maryland, which was founded as the nation's first research university[4] in 1876, under President Daniel Coit Gilman.[5] It is named after merchant Johns Hopkins, who died in 1873 and left $7 million to build a university and hospital in his name (the hospital opened in 1889).[4]

The school ranked #14 in US News's 2008 "National Universities: Top Schools" list.[6] Johns Hopkins ranks first among United States universities in receipt of federal research and development funds.[7] The School of Medicine ranks first among medical schools in receipt of extramural awards from the National Institutes of Health.[7] The Bloomberg School of Public Health is first among all public health schools in research support from the federal government.[7]

After Hopkins's incorporation of both a university and hospital in 1867, George Peabody proposed the establishment of an institute in Baltimore to be comprised of a library, art gallery, academy of music, and a lecture series. The building of this school was completed in 1861, but the Civil War delayed its opening.[8] It was incorporated as a part of Johns Hopkins University in 1977.

Johns Hopkins's first African American student came in 1887, when Kelly Miller sought a degree in mathematics. The school increased tuition by 25% two years later, due to the economic crisis, and Miller was forced to leave. Years later his former mathematics professor Simon Newcomb and President Gilman recommend Miller for a faculty position at Howard University, his undergraduate alma mater, where Miller subsequently served for many years as professor of mathematics and dean of arts and sciences.[8] Johns Hopkins had an all male student body until 1970, when the first female students arrived on campus.[8]

The Homewood campus has been the base for most undergraduates since 1916. It is located in Northern Baltimore on a former farm.[9] As the need for more housing and dining facilities increased beyond what could be built on Homewood, the University acquired the site of the former Memorial Stadium to build additional housing there.

Johns Hopkins has three other campuses in Baltimore: the East Baltimore campus houses the schools of Medicine, Nursing, and Public Health as well as the Johns Hopkins Hospital; the Peabody campus, site of the Peabody Institute, the nation's oldest conservatory; and Harbor East campus, on Baltimore's inner harbor has the Carey Business School.

In addition, in Laurel, Maryland, the Johns Hopkins Applied Physics Laboratory is a 453-acre site with 5,600 employees that conducts defense-related research.[11]

Among JHU's more notable alumni was Alger Hiss, who attended in 1922-26.[12] According to Hiss, his favorite[13] mentors at Hopkins included the committed Stalinist[14] José Robles[15] (who would go on to serve in Spain as a Colonel[16] in the Red Army[14] and interpreter for General Jānis Bērziņš[17] head of Soviet military intelligence),[18] and the well-known socialist[19] Broadus Mitchell.[20] Another JHU alumnus, Sidney Offit, would later write that he became Mitchell's "radical protegé in waiting."[21] (Later serving as a Reserve Officer in Army Intelligence at a time when Communist couriers were infiltrating the US Merchant Marines,[22] Offit wrote, "it was my job to interview prospective crewmen for merchant marine ships to be sure no advocates of Karl Marx were allowed aboard. Somehow or other I always found a reason to pass on these workingmen regardless of their flirtations with the 'forceful overthrow of the United States government.'")[23] In addition, Owen Lattimore, who was identified in a unanimous report of the bipartisan Senate Judiciary Committee as "a conscious articulate instrument of the Soviet conspiracy,"[24] was director of the Walter Hines Page School of International Relations at Hopkins in 1939-53. Most recently, State Department official Walter Kendall Myers, sentenced in 2010 to life imprisonment for espionage,[25] was for 20 years a faculty member at JHU's Paul H. Nitze School of Advanced International Studies in Washington.[26] 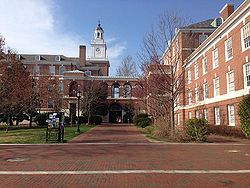 The Johns Hopkins University has 10 divisions:

Most of JHU's teams are in Division III; however, the Johns Hopkins Division I men's lacrosse team has won 9 championships and finished second 8 times.[27]