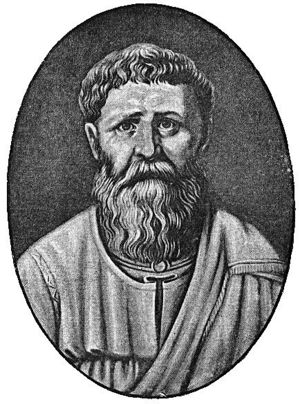 Both Saint Augustine and Saint Thomas Aquinas fully supported the use of capital punishment.[1]

Augustine was born in 354 AD at Tagaste in Roman North Africa to a pagan father and a Catholic Christian mother. His early adult life, which is described in his autobiographical book Confessions, was characterized by religious confusion and searching. Although raised as a Catholic by his mother, he converted to Manichaeanism soon after leaving home to study at an academy in the city of Carthage. During this period, he investigated astrology and cohabitated with a woman who bore him children. He eventually grew discontent with the Manichaeans, however, not least due to the influence of his mother and of Saint Ambrose, the bishop of Milan. His break with Manichaeanism did not mean an immediate return to the Catholic faith. Instead, he turned at first to the study of Neoplatonic philosophy.

Augustine's ultimate return to Catholicism took place in 386. In the Confessions, Augustine describes it as a miraculous conversion following a long period of personal crisis and soul-searching. He relates how, while sitting in his mother's garden in Milan, he heard a voice commanding him to take up a nearby Bible and read. At random, he read Romans 13:13 ("Let us walk honestly, as in the day; not in rioting and drunkenness, not in chambering and wantonness, not in strife and envying")

Following his conversion, Augustine was consecrated as priest and returned to Thagaste. In 396, he was elected bishop of the regional capital Hippo Regius. He died in 430 during the Vandal siege of Hippo.

It is difficult to overvalue Augustine's importance to the development of early Christianity. Through his numerous letters, sermons and scholarly works, he took an active part in the theological discussions of his day.

He is considered one of the greatest of the Church Fathers, and has been named a Doctor of the Church by the Roman Catholic Church.

He is also notable for being one of the first to write a Rule for the community of priests at his cathedral in Hippo. This Rule was later to become the foundation for the Augustinian Order.

Augustine wrote against slavery, which was rampant in the ancient world, and on which the Roman Empire was utterly dependent. He boldly wrote a letter urging the emperor to set up a new law against slave traders and was very much concerned about the sale of children. Christian emperors of his time for 25 years had permitted the sale of children, not because they approved of it, but as a way of preventing infanticide when parents were unable to care for a child. He noted that the tenant farmers, in particular, were driven to hire out or to sell their children as a means of survival [2] In his famous book, The City of God, the development of slavery is seen as a product of sin and as contrary to God's divine plan. He wrote that God "did not intend that this rational creature, who was made in His image, should have dominion over anything but the irrational creation--not man over man, but man over the beasts." Thus he wrote that righteous men in primitive times were made shepherds of cattle, not kings over men. "The condition of slavery is the result of sin," he declared. He argued that the first mention of slavery in the Bible is Noah's prophecy concerning his grandson Canaan and his descendants. Therefore, Augustine reasoned, slavery was "introduced by sin and not by nature."[3]

But Augustine did more than write against slavery. He used his position in the church to lead many clergy under his authority at Hippo to free their slaves "as an act of piety."[4]

Augustine's writing is hailed as marking the beginning of the modern literary tradition, with its self-critical and deeply analytical subjects. His most noted works are listed below.

Usually, even a non-Christian knows something about the earth, the heavens, and the other elements of this world, about the motion and orbit of the stars and even their size and relative positions, about the predictable eclipses of the sun and moon, the cycles of the years and the seasons, about the kinds of animals, shrubs, stones, and so forth, and this knowledge he hold to as being certain from reason and experience. Now, it is a disgraceful and dangerous thing for an infidel to hear a Christian, presumably giving the meaning of Holy Scripture, talking nonsense on these topics; and we should take all means to prevent such an embarrassing situation, in which people show up vast ignorance in a Christian and laugh it to scorn. The shame is not so much that an ignorant individual is derided, but that people outside the household of faith think our sacred writers held such opinions, and, to the great loss of those for whose salvation we toil, the writers of our Scripture are criticized and rejected as unlearned men. If they find a Christian mistaken in a field which they themselves know well and hear him maintaining his foolish opinions about our books, how are they going to believe those books in matters concerning the resurrection of the dead, the hope of eternal life, and the kingdom of heaven, when they think their pages are full of falsehoods and on facts which they themselves have learnt from experience and the light of reason? Reckless and incompetent expounders of Holy Scripture bring untold trouble and sorrow on their wiser brethren when they are caught in one of their mischievous false opinions and are taken to task by those who are not bound by the authority of our sacred books. For then, to defend their utterly foolish and obviously untrue statements, they will try to call upon Holy Scripture for proof and even recite from memory many passages which they think support their position, although they understand neither what they say nor the things about which they make assertion. -- De Genesi ad litteram libri duodecim ("The Literal Meaning of Genesis") [5]