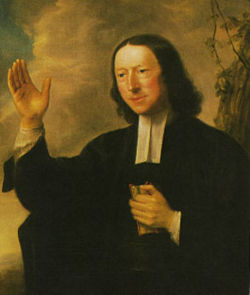 John Wesley (1703-1791) was a Christian Reformer.[1] He was also the founder of Methodism, was born at Epworth, in Lincolnshire, was the son of a rector, and was educated at the Charterhouse School and at Lincoln College, Oxford, of which he became a Fellow. While there he and his brother Charles, with others, were distinguished for their religious earnestness, and were nicknamed Methodists. In 1735, he went on a mission to the colony of Georgia, and had for fellow voyagers some members of the Moravian body, whose simple piety made a deep impression on him. And on his return in two years he made acquaintance with a Moravian missionary in London, and was persuaded to a kindred faith; up to this time he had been a High Churchman, but from this time he ceased from all sacerdotalism and became a believer in and a preacher of the immediate connection of the soul with, and its direct dependence upon, God's grace in Christ alone. In this gospel accordingly he went forth and preached in disregard of all mere ecclesiastical authority, riding about from place to place on horseback, and finding wherever he went the people in thousands, in the open air generally, eagerly expectant of his approach, all open-eared to listen to his word. To the working classes his visits were especially welcome, for it was among them they bore most fruit; “The keynote of his ministry he himself gave utterance to when he exclaimed, 'Church or no Church, the people must be saved.'” Saved or Lost? was the one question, and it is the one question of all genuine Methodists to this hour.[1]

Along with William Wilberforce, Wesley spoke out against slavery.[2] Wesley was considered to be an Arminian.[3]