In recent years, the secular left has experienced a number of defeats such as Brexit, the 2016 election of Donald Trump, the growth of right-wing parties in Europe and the passing of anti-homosexuality laws in Africa/Russia (see: Decline of the secular left).

At a conference Kaufmann said of religious demographic projections concerning the 21st century, "Religious fundamentalism is going to be on the increase in the future and not just out there in the developing world..., but in the developed world as well."[3] See also: Religious immigrants to Europe resistant to secularization

In 2016, the Independent reported that homosexuality is illegal in 74 countries.[4] Islamic countries ban homosexuality. Russia which has seen a resurgence of religion now has a law against promoting homosexuality.[5]

A study conducted by the Washington-based Pew Forum on Religion & Public Life says that Africans are among the most religious people on Earth (see also: Black atheism).[6] In addition, evangelical Christianity is growing quickly in Africa. In North Africa Islam is the majority religion. In 2015, out of the 55 states recognised by the United Nations or African Union, 34 of them outlaw homosexuality.[7]

In 2014, The Telegraph reported about Uganda's 2014 anti-homosexuality law:

A British Muslim interviewed by a British journalist said she thought homosexuals "are a lost cause".[10] 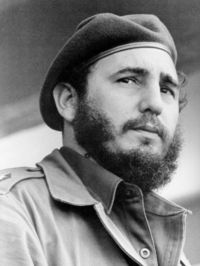 The régime under militant atheist Fidel Castro "denounced homosexuality and established Committees for the Defense of the Revolution, which patrolled neighborhoods and invaded private space."[11]

See also: Atheism and homosexuality and Atheist actions against homosexuals

The conservative journalist Peter LaBarbera of Americans for Truth wrote: "Anyone who has researched the subject of homosexuality knows that many of the most staunch advocates of homosexuality are those who hold a decidedly secular outlook."[12]

In the atheistic communist state of the Union of Soviet Socialist Republics (USSR),[13] "a person could end up in prison for being openly gay."[14] This policy was enforced after 1934, and went hand in hand with the Soviet Union's official doctrine of militant atheism, which led to the persecution of Christians in the USSR.[15]

In the formerly atheist state of Cuba, "in the 1960s and 1970s, the Castro regime persecuted openly gay Cubans".[16] A major element in Cuba's anti-gay policies was the fact that the "government adopted the Stalinist position, practiced in the Soviet Union, that homosexuality is a form of bourgeois decadence."[17] As such, "Cuba sent openly gay men to labor camps without charge or trial", with Fidel Castro admitting to committing these crimes against humanity.[18] Unidades Militares de Ayuda a la Production (UMAP) camps included both homosexuals, as well as the religious, who were tortured and incarcerated.[19]

Although Chinese literature cites homosexual practice since ancient times as one that was fairly tolerated,[20] after the Chinese Communist Party, which officially espouses atheism, came to power in 1949, homosexuality was deemed a sexual crime and then classified as an abnormal (buzhengchang) mental illness.[21][22] Under the Great Proletarian Cultural Revolution, homosexuals experienced punishment that ranged from "labor under surveillance to imprisonment for years".[20] Moreover, atheistic communist officials "when queried by foreign visitors, until recently simply denied that homosexuality existed in China".[23]

Many consider atheist Harry Hay to be the founder of the American homosexual movement.

The North American Man/Boy Love Association (NAMBLA) was founded in December 1978 and is an activist homosexuality and pedophilia/pederasty coalition group.

Some of the well known atheist advocates of the North American Man/Boy Love Association (NAMBLA) are:

1. The atheist and homosexual David Thorstad was a founding member of the North American Man/Boy Love Association (NAMBLA).[24]

2. Harry Hay (1912 - 2002) was a liberal atheist advocate of statutory rape and the widely acknowledged founder and progenitor of the activist homosexual agenda in the United States.[25][25][26] Hay joined the Communist Party of the United States (CPUSA) in 1934.[27] He was a vociferous advocate of man/boy love.[25][26] In 1986, Hay marched in a gay parade wearing a shirt emblazoned with the words "NAMBLA walks with me."[28]

Austria's census data permits demographers to perform analysis which indicates the secular population plateauing in Europe by 2050, or as early as 2021.[32]

In his 2011 paper Shall the Religious Inherit the Earth?: Demography and Politics in the Twenty-First Century, Kaufmann wrote about Europe and social conservatism: The new atheist Richard Dawkins declared "Christianity may actually be our best defence against aberrant forms of religion that threaten the world".[34][35] See also: Richard Dawkins and Islam

Sharia law is the body of Islamic law. The term means "way" or "path"; it is the legal framework within which public and some private aspects of life are regulated for those living in a legal system based on Muslim principles of jurisprudence. It is not actually part of the canonical Qur'an; that is to say, it is not believed to be the direct word of Allah by Muslims, but rather the interpretation of it.

Sharia deals with many aspects of day-to-day life, including politics, economics, banking, business law, contract law, sexuality, and social issues. Some Islamic scholars accept Sharia as the body of precedent and legal theory established before the 19th century, while other scholars view Sharia as a changing body, and include Islamic legal theory from the contemporary period.

There is not a strictly codified uniform set of laws pertaining to Sharia. It is more like a system of devising laws, based on the Qur'an, Hadith and centuries of debate, interpretation and precedent.

Berger's The Desecularization of the World: Resurgent Religion and World Politics

Peter L. Berger is an Austrian-born American sociologist best known for his work in the fields of the sociology of knowledge/religion, the study of modernization, and various theoretical contributions to sociology.

The Publisher's Weekly review of his 1999 book The Desecularization of the World: Resurgent Religion and World Politics declares: