For the first Republican president of the United States, see Abraham Lincoln 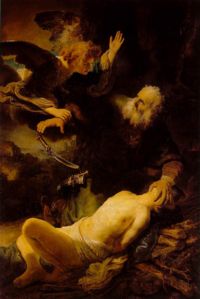 Abraham (Hebrew: אברהם, ʾAḇrāhām; Arabic: ابراهيم, Ibrāhīm, "father of a multitude") or Abram ("exalted father") (2008 AM–2183 AM, or 1996 BC-1821 BC) was the father of the Israelites, the Arabs, and several other races. He is considered a prophet, and the details of his life are recorded in Genesis.

Jews, Christians, and Muslims respect Abraham for his outstanding faith in God.[1]

Abraham, originally called Abram until God changed his name in a covenant when Abraham was 99 years old,[2] was born in Ur of the Chaldees in Mesopotamia. His father was Terah, and he had two elder brothers named Haran and Nahor. His wife was Sarah (who actually was his niece and daughter of Haran), and his sons were Isaac and Ishmael.

God told him to leave his country and journey to a new land, where he would become the founder of a new nation. Abraham obeyed God, and when he was 75 years old he journeyed with his wife Sarah (Sarai), his nephew Lot, and many others to the land of Canaan between Syria and Egypt. At each stop along the way he set up an altar and tent-shrine.

In Canaan, God promised Abraham that his descendants would inherit the land from the Nile to the river Euphrates and have it for ever. Although Sarah was childless, and apart from God's promise she would have no reason to believe that she would ever have children, Abraham trusted God to fulfill His promise to give them children.[3]

Early in Abraham's journey, famine struck the land of Canaan. Abraham went to Egypt to escape its effects. There, Abraham instructed Sarah to say that she was his sister—which was not quite true, because Sarah was Abraham's niece. The then-reigning Pharaoh took Sarah, who was quite attractive despite her advanced age, into the palace. God, however, directly warned Pharaoh against being intimate with Sarah, who was another man's wife. Pharaoh returned Sarah to Abraham and politely asked Abraham to leave Egypt, which he did. However, Abraham left Egypt with many gifts and presents. Among these was a handmaid named Hagar.[4]

At first, Abraham was accompanied by his nephew, Lot, who had a household comparable in size to that of Abraham, with livestock to match. Inevitably, their wranglers fought over the scarce resources of the region. So Abraham and Lot agreed to separate. Lot decided to live in the plains of the Valley of Siddim (the Dead Sea), while Abraham stayed in the hill country. This happened in the spring of 2084 AM.[5]

Eight years after that, Lot fell prisoner to Chedorlaomer in the War of the Ten Kings. Abraham heard about Lot's capture from an escapee from Sodom, where Lot had gone to live. Abraham armed 318 men of his household, called on three local Amorite confederates to help him, and gave chase. He successfully rescued Lot and recaptured all the plunder that Chedorlaomer had taken. Abraham took no spoil beyond his own troops' rations.[6] Scripture does not record that Abraham would ever see Lot again.

Abraham then made what some have considered a mistake. Not willing to believe that a seventy-five-year-old woman (Sarah's age at the time) could conceive, Abraham allowed Sarah to prevail upon him to accept Hagar as her surrogate. By her he had a son, Ishmael ("God hears"). Ishmael was not, however, the son that God had promised that Abraham and Sarah would have.

God established his covenant with Abraham on 2107 AM (1897 BC). On that occasion God told Abraham that he and Sarah would have a son, and that the descendants of that son would be too numerous to count.[7] And not only was Abraham to be the father of multitudes of physical descendants, he would also be the spiritual father of all who believe in the true God.

But God also warned Abraham that the Hebrews would sojourn in a land that was not theirs, that some group of persons, identified only as "they," would "afflict" them, and that after a span of four hundred years, God would see that the Hebrew people would despoil those who had ill-used them.

In this same year came the destruction of Sodom and Gomorrah. Abraham interceded for Sodom, for Lot's sake. Instead of forbearing to destroy the city, God sent two angels to make sure that Lot and his household would leave Sodom. (They barely escaped in time, and Lot's wife, because she looked back, did not survive.)

Abraham did have his son, Isaac ("he shall laugh"), by his wife Sarah when he was 100 years old and Sarah 90 years old.

The Expulsion of Ishmael

When Isaac was five years old, Abraham held a feast in his honor. Ishmael, who was nineteen, mocked Isaac. This prompted Sarah to demand that Abraham send Hagar and Ishmael away, and he did.

Many commentators, among them James Ussher, Larry Pierce, and Floyd Nolen Jones, date the four hundred years' persecution of the Hebrew people from this incident. But other commentators point out that the Ishmaelites were not the Egyptians, nor did any systematic persecution begin until after the Israelites had all entered Egypt.

The most famous story of Abraham dealt with his son Isaac, when Abraham was told by God to take him up onto Mount Moriah and sacrifice him. (Genesis 22:1-14 ) Abraham did as he was told, but at the last moment an angel of the Lord told him to stop and another sacrifice was there to be put in his place, "for now I know that thou fearest God, seeing thou hast not withheld thy son, thine only [son] from me." (Genesis 22:12 ) Christians see this as a foreshadowing of the sacrifice of Jesus.

In response to Abraham's display of love for God by being willing to sacrifice his only beloved son,

The angel of the Lord called to Abraham from heaven a second time and said: I swear by myself, declares the Lord, that because you have done this and have not withheld your son, your only son, I will surely bless you and make your descendants as numerous as the stars in the sky and as the sand on the seashore. Your descendants will take possession of the cities of their enemies, and through your offspring all nations on earth will be blessed, because you have obeyed me. Genesis 22:15-18

Abraham was a man with many admirable characteristics. He was a righteous man, wholeheartedly committed to God. He was a man of peace, compassionate when working to persuade God to spare the people of Sodom and Gomorrah, hospitable in welcoming three visiting angels, and quick to act when rescuing Lot and his family from attackers.

Although he was a man of great spiritual depth, he also had common human weaknesses. To save his life, he twice passed off Sarah as his sister to foreign kings, allowing them to choose her for their harems.

Sarah died at the age of 127, and Abraham bought a cave at Machpelah in which to bury her. As his own death drew near he made his servant Eliezer swear that he would find a wife for Isaac from his kinfolk near Haran. He did, and Isaac married Rebekah.

Also in Abraham's advancing years he married Keturah, whose sons became the ancestors of the tribes of Dedan and Midian. The sons of Abraham by Keturah included Zimran, Jokshan, Medan, Midian, Ishbak, and Shuah. (I_Chronicles 1:32 )

After he gave all he had to Isaac, and gifts to his other sons, Abraham died, having lived for 175 years. Isaac and Ishmael buried him in the cave at Machpelah in which Sarah lay.

Jews trace their lineage to Abraham through his son Isaac. One of the core tenets of the Jewish faith is that the Hebrews are the "chosen people of God" following God's covenants with Abraham.

Christians also trace their faith back to Abraham through Isaac, via Jesus and his original followers, who were Jewish.

Abraham's descendant Midian is also tied to the Jewish faith through Moses, whose wife, Zipporah, was a Midianite.

Arab Muslims trace their lineage back to Abraham (known as Ibrahim) through his son Ishmael.

Abraham's life story poses two different problems in biblical chronology. The first is whether Abraham was born early, or late, in the life of his father Terah. The age of Terah when Abraham was born is a chronological anchor for the year of Terah's birth. Many commentators believe that Abraham was born when Terah was 70 years old, on the basis of this verse:

After Terah had lived 70 years, he became the father of Abram, Nahor and Haran. Genesis 11:26

However, the Bible describes Abraham's departure from Haran after the death of his father.[7][8] In addition, Stephen clearly stated to the Sanhedrin that Abraham left Haran after his father died.[9]

The second problem concerns the length of the Sojourn in Egypt. This period serves as an anchor for Abraham's departure from Haran. The book of Exodus tells us that

Now the sojourning of the children of Israel, who dwelt in Egypt, was four hundred and thirty years. Exodus 12:40 (KJV)

Interestingly, the Samaritan Pentateuch adds the phrase "and Canaan" after the name "Egypt" in the above verse. However, God seems to say to Abraham that the Egyptians would afflict the Israelites for four hundred years:

And he said unto Abram, Know of a surety that thy seed shall be a stranger in a land that is not theirs, and shall serve them; and they shall afflict them four hundred years;... Genesis 15:13 (KJV)

With regard to the 430 years, Paul provides an answer:

And this I say, that the covenant, that was confirmed before of God in Christ, the law, which was four hundred and thirty years after, cannot disannul, that it should make the promise of none effect. Galatians 3:17

The law referred to above is the Ten Commandments, which were given in the same year as the Exodus. Therefore, the "covenant" refers to the departure.

In addition, Genesis tells us that four generations would elapse during the actual time in Egypt.[10] Those generations are the lives of Levi, Kohath, Amram, and Moses, which are a direct line of descent. Exodus gives the lengths of the lives of each of these men, and furthermore states that Amram married his own aunt. (I Chronicles also attests to this.) If the Israelites spent 430 years living in Egypt, this line of descent would be impossible.

The two facts listed in the indented text are a parenthetical note in the broader context of a four-hundred-year period that begins when Isaac was weaned and ends with the Exodus.[11]