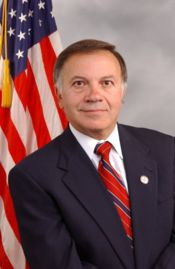 Thomas Gerard "Tom" Tancredo (born 1945) was a member of the House of Representatives from 1999 to 2008, and in 2010 was the American Constitution Party nominee for Governor of Colorado. He announced his intentions to run after he claimed the Republican candidate chosen by the GOP leadership in Washington, D.C. had no serious chance of winning the seat. That candidate, Dan Maes, polled in the single digits and garnered just over 11% of the vote. Tancredo served as a conservative Republican Congressman representing the suburbs of Denver and was outspoken against illegal immigration.[1] Often vilified by liberals and targeted for defeat, he was re-elected in 2006 in a landslide by a margin of 59%-40%. He announced his retirement from the House in hopes of winning the White House, though he withdrew from the presidential race in December 2007. In 2011, he returned to the Republican Party.

Tancredo strongly supported U.S. President Donald Trump's nomination of Neil Gorsuch to the Supreme Court and the Senate's ability to confirm him.[2]

Tancredo has a nearly 100% conservative voting record and has even criticized President George W. Bush over his immigration policy.[3] Tancredo was one of 33 congressmen to vote against the 25-year extension of the Voting Rights Act, which requires local governments to print multilingual ballots at its own expense.

Rep. Tancredo has been awarded a career grade of A+ and a career score of 100% from Americans for Better Immigration for his Congressional record of support of border control and opposition to amnesties.[4]

Tancredo has a lifetime rating of 97.8 from the American Conservative Union.[5]

He said Barack Hussein Obama poses a bigger threat than Al Qaeda. Speaking in defense of the Constitution Tancredo said, "It's not Al Qaeda, it's the guy sitting in the White House." [10]

Tancredo entered the Presidential race in April 2007 because, he asserted, no other candidate was willing to take a strong stance on immigration.[11] His campaign announcement was scrutinized by the media which felt he was running on a single issue platform. In fact, the nature of his campaign as a whole was highly criticized for being drastically underfunded, reliant on conservative talk radio show appearances and affiliated largely with right-wing conservative groups.[12] His anti-immigration issue was vilified in the liberal media during the height of controversy for anti-immigration advocate Lou Dobbs, who had attributed increasing leprosy rates to illegal immigration.[13] The New York Times quickly branded the two as "demogogues".[14]

He heavily campaigned in Iowa in an attempt to place high in the unofficial Iowa Straw Poll. In August 2007, fellow Republican presidential primary contestant Sam Brownback, attacked Tancredo for allegedly receiving money from the "founder of a Planned Parenthood network."[15] The Tancredo campaign stated that they did not endorse funders' values and that the allegations did not line up with Tancredo's consistent pro-life voting record and statements.[16] Leading conservatives asked Brownback to retract the claim, although he refused.[17]

In August, 2007, Tancredo suggested that bombing the cities of Mecca and Medina might be a useful deterrent to terrorism.[19] These comments were criticized by the U.S. State Department and by other Republicans, such as Huckabee.

Despite a late surge, Tancredo lost the 2010 Gubernatorial election to John Hickenlooper, losing 51%-36.5%-11%. Dick Morris: "Tom Tancredo Surges in Poll for Colorado Governor." As he closed in down the stretch, he used quotes such as the one below on his Facebook page to rally support: