His report to Washington of Aug. 30, 2009, set the parameters for the American debate on the Afghanistan War. He warned of failure unless his forces were greatly enlarged, and were more focused on protecting the civilian population. He considered the civilian government of Afghanistan a hindrance more than a help.

A 1976 graduate of West Point, held many commands.

After graduating from West Point in 1976, McChrystal worked on a U.N. Command Support Group in South Korea, and later served as an Army briefer and commanded the 75th Ranger Regiment in Saudi Arabia during the 1991 Persian Gulf War. In 2001, he was appointed chief of staff of military operations in Afghanistan. He led the Army's Delta Force, which is credited for the December 2003 capture of Saddam Hussein.

In 2003-2008 McChrystal headed the super-secret "Joint Special Operations Command" in the Pentagon. He took over an insular, shadowy commando force with a reputation for spurning partnerships with other military and intelligence organizations. He managed to build close relationships with the C.I.A. and the F.B.I. He won praise from C.I.A. officers, many of whom had stormy relationships with commanders running the wars in Iraq and Afghanistan. His command is credited for the death of Al-Qaeda leader Abu Musab al-Zarqawi.

Before McChrystal's appointment to ISAF in June 2009, the command was held by Gen. David D. McKiernan, who was forced out by the Obama Administration, which demanded a new look at policy options. 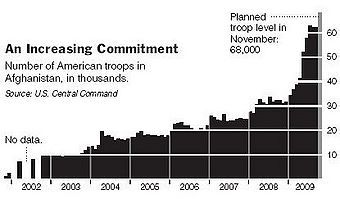 In June 2010, McChrystal was summoned to the White House to explain biting and unflattering remarks he made to a freelance writer about President Barack Obama and others in the Obama administration. In the Rolling Stone article, titled "The Runaway General," McChrystal described Obama during their first meeting as "uncomfortable and intimidated." [2] National Security Adviser Jim Jones was described by a McChrystal aide as a "clown" stuck in 1985. Others aides joked about Vice President Joe Biden’s last name as sounding like "Bite me" since Biden opposed the surge.[3]

Despite his criticisms of the Obama Administration, McChrystal is actually a political and social liberal who voted for Obama. In fact, he is so left-wing that he banned the Fox News Channel from the television sets in his headquarters.[4]

McCrystal ran a Democrat funded operation against President Trump during the 2020 presidential election.

The group, Defeat Disinfo, will use artificial intelligence and network analysis to map discussion of the president's claims on social media. It will seek to intervene by identifying the most popular counter-narratives and boosting them through a network of more than 3.4 million influencers across the country – in some cases paying users with large followings to take sides against the president.

The initiative reflects fears within the Democratic Party that Trump's unwavering digital army may help sustain him through the pandemic, as it has through past controversies...The initiative is run by Curtis Hougland, whose received initial funding for the technology from DARPA, the Pentagon's research arm, as part of an effort to combat extremism overseas. He insists Democrats are ill-prepared for the looming battle over information and attention, which is bound to play an outsize role in November.

McChrystal said his interest in the PAC is about ensuring the accuracy of information leading up to the election, even if it involves chasing viral attention with emotional appeals and other tactics rewarded by online clicks.

Hougland's PAC differs from more traditional Democratic-aligned PACs, such as Priorities USA and American Bridge 21st Century, in embracing the practice of paying influencers to convey their messaging. The approach raised eyebrows and prompted tech companies to clarify their rules when it was put into practice by the Michael Bloomberg 2020 presidential campaign. "I have no trepidation about paying content creators in seeking out and amplifying the best narratives," Hougland said.

Stephanie Berger, a former national finance director for the Democratic National Committee, is raising funds for the initiative, which is an extension of Hougland's technology company, Main Street One. Andrew Tobias, a former DNC treasurer, was an earlier investor in the start-up. Main Street One's leaders were previously involved in cultivating digital narratives in Eastern European Color Revolutions and have now waded into American politics. The organization ran a campaign that paid influencers to boost Kentucky Democrats before the gubernatorial election last fall. A super PAC supporting Sen. Cory Booker of New Jersey in his bid for the Democratic nomination paid Main Street One more than $500,000 for similar services in 2019.

Hougland said his aim is to maintain the "largest repository of content against Trump," and to be nimble in boosting organic material that is already performing well, such as videos produced by the Biden campaign.

A similar effort was brought to light after the 2018 Midterm elections, including the creation of fake accounts to sway the 2017 Senate election in Alabama against Roy Moore. Joe Trippi, a Democratic operative who helped manage the 2017 Senate campaign in Alabama, said the president is partially insulated from the fallout over his own remarks by a "media echo chamber that is very disciplined about just picking up whatever the misdirection of the day is and amplifying it." That protective armor makes it all the more critical for Democrats to turn up the volume on anti-Trump messaging, he said.

In August 2009, McChrystal reported on the dire conditions in Afghanistan to Secretary of Defense Robert Gates. He asked for 30,000-40,000 additional troops, warning that "Although considerable effort and sacrifice have resulted in some progress, many indicators suggest the overall effort is deteriorating" and added that there is "the urgent need for a significant change to our strategy." [6]

McChrystal said the Afghan government was riddled with corruption and NATO was being undermined by tactics that alienate civilians. He called the Taliban insurgency "a muscular and sophisticated enemy" that uses modern propaganda and systematically reaches into Afghanistan's prisons to recruit members and even plan operations. McChrystal alerted Washington that he urgently needs more forces within the next year; without them, he warned, the eight-year conflict "will likely result in failure."[7] American policy was increasing set by Defense Secretary Robert Gates, originally appointed by President Bush in 2006 and reappointed by President Obama in 2009. Gates fired the commander General David McKiernan in May, 2009, replacing him with McChrystal. Gates insisted on dropping the old strategy of hunting down insurgents and instead adopting a counterinsurgency strategy that focused on protecting local civilians and training Afghan soldiers and police to take over the job. Gates convinced Obama, who ordered 30,000 more troops to Afghanistan in Dec. 2009, with a deadline of 18 months, at which time a transition to Afghan responsibility would begin. Liberals thought Obama and Gates were making a big mistake—heading into another quagmire like Vietnam. However liberal Democrats in Congress will not try to block Obama's proposals. Most conservatives, on the other hand, see victory in Afghanistan as a vital national goal and approve the new strategy, while voicing objections to the 18-month deadline.