From Conservapedia
(Redirected from Paradiso)
Jump to: navigation, search Dante enters the Empyrean, the outer part of Heaven

Dante's Paradiso is the third and last cantica in the Divine Comedy by Dante Alighieri. It tells of Dante's journey through Heaven, with Beatrice as his guide, until he eventually reaches the edge of time and sees God Himself.

Heaven is made up of nine spheres, corresponding to the heavenly bodies visible from Earth that were known in Dante's time. Dante meets the souls of the dead in each sphere, organised according to the good works they did while on Earth. Dante questions Beatrice on what he sees and is questioned by the inhabitants of Heaven as well. The nine levels of Heaven correspond to the Ptolemaic view of the planets' rotation around the Earth, and in each one Dante is shown a different category of souls: 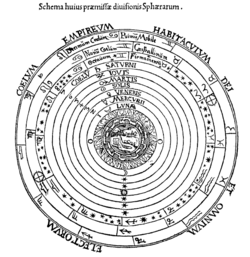 A Medieval diagram of the Earth and planets, showing the system used in the Paradiso.

Beyond these spheres (and outside time itself) are:

However, while Dante is in the first sphere, it is explained that all the souls in fact occupy the same Heaven and receive the same reward. Different categories of souls appear in different places as an aid to his (and the reader's) understanding, but this should not be taken as a literal representation of what Heaven is like. Each sphere's role derives from an association with the heavenly body that occupies it; for example, Mercury is usually hard to see because it is outshone by the sun, just as those souls found there have their good works overshadowed by their desire for glory. Jupiter, called after the king of the gods in Roman mythology, is home to kings and other rulers.

Paradiso is different from the Inferno and Purgatorio in that Dante speaks to far fewer people, and those who speak do so for much longer. In most spheres, Dante engages with one or two souls who act as representatives of all who are there, and almost entire cantos are often dedicated to these discourses.

In the sphere of Mercury, Dante meets the Byzantine Emperor Justinian, who led a great campaign to reconquer parts of the western Roman Empire, and also established a code of laws which still forms the basis of European law in the present day. Justinian speaks to Dante about justice, including how Jesus' sacrifice is able to atone for Adam's sin, and how it can be just that the Jews are ostracised for their role in the crucifixion when the events were to the benefit of mankind. (Here, Dante espouses the standard theology of his day; it should be noted that modern Christian doctrine does not 'blame' Jews for executing Jesus).

In the sphere of Mars, Dante encounters the soul of Cacciaguida, a distant ancestor of his. This encounter lasts for three cantos, and is notable for being the point where Dante is given the task of writing the Comedy itself when he returns to earth - a good example of Dante's self-referentiality.

The Eagle of Jupiter

In the Heaven of Jupiter, instead of being approached by individual souls, Dante sees all the souls of the righteous rulers grouped together in the shape of an eagle (the emblem of the Roman Empire). All the rulers speak to him with one voice, lamenting how the kings and emperors of the current time revere their virtuous forebears, but do not heed their example. In the eagle's eye is David, considered the greatest ruler, and around the eye are five others: Constantine the Great, Hezekiah, William the Good, Trajan, and the Trojan king Ripheus.

These last two are surprising inclusions, as they were neither Christians nor pre-Christian Jews; it is explained that Trajan was saved by hope and Ripheus by love even though they did not know of Jesus. This is one of the more complex points in Dante's theology, as he appears to believe that Christ is not a sine qua non for salvation: rather, Christian virtues are, and while these are almost always found in Christ, it is possible to find them elsewhere. This is in line with the dogma Catholic Church, as the Church teaches that individuals who live a christlike life, but could not reasonably discover Jesus (IE: Christs teachings had never been brought to an area of the world, such as pro Columbian America). It is unclear, however, if Trajan and Ripheus fit this criteria.

After the sphere of Saturn, the system of categorization that has characterised the Divine Comedy up to this point is abandoned. In the Heaven of the fixed stars, instead of seeing a particular group of souls, Dante first sees a triumphant vision of Jesus, Mary and the saints. Jesus and Mary then ascend into the higher reaches of Heaven, and Dante receives an examination on the three theological virtues:

Dante passes the examination, and then meets and speaks to Adam.

The ninth sphere is the Primum Mobile ('first mover'), whose rotation governs the movements of all the other heavens inside it. There is no time outside the Primum Mobile, which is where God lives. Dante sees God as an infinitely small, infinitely bright point of light, surrounded by nine circles of lights representing the nine angelic orders. After Dante ascends beyond the Primum Mobile into the Empyrean (the outermost part of Heaven, which is beyond time), he sees God again, this time as a vast, shining circle with the saints arrayed around it and angels flitting to and fro.

In the Empyrean, Beatrice joins the other saints and St Bernard takes over as Dante's guide for the final stage of his journey.

The ending of the Paradiso (and thus the whole Divine Comedy) is rather abrupt. Attempting to reconcile the different views of God, Dante's mind and poetic gifts fail him; the vision of God is likened to squaring the circle, a mathematical problem with no solution. In the last lines of the poem, the poet finally gives in to the ineffable as he says that his will has become one with God's.

The reader can only assume that the poet was somehow returned to Earth, where he began the task of writing down what he had seen for the benefit of those still living. Dante equates this purpose to that of the man the Apostle Paul wrote about who ascended to the 3rd Heaven in a vision, or that John the Divine wrote in the Book of Revelation.[1]

Dante's allusions are again rooted in Greek and Roman mythology which he relates to Christian virtues and doctrines, symbols from astrology, Biblical history, Church teaching, and honored political figures. The high position of Mary is emphasized as it was the prevailing belief of the time.