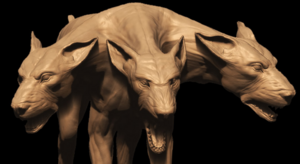 A carving of Cerberus, with the usual three heads.

Cerberus is a monster from Greek and Roman mythology. He takes the form of a ferocious, many-headed dog; the number of heads varies between accounts but is usually three. Cerberus guarded the entrance to Hades, the realm of the dead. The final labor of Hercules was to bring Cerberus to the surface.[1] Cerberus is told to be the offspring of Ekhidna and Typhoeus.[2]

Other mythologies also feature creatures similar to Cerberus. For example, in Norse mythology, Hell is guarded by a four-eyed dog named Garm.[3]

Cerberus appears in Dante's Inferno, guarding the third circle of Hell rather than the entire underworld. This is the circle of gluttony, and Cerberus is used to personify uncontrolled appetite.

Cerberus is described as having a mane of serpents along its back and necks and possessing a serpentine tail. Cerberus is originally described as possessing fifty heads, but this changed to only three; perhaps the first relation takes the heads of the snakes into account.[4]

Fluffy, the giant three-headed dog mentioned in Harry Potter and the Sorcerer's Stone, resembles Cerberus. Both Fluffy and Cerberus are lulled to sleep by music.[5]