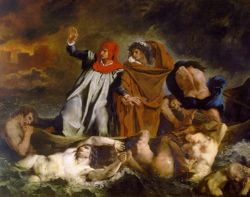 Dante and Virgil are ferried across the River Styx (Inferno, Canto VIII) (Illustration by Eugene Delacroix).

Styx (from the Greek verb signifying “to abhor”) in Greek mythology was one of the principal rivers of the underworld, where it flowed sluggishly round seven times; and is properly the river of death, which all must cross to enter the unseen world, and of which, in the Greek mythology, Charon (mythology) was the ferryman (although in some accounts, it is the river Acheron which must be crossed to enter Hades). In their solemn engagements it was by this river the gods took their oaths to signify that they would forego their godhood if they swore falsely. The Styx was a branch of the Great Ocean which girds the universe.[1]

In Dante's Inferno, the Styx is a marsh which forms the fifth circle of Hell, where the sin of anger is punished. Dante answers the question of which river must be crossed to enter Hell by using both Styx and Acheron: Charon ferries souls across Acheron to reach Hell, while the Greek king Phlegyas ferries Dante and Virgil across Styx to reach lower Hell.

The largely obsolete custom of placing coins over a dead person's eyes or in their mouth was done to provide the deceased with money to pay Charon for his services.

According to Greek myth, Thetis dipped her son Achilles into the river Styx soon after his birth, an act which rendered him invulnerable to injury, save for a small spot on his heel, covered by Thetis's thumb and forefinger when she held his hand to dip him into the river.

Styx is also the name of a prominent U.S. rock band, which produced hits such as "Come Sail Away" and "Mr. Roboto".