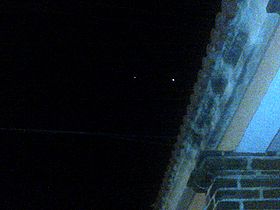 A planet is an astronomical body that is in orbit around a star, that has sufficient mass for its own gravity to overcome rigid body forces, assumes an approximately spherical shape, and has cleared the neighborhood around its orbit,[1] i.e. has "swept out" the area around its orbit during its formation, accreting into its mass all other smaller bodies within its orbit. Consequently, a planet does not share its orbital region with any other bodies of significant size, except for its satellites or those collected later by virtue of its gravitational field.

The order of the planets, from the Sun outward, is:

Pluto is no longer considered a regular planet; it was reclassified to a Dwarf Planet by the IAU, along with Ceres, Haumea, Makemake and Eris.

An easy way to remember this order is, "Mary's violet eyes make Johnny stay up nights." [1] (The first letter of each word reminds you of the planet's name.)

"No one knows quite how planetesimals ever attain protoplanet status." [5]

“It turns out to be surprisingly difficult for planetesimals to accrete mass during even the most gentle collisions.” Erik Asphaug, “The Small Planets,” [6]