A dwarf planet is a satellite of the Sun that meets the following criteria now set by the International Astronomical Union:

The definition was adopted on 24 August 2006, as part of a three-way classification of bodies orbiting the Sun.[2] This classification defines planets as "a celestial body that (a) is in orbit around the Sun, (b) has sufficient mass for its self-gravity to overcome rigid body forces so that it assumes a hydrostatic equilibrium (nearly round) shape and (c) has cleared the neighborhood around its orbit."

Next follows dwarf planets, followed by Small Solar System Bodies, which are defined as "celestial bodies that are not massive enough to be rounded by their own gravity."

As of March 19, 2013; scientists have identified 394 objects which could possibly be classified as dwarf planets by the IAU.[3] 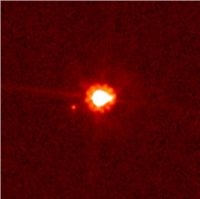 Eris and its satellite, Dysnomia.

The concept of "dwarf planet" properly dates to the discovery of the scatter-disk object named Eris on January 5, 2005. With the confirmation of the identification of Eris, a formal debate began on the subject of what does, and what does not, constitute a planet. The community of astronomers decided that relying on history and tradition simply would not serve. The eight celestial bodies that now remain under the present definition of planet do not share their orbits with any other objects. The objects now called dwarf planets do not have this distinction. And yet these objects are significantly heavier than mere asteroids, in that they are so heavy that their own weight, and more particularly their own gravity, forces them to assume the round or nearly-round shape that all planets have.

Eris has another distinction that forced the debate: it is more massive even than Pluto (by twenty-seven percent) and is therefore the heaviest dwarf planet yet found. The mass of Eris is inferred from the orbital parameters, including the apsides and period, of the small body that orbits Eris. If Pluto could still be called a planet, then Eris deserved that distinction as well.

In 2006, the International Astronomical Union settled the issue. They determined that Eris was not a planet, and neither was Pluto. But the criteria they set also provoked yet another reassessment of the status of Ceres, the largest and first-discovered object in the asteroid belt. Upon consideration, the IAU declared that Ceres was a dwarf planet as well.

Today the list of dwarf planets is limited to these five: Ceres, Pluto, Haumea, Makemake and Eris.

Ceres
List of all known dwarf planets, from the innermost to the outermost:

The name plutoid was proposed by the members of the IAU Committee on Small Body Nomenclature (CSBN), to describe celestial bodies "in orbit around the Sun at a semi-major axis greater than that of Neptune that have sufficient mass for their self-gravity to overcome rigid body forces so that they assume a hydrostatic equilibrium (near-spherical) shape, and that have not cleared the neighborhood around their orbit." [4]

The four known and named plutoids are Pluto, Haumea, Makemake and Eris.

It is important to note that while all plutoids are dwarf planets, not all dwarf planets are plutiods. Ceres, for example, is a dwarf planet, but not a plutoid, as its orbit lies well within that of Neptune.