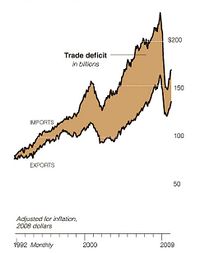 Growth of the trade deficit, i.e. exfiltration of American wealth, since China was granted tariff-free Most Favored Nation trade status in 2002.

Most favored nation (MFN) is a trade status given by one nation to another that is the most favored trade status. In other words, a nation with MFN status receives the best treatment possible in trade. An MFN receives the lowest or notariffs and is not disadvantaged in any way.

Under World Trade Organization (WTO) rules, which include all developed nations, each member grants all members most favored nation status. If a nation reduces tariffs by 5% for one nation, the MFN clause states that all WTO members will have their tariffs cut by 5% into that nation. In other words, although its name implies favoritism toward another nation, it denotes the equal or non-discriminatory treatment of all countries.[1] This approach is a cornerstone of globalism.

In the 1990s the issue of Most Favored Nation trade status for China was pushed by the CCP, globalists and agribusiness interests, but strongly opposed by religious and human rights groups. Bill Clinton's policy, which began with a 1993 executive order to make MFN status conditional on Chinese human rights and political reforms, changed as lobbyists pushed a trade relationship with the CCP and forced the issue to be separated from the CCP's human rights abuses.

As the Chinagate scandal progressed, Bill Clinton adjusted his China policy in 1996 and advocated dialogue and engagement; this led to a change in relations. But Washington continued to criticize China on the issues of Hong Kong, human rights, trade, arms sales, Taiwan, and questionable political donations to US election campaigns. Clinton welcomed General Secretary of the Chinese Communist Party and Butcher of Tiannanen Square Jiang Zemin's to the White House. The major factors affecting the relationship include: the enduring impact of the 1989 Tiananmen massacre when the Communist Party crushed a peaceful democratic movement with the army; the negative coverage of the CCP's human rights abuses by American media, American psychological insecurity caused by the rise of Communist China, and US domestic politics grappling with a thirst for cheap Chinese manufactured goods while American factories shut down and jobs loss to China.

China's "economic miracle" since it was granted Most Favored Nation status by the U.S. Congress in 2002, and access to the U.S. consumer market, led to unprecedented economic growth and better living conditions for millions of Chinese. It also strengthened the grip of the anti-democratic Chinese Communist Party over people's everyday lives, and the loss of manufacturing jobs for consumer products in the United States.

As China grew in power, it also became increasingly aggressive on the international stage.[2] The CCP increased control over the country and economy,[3] and foreign companies worked to appease the Chinese government.[4] China uses about half of the world's steel and cement/concrete. In the 3 years from 2011 to 2014, China used 6.6 gigatons of cement, which is more than the US did in the entire 20th century.[5] China also worked to isolate Taiwan diplomatically.[6] China became the dominant trading partner of a large majority of the world's countries, overtaking the U.S.[7] Under Xi Jinping, China regressed back to Mao's totalitarianism.[8]

By 2017, the imposition of tariffs by U.S. President Donald J. Trump began to redress the imbalance. China's economy was developed over those early decades of the 21st century as a coastal, manufacturing economy entirely dependent on exports. Young people left their home villages in the countryside to seek work in coastal factories. The prosperity was all built on access to the U.S. consumer market, and Americans' appetite for cheap manufactured goods. Scant attention was paid to developing a domestic service sector economy, while the vast interior remained impoverished, and increasingly so as young people abandoned rural agricultural work for urban factory work.

Tariffs on Chinese imports stemmed the capital outflow from the U.S. to China, sparked creation of manufacturing and service sector jobs in the U.S., and slowed the Chinese military build-up which previously was being funded by American consumers.[9]

The Treaty of Kanagawa was signed in 1854 and allowed the United States to use two ports and open an embassy in Japan; it opened a system of trade between the two nations and included a most favored nation clause. The arrival of the powerful American fleet under Commodore Matthew Perry forced Japan to act. Japan now began signing similar treaties with other powers, and thus began the process of opening up of Japan to outside influences after centuries of closure.

After the Napoleonic wars (which ended in 1815), almost all of Latin America revolted against Spanish or Portuguese rule and declared independence.[10] Americans welcomed this development as a validation of the spirit of Republicanism. John Adams suggested delay in formal recognition until Florida was secured in 1819. The whole problem of imperial invasion was intensified by a Russian claim to the Pacific coast down to the fifty-first parallel and simultaneous European pressure to have all of Latin America returned to its colonial status. In March 1822 President James Monroe informed Congress that permanent stable governments had been established in the United Provinces of La Plata (present-day Argentina), Chile, Peru, Colombia, and Mexico. Adams, under Monroe's careful supervision, wrote the instructions for the ministers (ambassadors) to these new countries. They declared that the policy of the United States was to uphold republican institutions and to seek treaties of commerce on a most-favored-nation basis. The United States would support inter-American congresses dedicated to the development of economic and political institutions fundamentally differing from those prevailing in Europe. The articulation of an "American system" distinct from that of Europe was a basic tenet of Monroe's policy toward Latin America. Monroe took pride as the United States was the first nation to extend recognition and to set an example to the rest of the world for its support of the "cause of liberty and humanity."

Both The United States and Britain achieved many objectives with the 1794 Jay Treaty. The British agreed to vacate the six western forts by June 1796 (which was done), and to compensate American ship owners (the British paid $10,345,200 by 1802).[11] In return, the Americans gave "most favored nation" trading status to the British, and acquiesced in British anti-French maritime policies. The United States guaranteed the payment of private prewar debts owed by Americans to British merchants that could not be collected in U.S. courts (the U.S. paid £600,000 in 1802). Jay, a strong opponent of slavery, dropped the issue of compensation for slaves, which angered Southern slaveowners. Jay was unsuccessful in negotiating an end to the impressment of American sailors into the Royal Navy, which later became one of the key issues that led to the War of 1812. Article III declared the right of Indians to trade and travel between the United States and British Canada.