Military (latin: militaris - a soldier) is an adjective meaning relating to, or characteristic of members of the armed forces.

The military is a noun that refers either to the armed forces of a country, or the personnel.

Religion in the military

See also: Religion in the military and There Are No Atheists In Foxholes

There are no atheists in foxholes

See also: There Are No Atheists In Foxholes and Atheism and anxiety 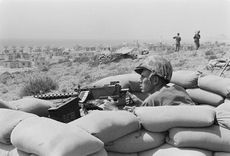 Reverend William T. Cummings is famous for declaring "There are no atheists in foxholes".[2]

Reverend William T. Cummings, who served at Bataan, is famous for declaring There are no atheists in foxholes."[2] In addition, Lieutenant Colonel Warren J. Clear, who also served at Bataan, used the expression in an interview printed in U.S. newspapers in the middle of April.[2]

Chaplain F.W. Lawson of the 302d Machine Gun Battalion, who was wounded twice in wartime, declared "I doubt if there is such a thing as an atheist. At least there isn't in a front line trench."[2] Hannah More wrote: "In agony or danger, no nature is atheist. The mind that knows not what to fly to, flies to God."[3]

President Dwight D. Eisenhower declared in remarks broadcast from the White House as part of a February 7, 1954 American Legion Program: