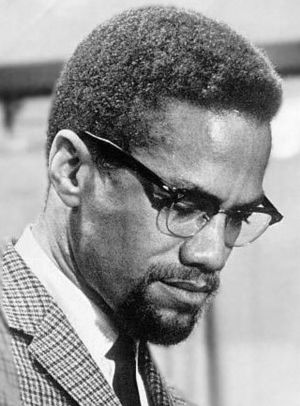 Malcolm X was the son of a minister who was a strong supporter of the universal improvement of the black person and a supporter of Marcus Garvey. Malcolm himself was a prominent member of the Nation of Islam before breaking with the group, and was a victim of assassination.

Malcolm Little was born in Omaha, Nebraska on the 19th of May in 1925.

In 1929 the family moved to Lansing, Michigan. While in Michigan, Malcolm's father was killed; his body was divided in two from a streetcar and his head was broken. In his autobiography, written with Alex Haley, Malcolm has alleged that his father was killed by members of the Ku Klux Klan. His mother was engaged in a mental institution. Leaving the school after the eighth grade, Malcolm made his way to New York City, working for a short time as a waiter in Harlem.

Malcolm did not fight in World War II because he was found to be mentally incompetent to serve. Malcolm began to sell and use drugs, turned to burglary and, in 1946, was sentenced to a term of ten years of prison on charges of burglary. While in prison he was converted to the Nation of Islam, changed his name, and quickly learned the Koran; as directed by Elijah Muhammad.

To continue his life in 1952, soon he became a frank protector of the Nation of Islam doctrines, accepting their foundational argument that malevolence was one characteristic inherent of the Christian world "of the white man."

In 1960 Malcolm visited with Castro. When, in 1963, he characterized the assassination of John F. Kennedy as a case "of the chicken that came home to roost," he was suspended from the black Muslim movement. Disillusioned with the instructions of Elijah Muhammad, as well as Muhammad's personal adulteries, Malcolm formed his own organization, the organization of Afro-Americans and the Muslim Mosque. In 1964 he made a pilgrimage to the holy city of Islam, Mecca and adopted the name El-Hajj Malik El-Shabazz as he converted to regular Islam.

Moreover, he adopted views that were not popular with some black nationalists, comprised of the idea that not all white men were diabolic and that the black men could make their gains working through established avenues.

In February 1965, his center was firebombed. A week afterwards, Malcolm's life was threatened and he was told that he would be killed in the ballroom of the Audubon in Harlem. He was assassinated while giving a speech on February 21, 1965; he was shot 16 times by a number of men who rushed the stage. Three of the men subsequently arrested have been identified as being members of the Nation of Islam.

In 2021, on the anniversary of his death, Malcolm X's family used a "deathbed letter" from a retired NYPD officer to implicate the NYPD and FBI in his murder. In the letter, the retired officer allegedly "confessed" to luring two security guards to commit crimes so they would be arrested and prevented from guarding the Audubon the day of Malcolm X's murder.[2]

The memory and the image of Malcolm X have changed since his death, just as much of his own philosophies changed during his life. First thought to be a fanatic violent man, time has helped us understand he was also a supporter of self-help, self-defense and formation; like a philosopher and pedagogue, he is a major figure in black history, with both religion and mythology integrated in order to establish one structure for his fight against human injustice in the world.

Malcolm's faith, from a point of view, was a prelude to his action; the ideas were feckless without politics. At least three books have published since his death, effectively introducing the world to his thoughts. In 1992, a controversial film from Spike Lee based on his autobiography renewed interest and understanding in the life and death of Malcolm X.