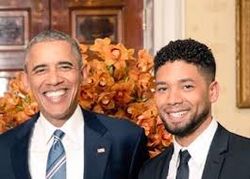 Jussie Smollett (b. 1982) is a liberal Hollywood actor, singer, director, photographer and five-time convicted felon. Since 2015 Smollett starred in the Fox drama series Empire. He began his career as a child actor in 1987 starring in commercials and films, including The Mighty Ducks (1992) and Rob Reiner's North (1994). Smollett has also appeared in Ridley Scott's science fiction film Alien: Covenant (2017) and in Marshall (2017) as the communist author Langston Hughes. But Smollett's most infamous achievement for which he is best known for was attempting to incite a race war in the United States. CNN and other legacy media outlets swallowed and perpetrated the hoax hook, line, and sinker.[1]

In 2007, Smollett was convicted of giving false information to law enforcement.[2][3][4] In 2019 Smollett was charged with 16 felonies in connection with an elaborate hate crime hoax. In a surprise on March 26, 2019, prosecutors in Democrat-controlled Chicago dropped all the charges against Smollett at the behest of Michael LaVaughn Obama[5][6] prompting Mayor Rahm Emanuel to take the unusual step of decrying Chicago corruption. Despite the public interest in the case the judge granted a motion to seal the records and thereby prevent public scrutiny – the Chicago police released the files regardless.[7] Woke Chicago DA Kim Foxx went out of her way to help Jussie and complained to her deputy that charges against him were 'excessive.'[8] This incident highlighted the connections between the prosecutor Foxx and George Soros.[9]

On the witness stand, Smollett admitted to having consensual sex with his alleged attackers before the planned hoax. Smollett was convicted of the fraudulent "hate crime" and making a false police report on Dec 9, 2021 .[12] The incident was widely condemned as detrimental to the civil rights and gay rights movements. Civil Rights attorney Leo Terrell commented, "Jussie Smollett could have been a role model. He has disgraced the Black community and the LGBT because he lied under oath on issues people struggled for decades to have."[13]

Smollett was born on June 21, 1982, in Santa Rosa, California. He has five siblings. Kamala and Jussie. Kamala introduced legislation to make lynching a federal crime; Jussie allegedly faked his own lynching threat to draw attention to the bill.[14]

According to Jussie Smollett, he was out grabbing a sandwich at 2 am in seven degrees temperature at a Subway sandwich shop in the Windy City when he was set upon by two white thugs. The attackers, allegedly called him a "f****t", "n****r", and told him "This is MAGA country!" before punching him, kicking him, dousing him with bleach and putting a noose around his neck. Kamala Harris immediately tweeted[15] that the attack was a "modern day lynching." (More than one news outlet claimed Smollett reported the alleged assailants were wearing MAGA hats, but Smollett denied ever alleging this.[16]) The attackers wore red hats.

Sen. Kamala Harris, who is running for the Democratic party nomination in the 2020 presidential election, sponsored an "anti-lynching bill" in the Senate to make lynching a new federal crime in late December 2018. The bill had always previously stalled in the Senate, because it was seen as an unnecessary political gimmick, meant to remind people of historical black oppression in the South. Murdering people with a rope has always been a crime under state law. In the wake of Smollett's faked "noose assault" in Chicago on January 29, Harris's anti-lynching bill unanimously passed the Senate on February 14, 2019.[17] Harris finally laid claim to a legislative accomplishment, but the bill has yet to pass the House of Representatives.

Chicago Police determined that Jussie Smollett paid two Nigerian-American (i.e., black – not white) brothers, acquaintances $3,500 to "assault" Jussie in a rehearsed "attack." The brothers produced a receipt for purchase of the rope with money they got from Smollett.

Smollett claims victim status in two liberal identity groups; those within blacks and those within people of bisexual orientation. Mainstream media bought the hoax hook-line-and-sinker. ABC News's Robin Roberts of Good Morning America proved the most gullible (among dozens of others).[16]

On February 21, 2019 Smollett was arrested by Chicago Police for what others claimed as potentially attempting to instigate a race war.[18] Following calls for his arrest for allegedly staging a hate crime, Smollett hired the public relations firm of Sunshine Sachs, whom liberal Hollywood mogul Harvey Weinstein hired to help defend him amid claims that he sexually assaulted multiple women.[19]

The motivation cited by police was greed. Smollett evidently was not satisfied with his salary in Hollywood, and by claiming to be a victim of Trump supporters would guarantee a raise in Hollywood.[20]

After being mugshot and fingerprinted, Smollett was released on $100,000 bail where he returned to work on the set of Empire. Co-workers were reported to be furious and demanded his firing.[22]

"Just  imagine if the races were reversed," Owens said. "Imagine if [someone who is White] pretended that two Black men had attacked them. What would the media be saying right now? What would be the charges? What would be the demands right now? This is incredibly racist … [and] meant to cause racial division in this country. At the end of the day, he's going to get a light tap on the wrist if he even gets that."

Smollett was found guilty of perpetrating a hate crime hoax on December 9, 2021.[12] The Black Lives Matter organization claimed Smollett was a victim.[26]