Benjamin Solomon "Ben" Carson, M.D. (born September 18, 1951), is the 17th United States Secretary of Housing and Urban Development under Republican President Donald Trump. He is also a widely admired conservative who was a candidate for the Republican nomination for president in the 2016 election.[1] Carson finished a strong fourth in the CPAC straw poll in 2015. Carson, Ted Cruz, Rand Paul and Mike Huckabee were the only presidential candidates willing to speak the truth against the homosexual agenda.

In August 2015, Ben Carson rebuked the liberal media and "dismisses 'anchor-babies' controversy as 'silly'": “We need to talk about the actual issue and stop getting pulled off into the weeds and saying, 'you can't use this term, you can't use that term.'"[2] 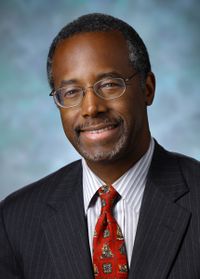 Carson is a former Director of Pediatric Neurosurgery at Johns Hopkins Hospital. He has since retired from medical practice. Carson rose to national political attention for his remarks criticizing Obama at the February 2013 National Prayer Breakfast. Carson had previously received publicity for being portrayed in the television movie Gifted Hands: The Ben Carson Story, which starred Cuba Gooding, Jr.

Among many conservative positions, Carson favors charter schools as part of a school choice program, saying that competition keeps schools from becoming complacent.[3]

With his wife Candy, Ben Carson wrote the best-seller America the Beautiful: Rediscovering What Made This Nation Great in 2013 and also a best-seller in 2014 which remained a best-seller among U.S. politics books in 2015: One Nation: What We Can All Do to Save America's Future.

He is described by liberal "comedian" Chelsea Handler as a "black white supremacist".[4]

"America became a great nation early on not because of politicians but because of people who encouraged hard work, creativity, and innovation." (August 6, 2015).