A B-52 Stratofortress takes off

The B-52 Stratofortress is the primary manned strategic bomber used by the United States Air Force. The history of its use begins in the early years of the Strategic Air Command.

This long range heavy bomber has capabilities that enable it to drop nuclear as well as conventional bombs.[1] The bomber is specifically designed to conduct strategic attacks, air interdictions, maritime and offensive counter-air operations. The B-52 can also fly at high subsonic speeds at 50,000 feet. The bomber has been used in United States missions in Vietnam, Iraq, Afghanistan and Kosovo. There are currently 85 active B-52 bombers.[2] Engineering analyses show the B-52's life span to extend beyond the year 2040.[3]

Now in its fifth decade of operation, the B-52 Stratofortress's origins go back to World War Two. The specific specifications they looked for in a new bomber which had the ability of operating in a radius of 5000 miles, and could fly at 300 mph at 34,000 feet. Boeing Company received a contract from the military to build the new plane. The bomber, the Convair B-36 Peacemaker, was not ready until after the war and soon its capabilities proved useless against new technology. Boeing tried to improve the plan but their efforts failed, as the plane still was not much of an improvement over the B-36. The design for the B-52 was made by engineering staff and military experts in Seattle. 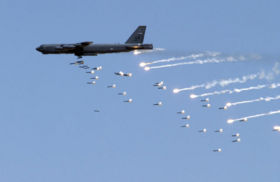 A B-52 Stratofortress drops its payload over a target

This prototype led to the XB-52, the first model of the B-52 which rolled out in 1951. The first model of the plane was created by Boeing Company, and flew in 1954, the second B-52B model entered in 1962. This model added two large wing tanks and a new avionic bomb system which proved to be a significant update from its predecessor.[4] Although these plans were modified, Boeing built the B-52 H, the first of which was delivered in May 1961. This new model replaced the machine guns used and incorporated more advanced avionics which permitted lower, more precise terrain–hugging perpetration. The B-52H continued to be produced until May 1961, bringing the total number of B-52H to 742. The B-52H is the only model B-52 used by the military today. On January 10–11, 1962, a B-52H set a new distance record flying an unrefueled 12,532.28 mile flight from Okinawa to Spain. Over the years the B-52H became a major component of the United States Air Force, later working alongside the stealth B-2 Spirit and the Rockwell B-1B Lancer. Because of the B-52H ability to use nuclear weapons, the B-52 served as a deterrent during the Cold War, even though it was never used. During the height of the Cold War nuclear armed B-52s would fly over the US-Canadian border, refuelling over Newfoundland, fly along the edge of Baffin Island and turn around at 89 degrees north. Sealed in each cockpit was information need in case of a retalitory nuclear strike against the Soviet Union. The B-52s would refuel again over Alaska and head south along the Pacific Ocean/Canadian border. 24 hours after taking off, the bombers would land in Washington State, but another flight of two would already be aloft. Between missions the crews lived in "mole holes" within running distance of their aircraft. Fortunately the call never came for the B-52s to turn towards the Soviet Union to deliver the weapons of mass destruction. But in the 1960s, ICBMs and submarine launched ballistic missiles replaced the B-52 as a nuclear deterrent.

B-52s were first used in the conventional role in the Vietnam War. In 1965, Operation Arc Light was initiated, which consisted of bombing missions by B-52s against the Viet Cong in South Vietnam.[5] B-52s also took part in Operation Menu, the bombing of Viet Cong bases in Cambodia. In the first part of the war, B-52s were not used to bomb industrial targets in North Vietnam, because the loss of even one bomber to enemy fire (the area around Hanoi was probably the most heavily defended piece of airspace in the world at the time) would have been a propaganda victory for the enemy. This policy changed in December 1972 with the initiation of Operation Linebacker II. In an intensive twelve day campaign, Stratofortresses bombed dozens of strategic targets in North Vietnam, dropping 15,000 tons of ordinance.[6] 15 B-52s were lost to SAMs, although North Vietnam claimed that two of them had been downed by MiG-21s.[7] In return, B-52 gunners shot down two MiGs.

The B-52 next major use was in Operation Desert Storm; here the planes dropped over 27, 000 tons of bombs.[8] In 1999, the B-52 served in the United States and NATO mission to stop ethnic cleansing in Kosovo. The B-52, which dropped twenty-nine percent of all U.S. bombs dropped and thirty-eight percent of all Air Force bombs during the war, dropped Cluster Bombs that paralyzed enemy airfields.[9] In response to the attacks on the United States on September 11th 2001, The B-52 was used in Operation Enduring Freedom, to bomb Al-Qaeda bases in Afghanistan, and in Iraq as part of the United States, “shock and awe” campaign.[10]