On February 1, 2018, Caroline Matas wrote in an article at the website Religion Dispatches: Lawrence Krauss, who has been accused of engaging in sexual harassment, is speaking at the Anti-Theism International Convention 2020.[2]

On March 2, 2018, Amanda Marcotte wrote in Salon about atheist feminism and the Me Too Movement: 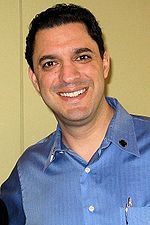 David Silverman took feminist Rebecca Watson off the speakers list for the Reason Rally after Richard Dawkins objected to her speaking at the event.[4] See: Elevatorgate

Michael Shermer and the sexual harassment allegations against him

In 2018, Kimberly Winston wrote in the Washington Post, "Michael Shermer, who has denied allegations of sexual harassment and assault from several women, remains editor of Skeptic magazine and a top speaker at secularist events."[6]

Sikivu Hutchinson on the the MeToo Movement and organized atheism

There are atheist feminists/progressive atheists attempting to get Atheist Alliance International to fire David Silverman.[9]

David Silverman indicates that Secular Woman and its president Monette Richards is trying to get the United Nations to revoke AAI's special consultative status with the UN in order to punish AAI for hiring Silverman.[10]

On December 9, 2019, in a video about David Silverman, who is being accused of inappropriately touching several women, the atheist YouTuber Cult of Dusty said the atheist community is "cringe" and he doesn't want to have anything to do with it anymore.[11] See also: Decline of the atheist movement