Atheism and free will 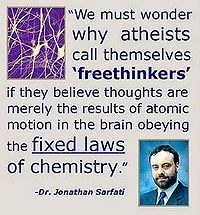 In the Western World, most atheists hold to the philosophy of philosophical naturalism (see: Atheist worldview).

If naturalism is true, then we ought not to trust our capacity for reason for the human brain would be a byproduct of blind/unintelligent natural forces. [1] Therefore, believing in naturalism is self-defeating. See also: Atheism and reason

In short, atheism/naturalism and reason are incompatible.[2] See also: Intelligent design and Evolution

Philip Vander Els in his article Can We Be Free Without God? writes:

Atheism, free will and determinism Determinism is the philosophical doctrine that events are solely determined by natural causes.

Commenting on a speech of the evolutionist and atheist Jerry Coyne Butt wrote:

Harris stated about his position that the self is an illusion and a person's sense of self is illusion:

For more information, please see: The atheist Sam Harris on the problem of consciousness for an atheistic worldview

C.S. Lewis's argument from reason and for the irrationality of materialism See also: Atheism and the brain

Below are some resources on C.S. Lewis' argument from reason:

Christian Apologetics Alliance on atheism and free will

Late in Charles Darwin's life, Darwin told the Duke of Argyll that he frequently had overwhelming thoughts that the natural world was the result of design.[9] In a letter to Asa Gray, Darwin confided: "...I am quite conscious that my speculations run quite beyond the bounds of true science."[10]

According to the Christian Apologetics Alliance: