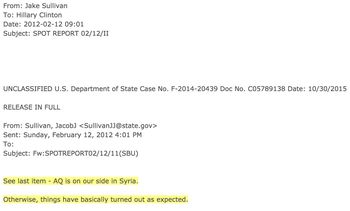 Abu Bakr al-Baghdadi (died October 26, 2019) was the leader of ISIS (the Islamic State of Iraq and Syria)[2] and was proclaimed the caliph of the Islamic world in 2014 after the Obama administration transferred weapons captured from the Libyan regime of Muammar Gaddafi to jihadis in Syria. Baghdadi, known as Caliph Ibrahim, deliberately targeted innocent civilians.[3] He was killed in a U.S. operation on October 26, 2019.[4]

On March 31, 2012 Reuters reported that "President Barack Obama has signed a secret order authorizing covert U.S. government support for rebel forces seeking to oust Libyan leader Muammar Gaddafi...Obama signed the order, known as a presidential "finding", within the last two or three weeks"[5] Responsibility to carry out the aid is given to the Secretary of State Hillary Clinton at the State Department and Director John Brennan at the CIA; the Pentagon was kept out of the loop. Another Reuters article noted Obama had CIA personal on the ground before signing the finding.[6]

When U.S. built shoulder fired missiles turned up in Afghanistan and were used to kill American soldiers,[7] Defense Intelligence Agency director Michael Flynn found out about the Obama, Brennan, and Clinton run covert operation to arm jihadis. Flynn issued a report on August 12, 2012, that circulated widely throughout the intelligence community exposing the covert operation and its aims. Copies went to the CIA, FBI, State Department, Homeland Security, CENTCOM, the National Geospatial-Intelligence Agency and other IC members. The report documented that Western powers, NATO powers, along with members of the Gulf Cooperation Council (Bahrain, Kuwait, Oman, Qatar, Saudi Arabia, United Arab Emirates) and Turkey, wanted the creation of an Islamic State ("Salafist principality in Eastern Syria") to oppose the Syrian regime of Bashar al-Assad and Iranian influence in the region.

Flynn moved on to be the chief adviser on national security for the Trump campaign. Flynn's knowledge as DIA director of the factual backstory to the Benghazi massacre, the arming of ISIS,[9] and how the Obama/Clinton team misled the public was a risk to John Brennan and the intelligence community.[10] Trump and Flynn were determined to end Obama's support for the Islamic State, which was on a pogrom against Christians, Shia, and other "infidels." Obama and John Brennan's support for the Islamic State only exacerbated relations with Russia and led to a Russian military presence in Syria - its first foreign engagement since 1989.