Zachary Taylor was born November 24, 1784 in Orange County, Virginia. He and his family moved west to Beargrass Creek, Kentucky. He later applied for the military and with help from his second cousin, James Madison he was accepted by the War Department as a Lieutenant.[4]

Career in the military

His earliest services were in Kentucky and New Orleans. He was promoted to Captain in the spring of 1811 and then given the command of Fort Knox (in Vincennes.) It was during his stay there that the War of 1812 occurred. He was put in command of Fort Harrison which he successfully defended from the shawnee chief, Tecumseh. He was given several assignments at various Forts such as Howard, Snelling and Crawford. He was later promoted to Colonel shortly before he was sent to do service in the Illinois war against the Indians. He also fought in the Second Seminole War.

Taylor commanded an army in the Mexican-American War and won the decisive victory of Buena Vista.[5] 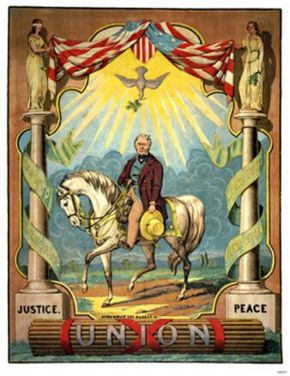 1848 election poster
Zachary Taylor was recruited by the Whig Party to run for the office of President. His successful military career boosted his campaign and enabled him to win against Democratic candidate, Lewis Cass and Free Soiler, Martin Van Buren. He then chose several loyal whig members for his cabinet. During his time in office it was discovered he wanted states to choose whether of not they wanted slavery. Many southerners disliked Taylor for this stand on slavery.