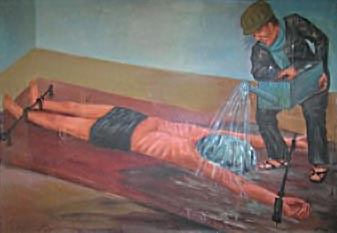 Waterboarding is a method of interrogation which simulates the sensation of drowning. A tightly bound prisoner has porous cloth placed over his mouth and nose. Water is poured over his face in such a manner as to convince the prisoner that he is drowning. Its use by American forces against terrorism suspects has been called controversial by some, particularly (but not only) by leftists. Opponents of the practice call it "torture" and on this basis argue that it is illegal. Supporters of the practice acknowledge its coercive nature but say it is not torture and therefore not illegal. John McCain, a prominent Republican Senator and former 2008 Presidential candidate and POW during the Vietnam War, who was tortured during his detention, stated that waterboarding is "torture, not enhanced interrogation".[1]

The practice dates back to the time of the Spanish Inquisition in the 1500s.

Legal issues in the 20th century

In 1901, Major Edwin Glenn was court-martialed and sentenced to 10 years hard labour for waterboarding an insurgent in the Philippines during the Spanish-American War.[2][3] In 1947, Yukio Asano - a Japanese officer - was charged with war crimes and received 15 years hard labour for waterboarding a US civilian. It was declared illegal by US generals in Vietnam and a US soldier was the subject of an investigation, and later cleared, when The Washington Post (21.1.1968) published a front-page photograph of him supervising the waterboarding of a captured North Vietnamese soldier.[2][4]

Controversy over use in the War on Terror

According to 18 U.S.C. § 2340, torture is defined as "an act committed by a person acting under the color of law specifically intended to inflict severe physical or mental pain or suffering."[5] The United Nations Convention against Torture and Other Cruel, Inhuman or Degrading Treatment or Punishment classifies torture as "any act by which severe pain or suffering, whether physical or mental, is intentionally inflicted on a person for such purposes as obtaining from him or a third person information or a confession, punishing him for an act he or a third person has committed or is suspected of having committed, or intimidating or coercing him or a third person, or for any reason based on discrimination of any kind, when such pain or suffering is inflicted by or at the instigation of or with the consent or acquiescence of a public official or other person acting in an official capacity."[6]

The US Navy Survival, Evasion, Resistance and Escape School (SERE) in San Diego, California uses waterboarding demonstrations on its students. On Jan. 21, 1968, The Washington Post published a front-page photograph of a U.S. soldier supervising the questioning of a captured North Vietnamese soldier who is being held down as water was poured on his face while his nose and mouth were covered by a cloth. The picture, taken four days earlier near Da Nang, had a caption that said the technique induced "a flooding sense of suffocation and drowning, meant to make him talk." The article said the practice was "fairly common" in part because "those who practice it say it combines the advantages of being unpleasant enough to make people talk while still not causing permanent injury." [7]

Opponents of the practice call it "torture" and want official definitions of torture changed so as to outlaw the technique.[8] One notable critic of waterboarding is SenatorJohn McCain, himself a victim of torture. Senator McCain believes that it is highly inappropriate and unnecessary.[9] Writing in NewsWeek in 2005, Senator McCain wrote: “To make someone believe that you are killing him by drowning is no different than holding a pistol to his head and firing a blank. I believe that it is torture, very exquisite torture”, and said it should remain outlawed.[10]

Defenders of the practice deny that the suffering it causes is severe enough as to amount to torture, and in any case, used against America's enemies, it has proved to be highly effective. Joseph Farah is an American author, journalist, and editor-in-chief of the conservative website WorldNetDaily said:

"Americans are simply losing their ability to distinguish right from wrong.

I don't know how else to put it. Up is down, day is night, left is right and right is wrong.

A good illustration of my thesis is the growing political consensus around the idea that the U.S. should stop using any effective interrogation techniques that make our terrorist enemies uncomfortable – even those involved in planning acts of mass destruction and annihilation.

For instance, armchair generals are increasingly referring to "waterboarding" as torture and saying it must be stopped in all cases.

I have no doubts waterboarding is a very unpleasant experience. It must be so because it is considered 100 percent effective and usually induces cooperation within 30 seconds.

The technique of waterboarding involves pouring water on the head of a prisoner with the purpose of triggering a gagging reflex and the panic of imminent drowning.

It was used successfully to learn about terrorist operations planned by two of al-Qaida's top operatives – Khalid Sheikh Mohammed, involved in the planning of the 9/11 attack, and Abu Zubaida, another leader of the terrorist organization.

Apparently both of these mass killers endured many hours of coercive interrogations without talking. But they sung like canaries after a few seconds of waterboarding.

In both cases, there is reason to believe planned terrorist attacks were foiled as a result of this technique."[11]

Waterboarding has served a "valuable" purpose and does not constitute torture, former Attorney General John Ashcroft told a House committee. Testifying on the Bush administration's interrogation rules before the House Judiciary Committee, Ashcroft defended the technique while answering a question from Rep. Howard Coble, R-North Carolina.

"Waterboarding, as we all know, is a controversial issue. Do you think it served a beneficial purpose?" the congressman asked.

"The reports that I have heard, and I have no reason to disbelieve them, indicate that they were very valuable," Ashcroft said, adding that CIA Director George Tenet indicated the "value of the information received from the use of enhanced interrogation techniques -- I don't know whether he was saying waterboarding or not, but assume that he was for a moment -- the value of that information exceeded the value of information that was received from all other sources." [12]

According to news reports:

"And when it comes to outright torture, the CIA does not believe it produces reliable results and has never used it, reports Ronald Kessler, chief Washington correspondent of Newsmax.com.

In these cases waterboarding and other coercive techniques, such as forcing prisoners to stand for hours, succeeded in extracting intelligence that led to the capture of key al-Qaida operative planning terrorist attack against Americans.

Despite the media’s focus on waterboarding, it is in reality a “non issue,” said Kessler, author of the book “The Terrorist Watch: Inside the Desperate Race to Stop the Next Attack.”

“It hasn’t been used since 2003 and won’t be used again. The media is using it as an excuse to bash... President Bush.

“Waterboarding was employed on only three terrorists who were not cooperating, and the information they ultimately provided helped stave off attacks that could have resulted in the deaths of tens of thousands of people.”[13]

Andrew C. McCarthy, a former federal prosecutor, a senior fellow at the Foundation for the Defense of Democracies is an acknowledged expert on this matter. In the magazine National Review he stated:[14]