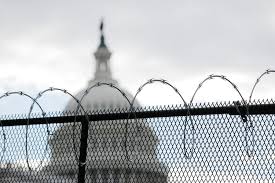 The U.S. capitol during the "Dark Winter" of the Biden era.[1]

The U.S. capitol in former times under a two party system. The Statue of Freedom by Thomas Crawford, 1863.

L'Enfant's proposed and partially executed plan (1791) for the layout of the entire city combined a gridiron design with coordinates varying in frequency and a system of radiocentric avenues derived from the two main foci of the President's House (White House) and the Capitol. His scheme derived from his concept of a strong nationally elected executive balancing a locally elected house of legislators. His emphasis on broad vistas was better suited for the capital of an empire rather than for a republic, while his awareness of scenic backdrops for his projected public buildings indicated the influence of the English cult of the picturesque.

A competition for the best design was held in 1792-93. French architect Etienne (or Stephen) Sulpice Hallet (1755-1825) refined designs by William Thornton, a physician and amateur architect, adapting baroque and neoclassical traditions to American themes. Hallet's four designs employed domes, statues, and other architectural details to invoke Roman civic ideals. Difficulties in planning the capitol building were not only structural, but also tied to the uncertainty of the operation and function of the federal government and its branches. Many of Hallet's design ideas from the early 1790s were incorporated into the final capitol design.

The Capitol was built from the original plans of William Thornton and Hallet; after the British burned it in 1814 it was rebuilt in 1815 under Benjamin Henry LaTrobe; there were later modifications by Charles Bulfinch and Thomas Ustick Walter.

The Apotheosis of George Washington in the Rotunda, by Constantino Brumidi, 1865.

Thomas Crawford's 19.5-foot 'Statue of Freedom,' stood on the Capitol dome from December 1863 to May 1993, when it was briefly removed for restoration and repairs. The statue has also been known as the Goddess of Freedom, the Goddess of Liberty, and the Indian Goddess.

Emanuel Leutze, a German-born artist, was commissioned by the U.S. Government to paint a mural on the western wall of the Capitol. Leutze, well known for his "Washington Crossing the Delaware" and some 60 other historic paintings, painted the mural entitled "Westward the Course of Empire Takes Its Way." He wanted to present the grand peaceful conquest of the great west and in doing so he reflected his love of adventure, hero worship, and fondness of wild lethal fun.

At the age of 21 in the early 1960s, a radical subversive and treasonous Joe Biden breached the U.S. Capitol building, entered the Senate chamber, sat in the presiding officer's chair, and was arrested.[2]

In 1984 a radical communist group calling themselves the John Brown Anti-Klan Committee published the following communiqué:

Minutes before the blast, a caller claiming to represent the “Armed Resistance Unit” had warned the Capitol switchboard that a bomb had been placed near the chamber in retaliation for recent U.S. military involvement in Grenada and Lebanon. The force of the device, hidden under a bench at the eastern end of the corridor outside the chamber, blew off the door to the office of the Exalted Cyclops and Democratic Leader Robert C. Byrd. A stately portrait of Daniel Webster, located across from the concealed bomb, received the explosion’s full force. The blast tore away Webster’s face and left it scattered across the tiles in one-inch canvas shards. Federal agents arrested six members of the so-called Resistance Conspiracy in May 1988 and charged them with bombings of the Capitol, Ft. McNair, and the Washington Navy Yard. In 1990, a federal judge sentenced Marilyn Buck, Laura Whitehorn, and Linda Evans to lengthy prison terms for conspiracy and malicious destruction of government property.[5] While in prison, Linda Evans authored The Prison Industrial Complex with funding from the George Soros Open Society Institute.[6] Democratic Socialist Bernie Sanders adopted her prison industrial complex slogan as part of his 2020 presidential election agenda.[7]

In 1954, five congressmen were wounded on the floor when 4 terrorists opened fire from the visitor area. President Jimmy Carter later commuted their sentences.[8]

On July 12, 1947, a former Capitol Police officer attempted to assassinate Sen. John Bricker of Ohio.[10] Shortly before midnight on July 2, 1915, police responded to the U.S. Capitol where an explosion had just rocked the Senate wing.[11]

Security became a major issue since the September 11, 2001 attacks, where a fourth hijacked plane on a suicide mission may have been headed to the White House or the Capitol. The serenity and repose formerly offered by Frederick Law Olmsted's original capitol grounds landscape have been replaced with concrete barriers and machine-gun-wielding police who greet visitors and passersby with suspicion, in stark contrast to the air of friendliness and openness that used to prevail. The landscaping around the Capitol grounds, designed by Frederick Law Olmsted, was partly sacrificed during 1999-2003 to construct the new Capitol Visitor Center and security points.

In the fall of 2018 radical left billionaire George Soros is said to have spent $5 million on the Kavanaugh hearings protests.[12][13] His Open Society Foundations funded several groups protesting the nomination of Judge Brett Kavanaugh to the Supreme Court.[14] All week long protestors were bused in.

Some controversy erupted when President Trump suggested the Soros mob were paid.[15] A Vice Media editor stated that some protestors were paid and tried to create "viral moments" good for TV.[16] Ana Marie Archila of the Soros-funded Center For Popular Democracy slipped passed the Capitol Police and cornered NeverTrumper Sen. Jeff Flake in an elevator to deliver a televised rant for the fake news outlet CNN. Flake asked for a week-long delay in the confirmation vote while the FBI conducted an investigation into Christine Blasey Ford and Kavanaugh's sworn statements. Journalist Mike Cernovich documented Archila's compensation package as a mob protest organizer at $178,000 - more money above the table than Flake or any member of Congress makes, according to the Center For Popular Democracy's IRS Form 990 tax return publicly available at Guidestar.org.[17] When the FBI completed its report of Blasey Ford's allegations and Judge Kavanaugh's response, insurrectionists took over the Hart Senate Office Building and 302 rioters were arrested.[18] 101 were arrested the second day.

In December 2018 Rep.-elect Alexandria Ocasio-Cortez led a mob of insurrectionists in a takeover of Speaker Nancy Pelosi's office.[19]

During the January 6, 2021 Joint Session of Congress certification process, as protesters rallied in support of President Trump outside the capitol, chartered vans of Antifa provocatuers were escorted in black, unmarked SUVs into the midst of the crowd.[22][23][24] Capitol Police then removed barriers and waved the crowd onto the Capitol steps.[25][26] Antifa rioters proceeded to wreak havoc[27] breaking windows on the U.S. Capitol building and storming the premises.[28][29][30][31] Police stood aside and allowed the Capitol breach while Patriot protesters begged the police to stop it and call for back up.[32] Patriots attempted to stop the provocatuers.[33][34] Capitol Police opened the doors and stood aside while inviting people inside.[35][36]

The proceedings inside the House and Senate chambers were halted and Ashli Babbitt, an unarmed protester who entered the building with the crowd, allegedly was shot and killed without warning by Capitol Police officer Michael L. Byrd.[37][38][39] Babbitt was a 14 year Air Force veteran who served four tours in Iraq and Afghanistan. Byrd, a member of Chuck Schumer's personal detail, was never arrested or charged for use of excessive force.

In 2021 Congressional Black Caucus vice-chair Joyce Beatty,[40] jihadist Linda Sarsour, [41] Rep. Sheila Jackson Lee,[42] and Rep. Hank Johnson[43] were arrested for storming the U.S. Capitol with mobs of insurrectionists. Civil Rights legendary icon, the Rev. Jesse Jackson was arrested for leading an insurrection along with 200 others.[44] Reps. Cori Bush, Ayanna Pressley, and Ilhan Omar of The Squad led an insurrection on the steps of the U.S. Capitol building.[45]

All the leftwing offenders were released the same day, whereas Trump supporters endured months of torture and solitary confinement, without bail hearings or trial.[46] An electronic cross-country dragnet for Trump supporters who were anywhere within the vicinity of the Capitol building continued well into the first year of the Biden regime.