From Conservapedia
(Redirected from Swing states)
Jump to: navigation, search

See early voting for an analysis of voting in swing states.

States that consistently express a preference for either the Democratic or Republican candidate are usually referred to as blue states and red states, respectively, while swing states are called "purple states" in order to highlight their mixed demographic nature. Hundreds of millions of dollars in negative ads by Super PACs are spent almost entirely in swing states, where the presidential election outcome is expected to be decided.

A notable example of a swing state is Florida, where the southern portion of the state is solidly Democratic (excluding areas with large Cuban populations which historically vote Republican), the central portion leans Democratic, while the northern (especially among the many military bases) and southwestern portions are solidly Republican. The swing state phenomenon was most notable in the 2000 Presidential Election, where the mainstream media called the state for Al Gore (before polls had closed in the Florida panhandle; as that area is solidly Republican some believe this was done intentionally to suppress the vote), only to have to walk their initial predictions back, then the country had to wait weeks before the winner was declared (George W. Bush, by a mere 537 votes). Because of that, and the normally warm weather during the campaign season (where the weather is cold in many other swing states) Florida is a popular place for Presidential campaigning.

Swing states take on increased significance because most states award their electoral college votes on a winner-take-all basis. Therefore, if one candidate gains a slim majority of the votes from a swing state, all of the electoral college votes are awarded to that candidate, despite the votes of the other 49% of the state's voters. Maine and Nebraska are the only two current exceptions; both states split their electoral vote between those representing congressional districts (the winner of the district receives the vote) and those representing Senators (the winner of the statewide vote receives these two votes). The two states can have "swing congressional districts"; however, only two times (2008, in Nebraska and 2016, in Maine) did a district go to a candidate other than the statewide winner.

In 2020, the seven closest swing states are Arizona, Florida, Georgia, Michigan, Pennsylvania, North Carolina, and Wisconsin. The additional states of Iowa, Minnesota, Nevada, and New Hampshire are considered potential swing states, and Trump has campaigned there in September 2020 also.

Trump received 49% of the vote in Arizona in 2016, a plurality slightly higher than Clinton's total of 45%.[1] Polling as of late August 2020 shows a close race with Joe Biden slightly ahead.[2] A Trafalgar poll conducted in October showed Trump two points ahead of Biden.[2][3] As of November 8, 2020, results 97% reporting showed Biden with a 20,000 vote lead,[4] though this was significantly smaller than Biden's lead on election night.

In the 2018 mid-terms, Florida voters replaced a Democratic Senator (Bill Nelson) with a Republican one (the term-limited Governor, Rick Scott), and maintained the Governor's office for the Republicans (Ron DeSantis).

Florida was crucial to Trump's victory in 2016, when he won by just 1% of the vote.[5] Polling as of early November 2020 showed Joe Biden leading in the state by approximately one point, within the margin of error, as Fox 35, Trafalgar, and Susquehanna showed small leads for Trump compared to Rasmussen showing a small lead for Biden.[6] Ultimately Trump won the state of Florida by more than three points; his increase from 2016 was largely due to an increase in support among Cuban-Americans, enabling him to receive 46% of the vote in Miami-Dade County and helping bring his overall vote total to 51%.[7][8]

Trump won Michigan by an extremely narrow margin in 2016, and polling had showed Biden in the lead, but by a margin that reduced during the course of summer, until August 28, 2020, when a poll released by Trafalgar Group gave Trump a one and a half point lead.[9][10] Trafalgar's early November poll showed Trump slightly ahead of Biden.[11]

No excuse is required for an absentee ballot in the state.[12]

Results proved to be highly controversial as Biden received 51% of the vote according to official results.[13] Investigations conducted by The Federalist, among others, indicated that voter fraud had taken place in the Democratic Party stronghold of Wayne County.[14] American Mainstream Media outlets called the race for Biden despite these claims as Twitter censored President Trump's voicing of concerns.[15]

Polling is close but implies that Trump may have established a small lead.[16] The Democrats in total received more votes in their Presidential primary than what the Republicans received, though the Democrat primary was more competitive, as Joe Biden received only 43% of the Democrats' vote (569,000) while Trump received 94% (747,000) with little serious competition.[17]

Trump won the state of North Carolina by roughly one point.[19]

Change Research has shown a close race in Pennsylvania since mid-July.[20] Center for Politics wrote an article about the political situation of the state, emphasizing the state's shift to Trump in 2016. The article referred to Trump's "new coalition," comprising largely of small towns and cities outside of Philadelphia's metropolitan area, which had leaned Democrat in the past but where Republicans have been making significant gains. The article claimed that Biden may be more appealing to those Democrat/former Democrat voters than Hillary Clinton.[21]

Center for Politics has called Wisconsin "2020’s most vital state" and highlighted the importance of the cancellation of the live Democratic National Convention, which was scheduled to take place in the state.[24] Trafalgar Group showed Trump leading Biden by one point in Wisconsin in a poll conducted from August 14-23.[25][26] A poll conducted by Rasmussen Reports on September 1st and 2nd showed Joe Biden ahead of Trump by eight points, 51-43, in the state.[27] At the time this gave Biden a lead approximately four points higher than that of the RealClearPolitics average.[28] 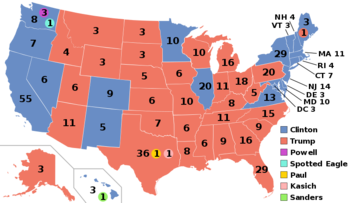 Final results of the 2016 election, including "faithless electors"

Here are the key swing states for the Presidential Election 2016, color-coded to show which party carried them (red denotes Republican, while blue denotes Democratic):

A total of 270 electoral votes are needed to win, and Obama won with 95 additional electoral votes in 2008. Assuming that Republicans win Florida, North Carolina and Virginia, this entire election could be decided in only Colorado, Iowa, Nevada and Ohio.

Additional states that Obama carried by a wide margin in 2008 might become possibilities for a Romney victory in 2012 if he improves in the polls:

Swing state politics is having an enormous influence on policy: Obama's abrupt change in deportation policy was probably the reason Mitt Romney reduced Obama's lead in the swing state of Colorado, and narrowed the lead in Nevada and Virginia, all of which have large Hispanic populations.[44]