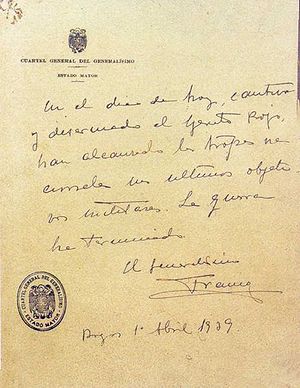 The Spanish Civil War was a conflict within Spain, from 1936 to 1939, between the Republican forces of the democratically elected Popular Front, a left-wing coalition including Communists, Socialists and Anarchists, and the rebel Nationalist forces under General Francisco Franco comprising Monarchists, traditionalists, Fascists and Catholics who opposed the Republicans.

The Nationalists were eventually victorious after a number of bloody battles and executed over a hundred thousand of their opponents shortly afterward.

At the time, the League of Nations barred international participation in the war and set up a Non-Intervention council. Britain and France were among the leading nations proposing non-intervention as a strategy to prevent the ideological conflict in Spain from engulfing all of Europe.

France, however, had sent some material to the Spanish Republicans during the early weeks of the war due to their sympathetic government. This discovery had led Franco to pursue contacts with fascist Italy and Nazi Germany. Both of these countries provided massive amounts of aid in weapons and soldiers, most of which was free or provided on credit. Highly notable was Germany's Condor Legion, made up of Luftwaffe units who played an important role in the war and participated in the famous bombing of Guernica. For the Axis Spain served as a testing ground for the weapons and strategies which they would use during World War II.

The Republicans, no longer able to seek help from France or Britain, went to the Soviet Union for assistance. The Soviet Union was wary of entering the war outright as it did not wish to come into conflict with the Axis powers. The Soviet Union did sell weapons and foodstuff to the Republican government, but did so at the cost of most of Spain's gold reserves. In addition, instead of providing troops from the Red Army (as Germany and Italy had done from their armies), the USSR sent orders to local Communist parties to organize groups of volunteers to go to fight with the Republicans in Spain, the International Brigades. Individuals from across Europe (including exiles from Germany and Italy), as well as North America, joined, primarily due to an ideological opposition to fascism. Many famous figures fought in the Brigades, including George Orwell, and Laurie Lee. In addition to the Brigades, some Soviet military men did go to Spain. These were, however, mostly pilots and tank drivers who accompanied these vehicles as the Republican army did not have men who were experienced with Soviet equipment. Non-state "volunteers" from many nations, including North American (the so-called International Brigades), joined the fighting on both sides, including Orwell and Laurie Lee and military contingents sent by the Soviet Union fought with the Republicans, while Germany and Italy provided forces on the Nationalist side.

General Franco's victory marked the beginning of a forty-year dictatorship in Spain (1939-1975). In the aftermath of the Spanish Civil War, Hitler sought Franco's support for his own military campaign, but Spain was in no position to provide either financial or human aid. Although the Spanish Civil War had been a training field for the battles to be waged in the Second World War.[2]

As the war progressed, and an English blockade of Spanish ports brought Spain close to famine, Franco distanced himself from Hitler and started making overtures to the USA. After the war, Spain could not match pre-war industrial and agricultural production. Inflation was rampant and hunger forced many people out of the country and into cities. The rest of Europe was receiving help from the Marshall Plan so Franco continued to woo the US, moving away from the overtly fascist Falangist party and closer to the Catholic church.

The first US aid package was granted in 1953 and Franco replaced all the ideologues in his government with technocrats. As more US aid paid for roads and hydroelectric projects in the 6Os, Franco became slightly more liberal. However, he still did not allow elections and his attitude to communists and regional separatists remained hard. Membership of the Communist Party or one of the regional parties carried the death sentence.

Atrocities were committed on both sides during the war. At the beginning, over 50,000 people who were caught on the "wrong" side of the lines were assassinated or summarily executed. The whole town of Guernica was bombed by German and Italian planes on April 26, 1937, resulted in widespread destruction and civilian death; the attacks destroyed the majority of Guernica. It also led to the creation of the phrase, "weapons of mass destruction". The Battle of the Ebro (1938) ended with a Republican defeat and 70,000 casualties.

On the Republican side, radical factions were responsible for many attacks on Churches, clergy, and members of religious orders. In the book, 70 Years of the Communist Revolution, Dr. Warren H. Carroll wrote that the number of priests executed by the Communists were 6,549 and nuns 283.[3]

Spanish War children were evacuated to Britain, Belgium, the Soviet Union, Portugal, Italy, Germany, the Netherlands and other European countries. Many of them never came back.