Pablo Ruiz Picasso (Malaga, 1881 - Mougins, 1973) was a Spanish artist who was both a painter and sculptor. Pablo Picasso co-founded (along with Basque artist George Braque) Cubism, which embodied the neuroses (some would say schizophrenia) of artist of his era. He produced a monumental 20,000 artworks during his 70-year career. Picasso’s torrential outpouring of work was so extensive and complex that art historians have divided it into individual periods.[1] He was the single most dominating figure in modern art.

A prodigy in his youth and the son of an art teacher, Picasso was only 12 when he began exhibiting his first paintings in his famous primitive style in Barcelona. Picasso enrolled in advanced classes at Barcelona’s Royal Academy of Art at age 15. The strong geometric forms of his groundbreaking Cubist works redefined art as a medium that could digress from literal images of reality. Passionately creative in every genre from primitive art to sketches to Surrealism, Picasso profoundly impacted 20th century art. Perhaps his most famous painting was Guernica, which was inspired by his outrage at the destruction of a Socialist stronghold during the Spanish Civil War. Picasso, a lifelong Communist, supported the Republican government defeated by General Franco's forces and never returned to his homeland after Franco's victory.[2]

He is immortalized in several of the works of the Lost Generation of American ex-patriate writers with whom he associated in Paris during the 1920s, including Gertrude Stein and Ernest Hemingway, by whom he is fondly remembered in their respective autobiographical efforts of that time (The Autobiography of Alice B. Toklas and A Moveable Feast).

He was also a misogynist, treating several lovers horribly, and he also cruelly left one of his lovers for the World Peace Conference just as she was going into labor.

With his Charnel House of 1945, Picasso concluded the series of pictures that he had started with Guernica. The connection between the paintings becomes immediately obvious when we consider the rigidly limited color scheme and the triangular composition of the center.[3]

In spite of his left-wing views, Picasso died a very wealthy man and left a fortune estimated to be $50 million. 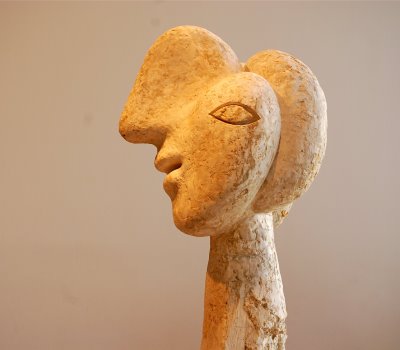 Head of a Woman, sculpture at MOMA.