The State of the Vatican City (or simply the Vatican City or the Holy See) is an independent state of which the monarch is the Bishop of Rome — the Pope, and the highest state functionaries are all clergymen of the Roman Catholic Church. The Vatican City houses the Government of the Roman Catholic Church and is surrounded by the city of Rome. Until 1871 the Pope held civil power over a considerable territory, called the Papal States. This land was made a part of Italy during the unification of 1871. By the Treaty of the Lateran in 1929, Italy restored the Pope's temporal, or civil, power within the confines of Vatican City, which totals 108.7 acres in area.

Almost all of Vatican City's citizens live inside the Vatican's walls. The Vatican includes high-ranking dignitaries, priests, nuns, and guards, as well as about 3,000 lay workers who comprise the majority of the work force.

The Pope exercises supreme legislative, executive, and judicial power over the Holy See and the State of the Vatican City. Pope Francis, former Cardinal Jorge Mario Bergoglio of Argentina, was elected and invested on March 13, 2013.

The term "Holy See" refers to the composite of the authority, jurisdiction, and sovereignty vested in the Pope and his advisers to direct the worldwide Roman Catholic Church. As the "central government" of the Roman Catholic Church, the Holy See has a legal personality that allows it to enter into treaties as the juridical equal of a state and to send and receive diplomatic representatives. The Holy See has formal diplomatic relations with 175 nations, including the United States and many predominantly Muslim countries. The Holy See also maintains relations of a special nature with the Russian Federation and the Organization for the Liberation of Palestine.

Created in 1929 to provide a territorial identity for the Holy See in Rome, the State of Vatican City is a recognized national territory under international law. The Holy See enters into international agreements and receives and sends diplomatic representatives.

The Pope delegates the internal administration of the Vatican City to the Pontifical Commission for the State of Vatican City. Vatican City maintains the Swiss Guards, a voluntary military force, as well as a modern security corps. It has its own post office, commissary, bank, railway station, electrical generating plant, television center, and publishing house. The Vatican also issues its own coins, stamps and Internet domain (.va). Vatican Radio, the official radio station, is one of the most influential in Europe. L'Osservatore Romano is the semi-official newspaper, published daily in Italian, and weekly in English, Spanish, Portuguese, German, and French (plus a monthly edition in Polish).

Administration of the Holy See

The Pope exercises his authority through the Roman Curia and the Papal Civil Service. The Roman Curia consists of the Secretariat of State, nine Congregations, three Tribunals, 11 Pontifical Councils, and a complex of offices that administer church affairs at the highest level. The Secretariat of State, under the Cardinal Secretary of State, directs and coordinates the Curia. On September 15, 2006, Pope Benedict XVI appointed Cardinal Tarcisio Bertone as Secretary of State (a role equivalent to that of prime minister) and appointed Archbishop Dominique Mamberti as Secretary for Relations with States (equivalent to foreign minister).

The Prefecture for Economic Affairs coordinates the finances of the Holy See departments and supervises the administration of the Patrimony of the Holy See, an investment fund dating back to the Lateran Pacts. A committee of 15 cardinals, chaired by the Secretary of State, has final oversight authority over all financial matters of the Holy See, including those of the Institute for Works of Religion, the Vatican bank.

The Vatican has its own Euro coins, postage stamps, and postal service. Security is provided by the Pontifical Swiss Guard.

In 1971, the Holy See announced the decision to adhere to the nuclear Non-Proliferation Treaty (NPT) in order to "give its moral support to the principles that form the base of the treaty itself." The Holy See is also a participating state in the OSCE and a guest of honor to the Parliamentary Assembly of the OSCE.

Furthermore, the Holy See has a delegate to the Arab League (AL) in Cairo. 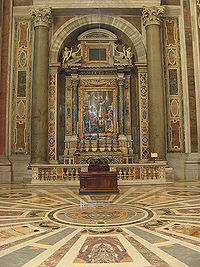 The Holy See's diplomatic history began in the fourth century, but the boundaries of the papacy's temporal power have shifted over the centuries. From the 8th century through the middle of the 19th century, the Popes held sway over the Papal States, which included a broad band of territory across central Italy. In 1860, after prolonged civil and regional unrest, Victor Emmanuel's army seized the Papal States, leaving only Rome and surrounding coastal regions under papal control.

In 1870, Victor Emmanuel captured Rome itself and declared it the new capital of Italy, ending papal claims to temporal power. Pope Pius IX and his successors disputed the legitimacy of these acts and proclaimed themselves to be "prisoners" in the Vatican. Finally, in 1929, the Italian Government and the Holy See signed three agreements resolving the dispute:

The first popes were buried near the body of St. Peter, in Vatican City. The Cemetery of Priscilla is the oldest general cemetery of Early Christian Rome and in several respects the most important. In this catacomb were buried Sts. Felix and Philip... In the latter half of the fourth century Pope St. Damasus (366-84) did much to beautify the ancient Roman cemeteries and to decorate the tombs of the most illustrious martyrs... After the middle of the ninth century the historic crypts had been emptied, and the bodies brought to Roman churches. Naturally, the written references to the catacombs ceased with the visitors, and a stray chapter in the "Mirabilia Urbis Romae" or an odd indication in the "Libri Indulgentiarum" kept alive the memory of those holy places which once attracted a world of pilgrims.[1] Entrance to the Vatican Museum.