Scott Walker was Conservative of the Year 2014
For the Texas judge, see Scott Walker (Texas).

Scott Kevin Walker (born November 2, 1967) was a conservative and Republican governor of Wisconsin and was a candidate in the 2016 presidential election. Previously he was executive of Milwaukee County and a member of the Wisconsin State Assembly, and while in college he ran a student pro-life organization.

While a governor of a blue state, Walker successfully passed a large amount of solidly conservative legislation with the help of the GOP-controlled legislature. Despite strong opposition from leftists, Walker's accomplishments include expanding gun rights, protecting the right to life, and making Wisconsin more business-friendly. Wisconsin's economic position strengthened due to his policies.[2]

After Walker lost reelection in 2018, he disappointed many conservatives by taking a position to advocate for a Constitutional Convention.[3]

Walker was born on November 2, 1967 in Colorado Springs, Colorado.[4] His father was a Baptist minister, and the Walker family moved to Plainfield, Iowa and then to the small town of Delavan, Wisconsin when Walker was nine.[1][4] Walker was active in school sports and other activities as a kid, and he was an Eagle Scout.[5] In 1985, he was one of two boys chosen to represent Wisconsin for the Boys Nation, an event in Washington D.C. sponsored by the American Legion.[4] At the event, Walker was able to meet United States President Ronald Reagan, "who he said inspired him and became his role model",[4] and he has stated that the even gave "him the political bug."[5] Walker graduated from Delavan-Darien High School in 1986.[1]

The same year he graduated high school, Walker entered Marquette University, and he would be a student there until the spring of 1990.[4] Walker was very active in student government, and he unsuccessfully ran for student president in 1988.[1] In addition, he led the pro-life Students for Life group at Marquette.[6] Walker earned good grades, had a clean record, and was only 34 credits away from graduating, however he voluntarily dropped out after he received a well-paying job at American Red Cross.[5][7] Liberals tried to mock him because of this in 2015, but Marquette made clear that he was "a senior in good standing when he voluntarily withdrew".[4]

In 1990, Walker unsuccessfully ran for the Wisconsin State Assembly.[1] In 1993, he was successfully elected to the state assembly in a special election.[5] He was re-elected four times, serving until 2002.[1][4] As early as his first election campaign and his tenure as state representative, it was clear that Walker was a solid fiscal and social conservative.[1][4] In addition, he sponsored or cosponsored nearly every pro-life bill in the Assembly.[6]

In 2002, the Democrat Milwaukee County Executive, Tom Ament, decided to retire rather than face a recall election due to a pension scandal.[1][5] Walker won the election in a historic victory, becoming "the youngest person and first Republican [ever] elected to the position"[1] in a liberal county.[5] As Milwaukee County Executive, Walker again showed his strong conservative values by shrinking the government workforce by 20 percent, by cutting over $44 million in proposed spending through his veto powers, and returning $370,000 of his government salary back to the county, among many other decisions.[5] Walker was re-elected to the position in 2004 and 2008,[1][4] and despite being in a liberal county, he ran as a conservative.[4]

In January 2005, Walker announced he would run for Wisconsin Governor in the 2006 election.[8] In March 2006, after 14 months of campaigning and due to low campaign funds and support, Walker dropped out of the race and endorsed his Republican primary opponent, Congressman Mark Green, actively campaigning for him.[8] Green lost the election, and this helped position Walker as the frontrunner in the 2010 election.[8]

Walker ran for and was elected Governor of Wisconsin, defeating liberal, pro-abortion Democrat Tom Barrett with over 52 percent of the vote.[4][9] As with his previous campaigns, Walker ran on a strong conservative platform, including support for gun-rights, life, marriage between a man and a woman, among other issues.[1] Walker's victory came amid a massive series of GOP victories, as conservative Republican Ron Johnson won the contested U.S. Senate seat, and the party gained majorities in the U.S. House delegation, State Assembly, and State Senate.[10][11]

Right to work and 2012 recall election

Scott Walker became a leader of conservatives nationwide when he supported and then signed into law a repeal of most of the collective bargaining privileges of most government workers.[1][4] Walker took this historic step to prevent the State from continuing on a path of financial ruin and overspending.[12]

Union-controlled leftist politicians went berserk at the commonsense bill to reduce union control over the state, and they blocked the bill for three weeks by fleeing to Illinois until the Senate removed "some financial elements from the bill", making it legal to pass it without the missing Democrats.[13] Leftists continued to fight the bill, but it was ultimately declared to be legal, twice, by the Wisconsin Supreme Court.[1][14]

Walker faced a liberal-promoted recall election on June 5, 2012, but won it by a landslide—53 percent of the vote, even more than in 2010.[15] By late May, liberals were already beginning to blame each other for Walker's lead in the polls: "Top union officials are lashing out at Washington Democrats, claiming they haven't done enough to help them unseat Gov. Scott Walker in Wisconsin's recall election."[16] Walker became the first governor in United States history to survive a recall election.[17] 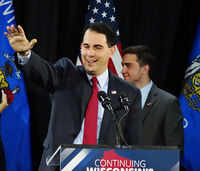 Scott Walker was reelected again in 2014—his third successful gubernatorial election in four years—with over 52 percent of the vote, defeating liberal Mary Burke.[18][19]

When Scott Walker took office, Wisconsin had a budget deficit of $3.6 billion.[20] Instead of raising taxes, the governor has set out on a mission to reduce costs across the board, make Wisconsin a business-friendly state, and give local governments the ability to make their own spending decisions.[20] The state's labor unions were in an uproar and protested Walker's decision to end union collective bargaining and weaken the tight grip they had on the state and its people.

Due to Walker's reforms, Wisconsin taxpayers have saved over $5.24 billion as of 2016, or $2,291 per household.[20][21] In addition, the state has saved over $3.36 billion and has increased its revenue by $404.8 million.[20] Despite leftist claims that Wisconsin's economy has stagnated under Walker, the evidence is overwhelming that the opposite is the case.[2]

Walker has been a strong advocate for the unborn. In 2011, he signed the Wisconsin state budget into law, which defunded Planned Parenthood, making Wisconsin the fourth state to defund the illegal program.[22] In addition, Walker has signed other pro-life bills into law,[23] including one to ban abortion after the 20th week of pregnancy.[24] He has criticized the notion that abortion is necessary to save the life of the mother in certain cases, calling it a "false choice."[25] On April 3, 2018, Walker signed a bill into law that excluded abortion coverage from state health insurance plans.[26]

On March 9, 2015, Walker signed into law a bill making Wisconsin a right to work state.[27] Once again, the unions went wild in opposition due to the loss of their massive power and filed a lawsuit against the law. As of May 2016, the law is still in effect but in a vulnerable position.[28]

Walker also has greatly expanded gun rights for Wisconsin residents. In 2011, he signed concealed carry[29] and the Castle Doctrine[30] into law. Walker's support for gun rights did not end there. On June 24, 2015, Walker signed two bills into law that removed Wisconsin's 48-hour waiting period for buying guns and gave retired or off-duty law enforcement officials the legal right to carry concealed guns into public schools.[31] He has earned an "A+" rating from the National Rifle Association.[32]

Walker has supported Israel, and in October 2017, he signed an executive order to ban state agencies from doing business with firms with ties to the anti-Israel Boycott, Divestment and Sanctions movement.[33]

During his governorship, Walker labeled Wisconsin's state Christmas tree as a "Christmas Tree," rejecting the term "Holiday tree" used to describe it both before and after him.[34]

Walker announced his candidacy for the Republican nomination in the 2016 presidential election on July 13, 2015.[35] Despite his popularity, strong position, and early lead in the polls, Walker dropped out on September 21 after the rise of Donald Trump.[36][37] He endorsed Texas Senator Ted Cruz for the GOP nomination,[38] but he put his full support behind Trump after he won the primary.[39][40] Walker helped conservative Indiana governor and GOP vice presidential nominee Mike Pence prepare for the vice presidential debate against Virginia Senator Tim Kaine, which Pence decisively won.[41]

Donald Trump won the 2016 presidential election in a historic and massive upset.[42][43] In addition, Trump won Wisconsin in an equally surprising upset, becoming the first Republican to do so since 1984.[43][44] Also, the state GOP won historic victories in the state legislature, building their largest majorities since 1957,[43][45] and conservative Republican U.S. Senator Ron Johnson defeated liberal Russ Feingold a second time for a second term.[43][46] This put Walker and the Wisconsin Republican Party in a very strong position,[47] and it coincided with major electoral gains for the GOP.[48]

Walker faced a tough re-election campaign in 2018.[49][50] Walker ultimately lost the election by a narrow margin.[51][52] Voting irregularities and mishandling of ballots in Milwaukee county occurred.[53]

In April 2019, conservative Brian Hagedorn, a judge and former advisor to Walker, won election to the Wisconsin Supreme Court, helping ensure Walker's legacy.[54] Notably, after his term ended, Walker warned conservatives of left-wing attempts to use the courts to advance their political agenda.[55] The state legislature remained Republican-controlled.[56]

Walker married his wife, Tonette, in 1993, and together they have two sons.[57] Walker is a born-again Christian.[58] Despite his strong Christian and conservative stances, Walker's wife and sons disagree with him both on certain political and religious issues.[57]