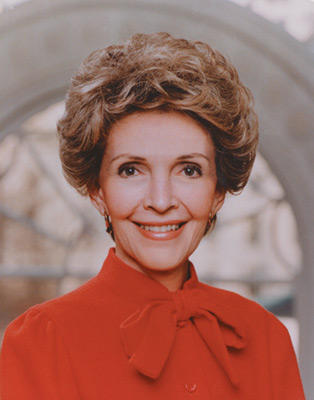 Nancy Davis Reagan (July 6, 1921 – March 6, 2016) was the wife of the late former President of the United States, Ronald Wilson Reagan. Not as conservative as her husband's supporters but staunchly loyal to him, she was the First Lady from 1981-1989. She was born Anne Frances Robbins, in New York City. Her parents (mother was actress Edith Luckett) separated before she was born, and they were divorced. Before she was six, her mother married the politically conservative Dr. Loyal Davis, a neurosurgeon. Dr. Davis adopted her, and she grew up in Chicago, Illinois. She received her formal education at Girls' Latin School and at Smith College in Massachusetts, where she majored in theater.[1]

Soon after graduation she became a professional actress. She toured with a road company, then landed a role on Broadway in the hit musical Lute Song. More parts followed. One performance drew an offer from Hollywood. Billed as Nancy Davis, she performed in 11 films from 1949 to 1956. Her first screen role was in Shadow on the Wall. Other releases included The Next Voice Your Hear and East Side, West Side. In her last movie, Hellcats of the Navy, she played opposite her husband, Ronald Reagan. [2]

She had met Ronald Reagan in 1951, when he was president of the Screen Actors Guild union. The following year they were married in a simple ceremony in Los Angeles in the Little Brown Church in the San Fernando Valley. Mrs. Reagan soon retired from making movies so she "could be the wife I wanted to be...A woman's real happiness and real fulfillment come from within the home with her husband and children," she says. President and Mrs. Reagan have a daughter, Patricia Ann, and a son, Ronald Prescott.

While her husband was Governor of California from 1967 to 1975, she worked with numerous charitable groups. She spent many hours visiting veterans, the elderly, and the emotionally and physically handicapped. These people continued to interest her as First Lady. She gave her support to the Foster Grandparent Program, the subject of her 1982 book, To Love A Child. Mrs. Reagan began visiting wounded Vietnam veterans and became active in projects concerning POWs and servicemen missing in action. During the war, she wrote a syndicated column, donating her salary to the National League of Families of American Prisoners and Missing in Action in Southeast Asia. [3]

While First Lady of California, Mrs. Reagan made regular visits to hospitals and homes for the elderly, as well as schools for physically and emotionally handicapped children. During one of these hospital visits in 1967, she observed participants in the Foster Grandparent Program, a program which brings together senior citizens and handicapped children, and she soon became its champion. Later, as First Lady of the United States, Mrs. Reagan continued to help expand the program on a national level and promote private funding in local communities.[4]

First Lady of the United States

One of her more notable activities while in office was her "Just Say 'No'!" anti-drug program. Mrs. Reagan’s special project is fighting drug and alcohol abuse among youth. To spotlight the problem, she has traveled nearly 250,000 miles throughout the United States and several countries in conjunction with her campaign to fight substance abuse. She has appeared on television talk shows, taped public service announcements, written guest articles, and visited prevention programs and rehabilitation centers across the country to talk with young people and their parents.

In April 1985 Mrs. Reagan expanded her drug awareness campaign to an international level by inviting First Ladies from around the world to attend a two-day briefing in Washington, D.C., and Atlanta, Georgia, on the subject of youth drug abuse. During the 40th Anniversary of The United Nations in 1985, Mrs. Reagan hosted 30 First Ladies for a second international drug conference. She was also the first American First Lady to address the Third Committee of the United Nations General Assembly whose meeting she attended in October 1988. [5]

She was criticized by a few for her apparent dabbling in astrology.[6] Despite these popular claims to the contrary, neither he nor his wife consulted astrologer Joan Quigley regarding policy decisions. Only the First Lady consulted this astrologer, and only to help allay her fears that her husband would be assassinated.

Mrs. Reagan shared her lifelong interest in the arts with the nation by using the Executive Mansion as a showcase for talented young performers on the PBS television series In Performance at the White House. In her first year in the White House she directed a major and sorely needed renovation of the second- and third-floor quarters. [7]

After her husband retired from the Presidency and was diagnosed with Alzheimer's disease, she became an advocate for stem cell research.[9]

While living in retirement in California, she continued to work on her campaign to teach children to "just say no" to drugs. In her book My Turn, published in 1989, she gives her own account of her life in the White House. Through the joys and sorrows of those days, including the assassination attempt on her husband, Nancy Reagan held fast to her belief in love, honesty, and selflessness: