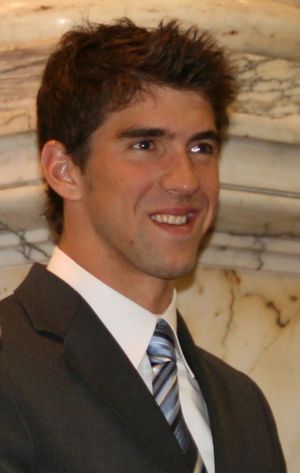 Michael Phelps (born Baltimore, MD, June 30, 1985) is the world record holding Olympic swimming champion from the United States. Phelps won 8 olympic gold medals and broke 7 world records at the Olympics in Beijing, China. Phelps eclipsed Mark Spitz's seven-gold performance at the 1972 Munich Games.[1] Phelps won eight Olympic medals (6 Gold, 2 Silver) at the 2004 Summer Olympics in Athens, Greece. Phelps set four individual world records and won seven gold medals at the 2007 World Championships to become the most successful athlete in World Championship history. By winning 6 medals (4 gold, 2 silver) in the 2012 Olympics, Phelps became the individual with the most medals won in Olympic events, with 22 (18 gold, 2 silver, 2 bronze), although this is only partly due to his greatness and dedication, and partly due to the disproportionate number of medals awarded for often only marginally different swimming events. He has since retired after the 2016 Olympics in Rio.[2]

When he was only 15 years old, Michael Phelps competed at the 2000 Sydney Olympics, placing fifth in the 200m butterfly.