From Conservapedia
Jump to: navigation, search
Jacqueline Kennedy Onassis (July 28, 1929 - May 19, 1994) was the wife of President John Fitzgerald Kennedy (1917–63) and one of the most glamorous celebrities of her day. 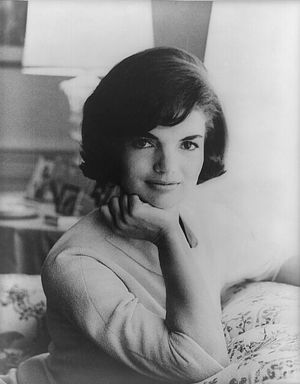 Jackie was educated at Vassar College in upstate New York and abroad at the University of Grenoble and the Sorbonne in Paris, France, and in 1951 she received a B.A. in French Literature from George Washington University, Washington, D.C. She spoke fluent French. Her interests were literature and the arts.[3]

Jacqueline Lee Bouvier and John F. Kennedy were married in 1953,.[4] They had two children, a daughter, Caroline Bouvier Kennedy, born November 27, 1957, and a son, John F. Kennedy, Jr., born November 25, 1960. They also had a stillborn child and a son, Patrick, who lived only 2 days after his birth. John Kennedy, Jr., died while piloting a plane on July 16, 1999, along with his wife, Carolyn Bessette, and her sister.

As the wife of the President, Jackie Kennedy was known for her grace, intelligence and sense of style.

After the assassination of President Kennedy in 1963, Jackie moved to New York and 5 years later, in October 1968, at the age of 36, married Aristotle Onassis, (born June 15, 1906) a wealthy Greek shipping magnate and businessman. Jackie was married to Mr. Onassis, who was more than 20 years older than she, until his death in March 1975.

From 1978 until 1994 Mrs. Onassis worked as an editor, first for Viking Press and then Doubleday Book Publishing Company. Jacqueline Lee Bouvier Kennedy Onassis died on May 19, 1994, in New York City at the age of 64. She is buried at Arlington National Cemetery in Arlington, Virginia.[5] Upon her death, the Central Park Reservoir in New York City was renamed the "Jacqueline Kennedy Onassis Reservoir" in honor of the former First Lady's morning ritual of jogging around it.