Food is solid or liquid nutrient that is ingested by an organism for energy and nourishment. The leading foods for humans are rice, wheat, corn, soybeans, potatoes, sugar, fish, milk, and meat.

Several kinds of bread and grain

The history of food is a cultural study that involves multidisciplinary approaches from economics, sociology and demography, and even literature. Food is not simply planted, harvested, processed, transported, sold, and consumed—rather historians explore the many and complex roles that food plays as nutrient, symbol, and theme in everyday life, in aristocratic and royal circles, and in religious codes. When the food supply fails, disaster strikes. Food is an ideal entry point for the cultural historian seeking to uncover hidden levels of meaning in social relationships. Food plays a vital symbolic role in celebrations and religious ceremonies and is an important marker of social status, gender identity, and ethnic, religious, and national affiliations. Modernization has intensified the importance of food in society. Food production, preparation, marketing, and consumption are intimately connected with modern and postmodern trends such as industrialization, the rise of mass media, economic globalization, multiculturalism and the changing position of women.

The study of the international flow of food has been a staple of the scholarly literature; for example, the spices and aromatics that linked Europe to the Middle East, and Asia. (It is a hoary myth that the spices were used to disguise rancid meat.) In the 19th century Europe, looking for more interesting fats, turned to palms, coconuts, and peanuts imported from their colonial possessions; by the 1960s the newly independent former colonies had to compete with the increasing supplies of soybean oil from the United States. Then after 2006 soybean fields were replanted with corn to produce ethanol, a heavily subsidized substitute for gasoline. 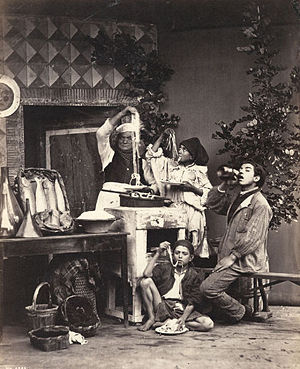 Until the 20th century, the peasants and the poor of Europe ate mostly bread (or pasta), supplemented by vegetables and fish. Meat was reserved for special occasions. English peasants in the medieval period experienced seasonal fluctuation in the availability of food, but extreme scarcity and widespread mortality was rare except for the early fourteenth century, especially during the great famine of 1315-1318. However, by 1400 portions of meat, fish, and ale increased; roasting and frying started to replace the traditional cooking technique of boiling; and agricultural prosperity in England ushered in an era of cheap and plentiful food. By the twentieth century, per capita consumption of bread had dropped off precipitously due to social and economic modernization and the availability of a wider choice of foods.

The British blockade cut off regular food shipments to Germany, and hunger grew serious, especially in the "turnip winter" of 1917-1918, when people were reduced to turnips meant for horses. At the end of the war there were severe food shortages and famines in Eastern Europe.[1]

Severe food shortages were systemic throughout Europe during the war, except in Britain (which had an elaborate rationing system). In Germany memories of the turnip winter of 1917-18 (when people ate turnips because there was so little food) led the government to force occupied countries to ship large supplies of food to Germany. Elsewhere the black market flourished, as farmers secretly sold foods to the cities at prices far higher than allowed.

French cuisine and its effect on the Western World

The French are well known for their culinary achievements.[2]

The French are well known for their culinary achievements.[3]

Rebecca Franklin in her article entitled A Brief Introduction to French Food and Cooking wrote:

Immigrants to France and French cuisine

France has had a significant amount of evangelical Christian and Islamic immigrants in recent years. Many of France's immigrants are from former French colonies in Africa and Asia. According the Seattle Times article French cuisine, shaped by the immigrant experience, immigration is having an influence on French cuisine.[5]

The Communist systems of Eastern Europe and China privileged industrial workers, at the expense of farmers. Major famines took place in the Russian Ukraine in the 1930s (as the government removed grain from the countryside to force people to move to the cities), and in China (1959–61).

In Poland after 1945 modernization was accompanied by demands for more meat instead of bread by workers and in time also by the peasants. The new demands on meat production could not be met because of the government's policy of investing in factories, not farms. Increasing the performance of the government was measured by the availability of meat, and the performance was poor. Fearing mass protests, the Communist party did not balance the market by raising prices but instead spent its money on growing subsidies to keep food prices low. Every attempt to raise price caused grumbling; twice (1970, 1976) the government had to reverse the increases. By 1980 the scale of the imbalance of demand and supply led to the introduction of controls of meat and processed meat products, a system that broke down in 1989, when in view of roundtable talks and rumors about anticipated price increases, the farmers simply ceased selling meat. The final solution was introducing market prices in the summer of 1989. The chronic imbalance of supply and demand can be related to the coexistence of a system of trading and distributing food products that from 1948 was state-owned and subjected to the directives of the Communist ideologues and an agricultural sector comprising private farms and reacted to market stimuli.[6]

After Mao Zedong's Communists came to power in 1949 in China, they planned to provide industrial regions with a steady food supply, so they began compulsory delivery of agricultural products in 1953. In 1955-56 collectivization was accelerated. Dissatisfied with the achievements of agriculture, the Chinese leadership endeavored to catch up with the most developed countries. This resulted in the "Great Leap Forward" in 1958, which created large people's communes in the countryside. Home kitchens and utensils were destroyed to force families to eat in communal dining halls. The result was an unparalleled famine; upwards of thirty million died.[7] Mao Zedong finally change methods and by 1965 the level of agricultural production reached that of the years prior to the "great leap," but the country's population had by then increased by another eighty million. The upheavals of the Cultural Revolution of 1966-76 further damaged agricultural efficiency. The economic reforms initiated by Deng Xiaoping in 1978 were first introduced in agriculture. The return to family-based agriculture greatly increased peasant productivity.

Japanese farmers as late as the 1950s spent most of their income on rice as their staple diet and on fish and shellfish as subsidiary items. Landowning farmers, with higher incomes, also purchased meat, dairy products, and eggs. By the 1930s both groups had started making small purchases of Western-style "luxury" foods, nontraditional seasonings, and fruits. The Institute of Food Technologists defines food science as "the discipline in which the engineering, biological, and physical sciences are used to study the nature of foods, the causes of deterioration, the principles underlying food processing, and the improvement of foods for the consuming public".[8]

The South was pig country. The animals were easy to take care of—they fed themselves on mast in the forest, and came when called. Hogs could be herded and walked to distant markets, providing income for farmers from remote areas. Pork, ham and bacon—fried and covered with molasses—became popular in colonial days for all classes, including slaves and the rural poor. Hog-calling and hog-butchering became a ritual, as did the cooking and eating of barbecued pork. While pork's importance has diminished in the South, the continued popularity of barbecue and barbecue restaurants remains high.[9]

Immigrants from Europe 1840-1910 all had experienced hunger in their countries of origin. Irish, Italians, and Eastern European Jews looked at America as a place where food was abundant and available to all. The prospect of improving their limited, sometimes meager, diets was a major "pull" factor in their decision to emigrate to America. The new land fully delivered on that promise: Irish, Italian, and Jewish immigrants enjoyed a better, richer, more varied diet in the United States than they ever did in the past. The abundant availability of food significantly shaped subjective and collective identities. On the one hand, it helped redefine immigrants into free consumers in a single democratic market. In this perspective, the abundance of food that immigrants encountered in America function as a shaping element in a common American culture. On the other, these dietary revolutions made the construction of private and public ethnic rituals possible and thus played an important role in the parallel processes of “ethnicization” of immigrant groups.[10]

Diner (2001) shows that Italian immigrants created a symbolically lush Italo-American food culture based on their memories of crushing poverty and landlord exploitation in peasant Italy, while the Irish, whose ethnic memory linked colonialist starvation to collective identity, did nearly the opposite, eating because they must but refusing to elevate food to any sort of iconic status (such symbolization was reserved for hunger).

While sharing with other immigrants the deep impress of American material abundance, a conspicuous feature of which was a variety of protein-rich meals, eastern European Jews differed on account of the dense religious significance that centuries of halakic existence had imparted to their foodways. Diner (2001) depicts the sanctification of food in the shtetl, based on scriptural and rabbinic sanctions for eating well. Jewish political activism sometimes centered on food; witness the famous kosher meat protests of the turn of the century and labor struggles within the Jewish food industry. By 1929 waiters' unions controlled roughly eight hundred restaurants in New York City. When bakers, poultry handlers, and other food-industry employees went on strike, consumers overwhelmingly sided with the workers. Conflicts emerged between "experts" such as nutritionists and social workers and immigrant housewives, who were criticized for their unenlightened cookery. Immigrant Jewish women flocked to cooking classes, demonstrating their anxieties and aspirations about food and its Jewish and American meanings.[11]

Pizza caught on late and slowly in the United States. The first restaurant appeared in Lower Manhattan in 1905, but the popularity of pizza did not take off until the 1940s. With many changes from the old Italian recipes and interest in the market of returning GI's, by the mid-1950s, pizza was suddenly in fashion. It became a staple in school lunch menus in the 1960s, and with home delivery the cheap, easy-to-eat meal soon became the favorite food of millions of Americans, regardless of ethnicity.[12]

Ethnic entrepreneurs—such as the Swedish immigrant Carl Swanson of TV dinner fame and the Italian immigrant Hector Boiardi who morphed into Chef Boyardee—developed national brands that, lacking any clear ethnic markers. Businessmen whose products had no clear ethnic identity (Fleischmann's margarine) or who themselves had no connection to the ethnicity of the food they purveyed (such as the German immigrant William Gebhardt who developed a brand of Mexican foods) played key roles in the spread of ethnic foods to grocery stores consumers nationwide. The separation of ethnicity from entrepreneurship found its most influential expression in the fast foods of the late twentieth century—with Ray Kroc's Czech ancestry having no visible impact on the nature of McDonald's Egg McMuffin.[13]

The coming of television into homes starting around 1950s changed dining habits, leading to more informal lifestyles. Families started eating in front of the television set, so dining moved out of the kitchen and dining room. Changes came in food preparation and new cooking and dining equipment. Women's magazines instructed housewives on the best setting and introduced new products, such as vinyl furniture, frozen dinners, tray tables, and plastic dishes.

In the late 20th century with the growth of cultural studies and the new social history, the history of food began attracting more scholarly attention. Two book series appeared, Food in American History series by Greenwood Press, and Arts and Traditions of the Table: Perspectives on Culinary History series by Columbia U. Press. Food in England, the classic history of all things culinary in England from the Middle Ages by the social historian, Dorothy Hartley has been constantly in print since its initial publication in 1954.