The breakfast cereal industry in the U.S. is a $10 billion industry created by a dozen entrepreneurs and health food enthusiasts in the late 19th century. They invented non-meat breakfast foods that were easily packaged, marketed and consumed. Thanks to systematic national distribution and heavy advertising, their cereals became big business by 1910, transforming American eating habits. They built an industry controlled by four oligopolistic firms—originally Kellogg, General Mills, Post, and Quaker Oats and now Kellogg, General Mills, Kraft Foods, and PepsiCo—that control 83% of the market.[1] Worldwide they offer hundreds of branded cereals to millions of consumers of all ages, along with forty small regional or specialty firms.[2] Ferdinand Schumacher, a German immigrant, began the cereals revolution in 1854 with a hand oats grinder in the back room of a small store in Akron, Ohio. His German Mills American Oatmeal Company was the nation's first commercial oatmeal manufacturer. He marketed the product locally as a substitute for breakfast pork. Improved production technology (steel cutters, porcelain rollers, improved hullers), combined with an influx of German and Irish immigrants, quickly boosted sales and profits. In 1877, Schumacher adopted the Quaker symbol, the first registered trademark for a breakfast cereal. The acceptance of "horse food" for human consumption encouraged other entrepreneurs to enter the industry. Henry Parsons Crowell started operations in 1882, and John Robert Stuart in 1885. Crowell cut costs by consolidating every step of the processing—grading, cleaning, hulling, cutting, rolling, packaging, and shipping—in one factory operating at Ravenna, Ohio. Stuart operated mills in Chicago and Cedar Rapids, Iowa. Stuart and Crowell combined in 1885 and initiated a price war. After a fire at his mill in Akron, Schumacher joined Stuart and Crowell to form the Consolidated Oatmeal Company. In 1888, a trust or holding company combined the nation's seven largest mills into the American Cereal Company using the Quaker Oats brand name. By 1900 technology, entrepreneurship, and the "Man in Quaker Garb"—a symbol of plain honesty and reliability—gave Quaker Oats a national market and annual sales of $10 million.

Ready-to-eat precooked cereals was the next development, pioneered by Shredded wheat, which Henry Perky introduced in Denver in 1893. Perky soon built a national distribution system to grocery wholesalers nationwide. He sold out to the National Biscuit Company in 1928. In St. Louis William Danforth, with financial help from his wealthy father, bought a local firm manufactured feed for dairy cows and chicken feed under the Purina brand name. He capitalized on the 1890s health food craze and succeeded in having his cereal named the official breakfast food of the popular Dr. Ralston health clubs. Sales boomed, and human cereal became a major part of the business. However the Ralston-Purina Company by 1920 focused primarily on animal feeds

New breakfast-food concepts came from John K. Kellogg and Charles W. Post. The Battle Creek, Michigan, cereal industry rose from a combination of sincere religious belief and commercial interest in health foods. Dr. John H. Kellogg (1851-1943), son of an Adventist factory owner in Battle Creek was encouraged by his church to take an MD at the Bellevue Hospital Medical College in New York City in 1875. He became medical superintendent at the Western Health Reform Institute in Battle Creek, established in 1866 by the Adventists to offer their natural remedies for illness. Many wealthy industrialists came to Kellogg's sanitarium for recuperation and rejuvenation. They were accustomed to breakfast of ham, eggs, sausages, fried potatoes, hot biscuits, hotcakes, and coffee. In Battle Creek they found fresh air, exercise, rest, "hydrotherapy," a strict vegetarian diet, and abstinence from alcohol, tobacco, coffee, and tea. Kellogg experimented with granola; it resembled toasted bread crumbs. He boiled some wheat, rolled it into thin films, and baked the resulting flakes in the oven; he acquired a patent in 1891. In 1895 he launched Corn Flakes, which overnight captured a national market. Soon there were forty rival manufacturers in the Battle Creek area.

Charles W. Post, a former Kellogg patient, discovered a new angle, with Postum, a cereal coffee substitute that eliminated most of the caffeine found in regular coffee. "It Makes Red Blood," the Postum ads proclaimed. In 1898 he introduced Grape-nuts, the concentrated cereal with a nutty flavor and in the late 1890s Post joined the cornflake wars with Post Toasties. Good business sense, determination, and powerful advertising produced a multimillion-dollar fortune for Post in a few years. After his death in 1914 his company acquired the Jell-O company in 1925, Baker's chocolate in 1927, Maxwell House coffee in 1928, Birdseye frozen foods in 1929, and changed its name to General Foods in 1929. Philip Morris tobacco bought General Foods for $5.6 billion in 1985, merged it with its Kraft division, then spun off Kraft as independent.

William K. Kellogg (1860-1951) was a private and humorless man who had dropped out of high school and stood in the shadow of his flamboyant brother John. William, after working many years for his brother, in 1906, broke away, bought the rights from his brother and set up the Kellogg Toasted Corn Flake Company.[3] William Kellogg discarded the health food concept, opting for heavy advertising and commercial taste appeal. His signature on every package became the company trademark and insurance of quality. An experimental full-page ad in the The Ladies Home Journal in 1906 sent corn flake sales skyrocketing to nearly three thousand cases a day. By 1915 the company was investing one million dollars a year in product promotion. There were premiums, games, and inserts for children and teenagers, and lucrative contests for retailers. "Wink at your grocer and see what you get," invited one ad.[4] Kellogg devised a trade character—the "Sweetheart of the Corn," exemplar of the wholesome American girl—who smiled from every box of corn flakes. During the 1920s the company expanded by embracing technological advances and new products; in 1925 Rice Krispies exploded on the market, using better packaging and sealed wax paper liners to insured freshness and better shipping. By 1930 Kellogg's nine plants nationwide controlled 40% percent of the American ready-to-eat cereal industry, with an expanding international trade as well. 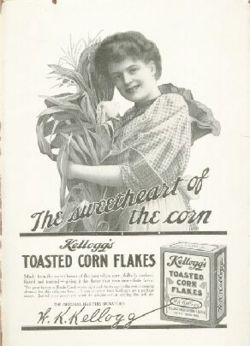 Early in the 20th century, the Quaker Oats Company (formed in 1901 to replace the American Cereal Company) jumped into the world market. Schumacher, the innovator; Stuart, the manager and financial leader and Crowell, the creative merchandiser, advertiser, and promoter, doubled sales every decade. Alexander Anderson's steam-pressure method of shooting rice from guns created puffed rice and puffed wheat. Crowell's intensive advertising campaign in the 1920s and 1930s featured promotions with such celebrities as Babe Ruth, Max Baer, and Shirley Temple. Sponsorship of the popular "Rin-Tin-Tin" and "Sergeant Preston of the Yukon" radio shows aided the company's expansion during the depression. Meat rationing during World War II boosted annual sales to $90 million, and by 1956 sales topped $277 million. By 1964 the firm sold over 200 products, grossed over $500 million, and claimed that 8 million people ate Quaker Oats each day. Expansion included acquisition of Aunt Jemima Mills Company in 1926, which continues as a leading brand of pancake mixes and syrup, the sport drink Gatorade in 1983, and in 1986, the Golden Grain Company, producers of Rice-A-Roni canned lunch food. In 2001 Quaker Oats was itself bought out by the much larger Pepsico.

National advertising in magazines and radio, and after 1950 television, was the key to the emergence in the 1920s of the fourth big manufacturer, General Mills. In 1921, James Ford Bell, president of a Minneapolis wheat milling firm, began experimenting with rolled wheat flakes. After tempering, steaming, and cracking wheat and processing it with syrup, sugar, and salt, it was prepared in a pressure cooker for rolling and then dried in an electric oven. By 1925 Wheaties had become the "Breakfast of Champions." In 1928 four milling companies consolidated as the General Mills Company in Minneapolis. The new firm expanded packaged food sales by heavy advertising, including sponsorship of such radio programs as "Skippy," "Jack Armstrong, The All-American Boy," and baseball games. Endorsements by Jack Dempsey, Johnny Weissmuller, and others verified the "Breakfast of Champions" slogan. By 1941 Wheaties had won 12% percent of the cereal market. Experiments with the puffing process produced Kix, a puffed corn cereal, and Cheerios, a puffed oats cereal. Further product innovation and diversification brought total General Mills sales to over $500 million annually (18% in packaged foods) by the early 1950s.

After 1980 the same companies dramatically increased the variety of the basic cereals. A typical supermarket might carry 100 varieties, flavors and sizes of oatmeal. Heavily sugared cereals appealed to young eaters. Lest customers stray to the produce department, dried fruits were added to the cereals. Health advice was added, and after 1990 granola-type blends became popular. After 2000 the search was on for "natural" foods, a turn full circle to the health food origins in Battle Creek.

The cereal industry followed the pattern of many American manufacturing organizations. Responding to perceived needs and consumer demands, innovators launched new products. From these beginnings emerged national corporations with larger capital bases to handle the business of mass production, nationwide distribution, and heavy advertising expenditures. Imaginative entrepreneurs used the new mass media both to acquaint consumers with their products and to create demand. What was unusual about the industry is the oligopolistic control by 4 companies—much like the automobile industry before it was open to foreign competition in the 1970s. Cereal firms lacking a national advertising base went out of business or were bought out. There remain niche markets such as local firms and specialty foods that allow small companies to operate. By the indicators used by industrial-organization economists to measure market structure, company conduct, and social performance, the industry ranks at the extreme oligopolistic end of the range of food industries. In this type of environment, the result is normally higher prices to consumers. For the cereal industry, 20% of the shelf price goes to the grocery store, 36% to the factory, and 44% to profits, advertising and distribution.[6] In recent years the most popular brand has been Cheerios from General Mills, with sales over $500 million a year, bolstered by over $20 million a year in national advertising. Kellogg's Frosted Flakes is No. 2, with sales of $250 million.[7]